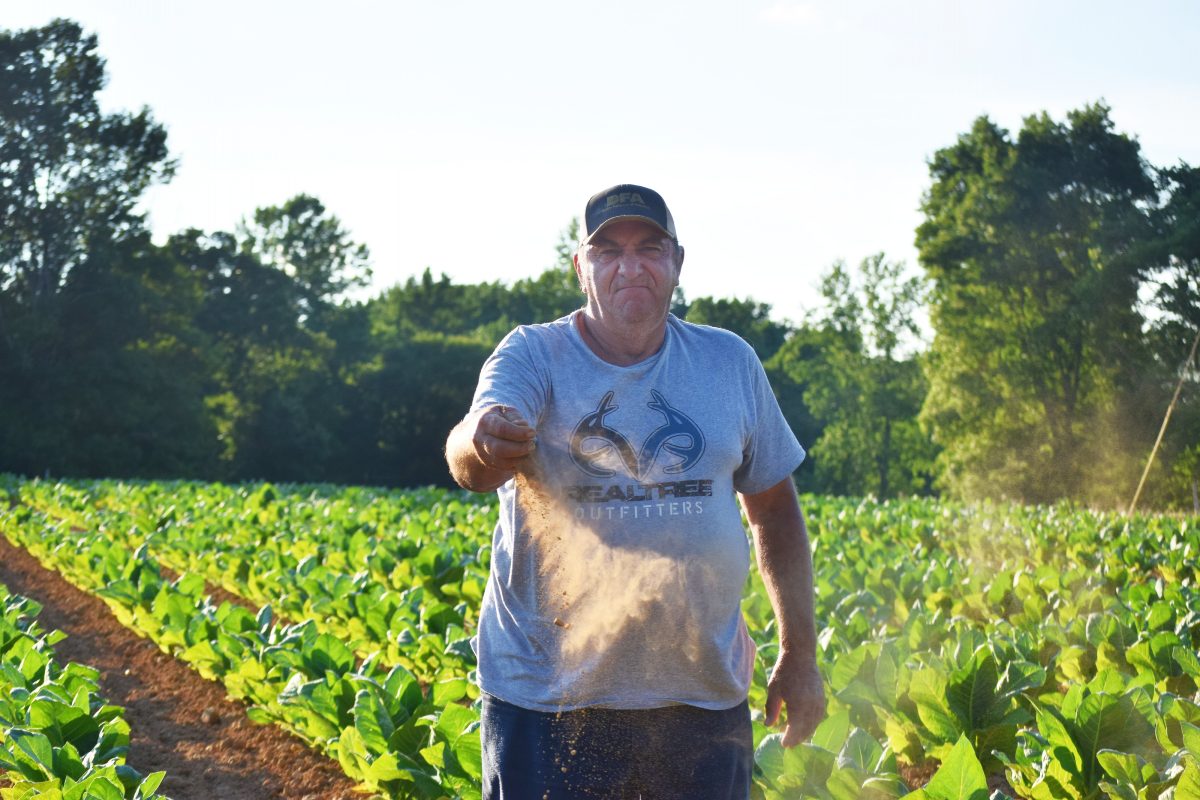 Freddie Jewell of Canmer uses a handful of dirt to demonstrate how dry the ground is in one of the tobacco patches raised by him and his wife, Becky. (Photo Credit: Mary Beth Sallee)

Will Rogers once said, “The farmer has to be an optimist or he wouldn’t still be a farmer.”

Lately, that optimism has been in hopes of rain.

The current US Drought Monitor shows that most of Kentucky classifies as “Abnormally Dry,” with a growing percentage, including Hart County, in what is considered a “Moderate Drought.”

During the last week of June and beforehand, Kentucky experienced above-normal temperatures and below-level rainfall, which has left many farmers in a bind.

Carol DeGroft and her family own PFV Farm in Cave City and have downsized recently to just work hay, along with a few beef cattle.

“As I’m driving along, I look at pastures drying up,” said DeGroft. “You can tell where the limestone ridges are in the fields, because they’re the brownest. I look out at the corn that got put in late, and it’s not two-foot-tall. Some of it looks like it’s about to spike tassel, and I think ‘Lord, we need rain.’”

The DeGrofts recently lost some of their hay due to a field fire. While they are thankful that damage was minimal, it couldn’t have come at a worse time.

“That’s a lot of money that goes up in flames,” said DeGroft. “Nobody was in the field. We don’t know if maybe the tractor struck a rock and it sat there and smoldered, but it spread quickly.”

A neighbor helped move farm equipment to prevent further loss, but even a few bales can impact livelihood during an already strained season.

“The price of fuel that you’ve invested, and your time, and even crop inputs are so outrageous this year, and now there’s a drought” added DeGroft. “It’s a struggle. We were hoping to make a lot more hay, but then the drought happened. There is a field that we should be making a second cutting on, but we’re going to be lucky to get two cuttings this year.”

In neighboring Horse Cave, Jonathan Robertson, who grows hay, beans, and corn with his brother, is facing a similar situation.

“The only thing you can do to combat it is pray for rain and keep an eye on the cattle,” said Robertson. “Pastures are shot. Hay is short already. The first cutting was short and now we’re feeding it already. The corn is going through pollination right now. It’s critical that it gets water during this time, and I’m afraid if we don’t get it this weekend, it’s going to be done.“

The Hart and Barren County areas haven’t faced drought conditions this extreme this early in the year since 2012 when the region went more than a month without rainfall. Many crops, especially corn, were lost that year.

“I don’t know what the effects will be, but I do know this is our highest input this year,” said Robertson. “Fertilizer and fuel are at an all-time high, and now we’re not going to get anything on the return, so it could be devastating if we don’t get some water.”

Dennison’s Roadside Market has fared a bit better, thanks to their ability to irrigate their crops, but they have still felt the impact of the drought and the high temperatures.

Because they typically irrigate certain crops such as tomatoes and watermelons, they were able to improvise recently to get water to their sweet corn through their drip tape irrigation system.

Drip tape is a pipeline with a dripper manufactured inside the pipeline. The tape lies flat until pressurized, and the low water flow method delivers water steadily into the soil.

“We’re really not set up to do that, but it was reaching the state where (the corn) was really suffering, so we irrigated with drip tape,” explained Paul Dennison. “We ran it by each corn row, and we pumped water through that drip tape. We had to run it for several hours and haul water (in tanks). It’s really helped, but it’s really taken a toll. It’s caused us extra work.”

Dennison did report that their tobacco, cabbage, and hay are beginning to suffer, but in the long run, he doesn’t anticipate the drought will have too big of an impact for their loyal customers.

“I don’t think it will affect us on the vegetables that we grow for the market,” said Dennison. “I really do appreciate people buying from us. We certainly could not do this if they didn’t buy from us, so I’m very appreciative and feel very blessed.”

In Canmer, Freddie and Becky Jewell have tended to their crops by hand, as they always do.

“The problem, without a doubt, of how the rain is affecting tobacco is it’s stunted it, and it’s going to make the quality of the tobacco very poor leaf wise,” said 69-year-old Freddie Jewell. “If we don’t get water pretty quick, it’s not going to do nothing at all. Everybody that’s got any kind of crop at all is going to be hurting bad – that’s corn, soybeans, tobacco, hay, whatever you’ve got.”

The Jewells have re-set their crops by hand, carrying buckets of water as they go, so it’s especially devastating to see their hard work threatened by Mother Nature.

Jewell said his tobacco is not blooming yet, but is still holding its own.

“It’s still got green to it and it’s getting to start turning a little yellow down at the bottom leaves,” he explained. “I think that’s from heat and the heat from the ground, but it’s still holding. I don’t see how. He’s (the Lord’s) gotta be helping it out… It all depends on the weather completely with any farmer’s crop. It doesn’t matter who it is. Us farmers are at the mercy of everything and everybody.”

“We’ve reset and packed water three times (on one crop),” added 68-year-old Becky Jewell. “We done what we could. The rest of it is up to the Good Lord.”