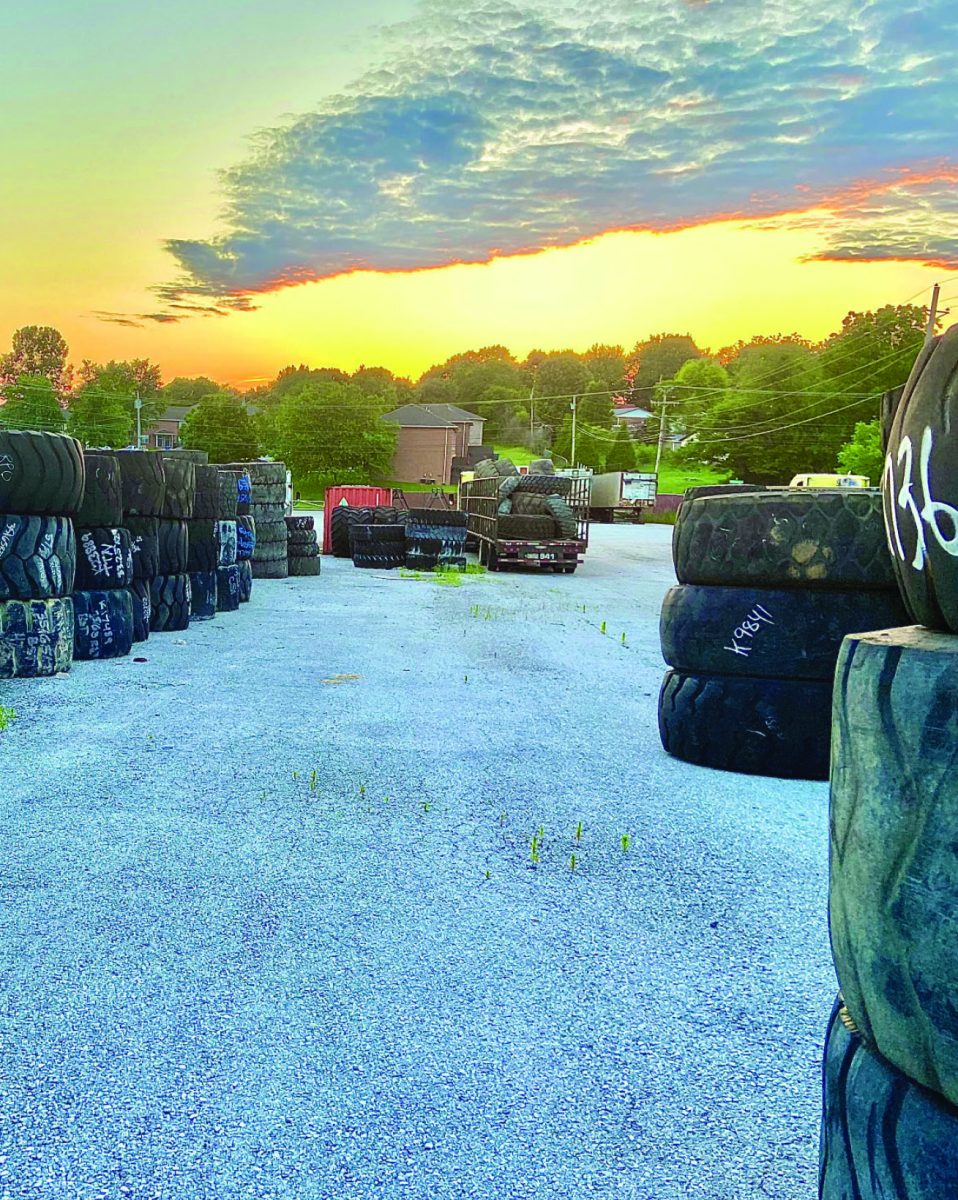 Piles of tires stacked head high with insides filled with water. It would require someone to climb on them or use a ladder truck to spray the inside areas holding the water. Neighbors say this has never been done. Photo by Jeff Jobe

Whether it is mosquito codes, maintenance codes or any code, it should not matter if you are a corporation, politician, government entity or private citizen. We must all be held to the same requirements to protect those who do.

This is a very simple thought to write but, in reality we are seeing it a little more difficult to enforce in Glasgow and Barren County.

In this issue of the Barren County Progress, we will detail how our officials are allowing one company to play legal dodgeball with one very clear code, the mosquito code.

Glasgow residents Sherry Myers, Rita Jessie, and most everyone living in the Pocahontas Trail, Indian Hill Subdivision, and Honeysuckle Lane areas of Glasgow have signed a statement asking for the Glasgow Mayor and City Council to force the property owner at the corner of Honeysuckle Lane and Rogers Road to comply with Glasgow’s mosquito code.

For years dating back to 2012, the property and business once known as BR Tire and Retreading would deal with the issues by having tires moved, covered, sprayed, and larvicide pellets placed in them to control the mosquito population.

However, since the ownership change to Bradley Reagan, it seems residents in the area are seeing the issues get progressively worse.

“Nothing has been done for years, and mosquitoes are out of control again,” said Sherry Myers.

“We can’t even plant flowers in front of our home because we get eaten alive,” said Rita Jessie.

Myers and Jessie had never met or discussed this issue until it popped up in a social media discussion on a Facebook opinion site called The Glasgow Voice. Naturally, their anger was directed at code enforcement but in our research we have found this is not where the current problem lies.

In a May 12, 2022 letter, Myers detailed the issues she has had with mosquitoes since moving to the home she now lives in. She spoke of how it was in control at one time because of preventative measures but with nothing like that now, it breaks her heart to see neighborhood children with dozens of bites all over them.

On March 9, 2020 the Glasgow City Council approved a code 95.03 (a) It is unlawful for any person owning property or having property in their possession upon which tires are not stored under a cover to keep those tires in open areas and if not covered unless they spray those tires with an insecticide at least weekly for insects during the period of March 1 to December 1 of each year.

Code Enforcement records show the complaint was received on May 12, 2022. Officer Sheryl Pena made calls to Reagan, the owner listed of the Rogers Road property on May 13, 2022.

May 16, 2022 was a big day for Pena and begins what is very clearly a valiant effort from a city employee diligently trying to do her job.

Records show she visited the site, formally filed the complaint and met with property owners and witnessed the mosquitoes in action. Also that day, she received a call back from Reagan who gave her the attorney’s name handling what appears to be bankruptcy involving the property and tires.

On May 18, 2022, Pena sent an email detailing the issues to the owner of the company and on May 19, 2022 she requested contact information for the bankruptcy trustee. She indicated they must get the preventative measures going while detailing the code violations.

On May 20, 2022 Pena spoke with a Louisville lawyer associated with the bankruptcy who said he can authorize spraying for one to two months, and he agreed the tires must be removed. Notes indicate he was going to speak with the North Carolina owner (Reagan) to remove the tires, take to North Carolina, shred them or whatever needed to remove them. On this same day, she spoke with the Mayor in regards to having road right of ways mowed and tree lines sprayed.

On May 31, 2022, the “Trustee” informed her he had filed some procedure on Friday, May 27, 2022 to permit the tires to be legally removed. She followed up on scheduling pest control with the trustee and a local company to perform the spraying.

The local pest control company was phoned on June 1, 2022 and several attempts had Pena confirm spraying the weekend of June 5, 2022. She again reached out to the trustee on June 6, 2022 in hope of scheduling the next spraying. In a Zoom meeting on June 7 with the trustee, he told Pena he hoped to have the tires removed by the next spraying. Spraying scheduled monthly but the code is very specific that to have uncovered tires on site they must be sprayed weekly.

She has documented that the City of Glasgow made their second spraying on June 7, 2022. The first was May 25. They sprayed YMCA Way, Pocahontas, West Main, Honeysuckle, Rogers Road, and neighborhoods in those areas.

On June 10, 2022 Pena said, “I still have no date for the tires to be removed, but this is what I am told is happening.” Residents have had glimmers of hope over the past few years by seeing some tires removed to only be crushed with tractor and trailer loads marking their way back.

Clearly, Codes Enforcement Officer Sheryl Pena has went well beyond what one might expect in regards to the mosquito issue and doing her job. At what point should the citizens of Glasgow being eaten by mosquitoes have help from the Council, Mayor, and City Attorney?

It is time to have the tires removed for good and put an end to legal dodgeball.

* In parts 2 and 3 of “Dealing with Codes” the BCP will detail how some can just ignore codes with no penalty and how some of those who should lead by example are the biggest violators. These violations contribute heavily to distrust in how we feel about ourselves as a community.