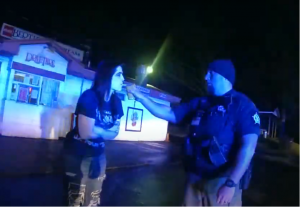 In this still-shot from body cam footage released to the Edmonson News, Sarah Harrison, right, is being administered a breathalyzer test by ECSO Deputy Jordan Jones.

After nearly three months since her original arrest on April 7, unanswered questions and unexplained inconsistencies continue to surround the case of Sarah Harrison.

Last week on June 22, Harrison was to appear in court in Edmonson County. According to Harrison, she was appearing that day to learn of custody and reunification efforts regarding her son, Jameson, who is autistic and nonverbal. 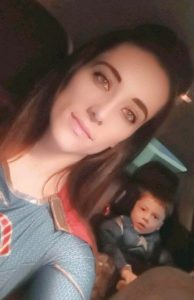 Sarah Harrison with her son, Jameson, on Halloween of 2021. Photo submitted.

However, on the day of June 22, Harrison stated that she was approached by an officer and was told that there was an indictment warrant issued for her arrest. She was then arrested and placed in handcuffs. She was later lodged in the Hart County Jail.

Through a telephone conversation from the jail, Harrison conveyed to the Edmonson News details from that day.

“I went to go to family court, and after I got there, like 10 minutes in, they had pulled me to the side and given me an indictment warrant for the same crime twice that I didn’t commit the first time,” Harrison said. “They claimed that I was driving under the influence, wanton endangerment, resisting arrest, careless driving, and intimidating a witness in legal proceedings.”

Harrison said that she was in court last week to see about the situation involving her son.

“Instead of it being about him and only about him, they had first arrested me and given me an indictment warrant before I was even required to go to the stand,” Harrison said. “And they had taken me to the back and put me in cuffs, and after I was given an indictment warrant, they had me go to the stand and they had told me that afterward, I was going to be booked in the Hart County Jail. There wasn’t much I could say. I couldn’t argue.”

Harrison said that the handcuffs were on her at the time of which she was to go before the Judge during her case in Family Court. According to Harrison, the last time she saw her son was virtually three days prior to her arrest on June 22.

“Every time I try to go see him, they’re threatening me with charges, threatening to arrest me,” Harrison explained. “…They shouldn’t have arrested me. I was just going there for Jameson.”

On the night of Harrison’s first arrest on April 7, a blood test was administered to Harrison at the Med Center of Caverna in Horse Cave (as she was being lodged in the Hart County Jail). That test was sent to the Kentucky State Police crime lab.

According to sources, the KSP test result was received on June 24 and showed that Harrison had tested positive for amphetamine. Again, sources say that his test result came in on June 24 – two days after Harrison’s arrest on June 22 – and also approximately 35 days after Harrison was indicted in Edmonson Circuit Court on May 20, of which the charges of DUI and wanton endangerment were reinstated against Harrison, even though those charges were previously dismissed in District Court due to lack of evidence.

As of June 24, the Edmonson News had yet to receive a copy of the KSP blood test results. However, if the results do show that Harrison had amphetamine in her system at the time of her arrest, it is important to understand what amphetamine is and what medications and/or drugs can yield a positive test result.

According to the WebMD website, amphetamine is a stimulant drug that may be taken legally when prescribed by a doctor. Amphetamines can also be deemed illegal if taken without a prescription and/or if misused as a study aid or to get high.

Amphetamines, when prescribed by a doctor, can be used to treat medical conditions such as attention deficit hyperactivity disorder (ADHD) and narcolepsy, a condition that makes a person sleepy during the day.

The most commonly prescribed amphetamines are Adderall, Dexedrine, and Vyvanse.

Amphetamine, even when used as a prescription drug, can show up as a positive result – and possible illegal substance – on a drug test. 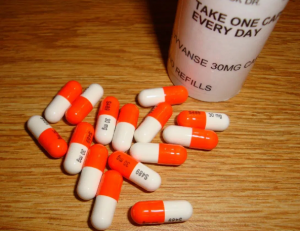 Vyvanse is a prescribed medication used to treat ADHD. In a drug test, Vyvanse can show up as an amphetamine. Photo: Medical News Today website.

In a previous phone interview conducted in May, Attorney Gary Logsdon stated that Harrison has medical conditions that require medication, one of which is ADHD. Logsdon also stated that Harrison was in fact receiving a prescription medication to treat her ADHD diagnosis, although during the phone interview on June 22 from jail, Harrison stated “not anymore” when asked if she was on any medication for the treatment of ADD or ADHD.

In information provided to the Edmonson News, at the time of her arrest, Harrison may have had a medical prescription for Vyvanse to treat her ADHD medical condition. Vyvanse is a stimulant medication approved by the Food and Drug Administration (FDA) for the treatment of ADHD.

The active ingredient in Vyvanse is lisdexamfetamine, a pro-drug of dextroamphetamine, which is a type of amphetamine.

The American Addiction Centers (AAC) website states that the detectability of any drug in a person’s system depends upon numerous factors.

Therefore, if Harrison was taking a prescribed medicine such as Vyvanse for an ADHD diagnosis, this could have caused Harrison’s KSP blood test to yield a positive test result for amphetamine.

In the state of Kentucky, amphetamine is considered a prohibited substance while operating a motor vehicle. Therefore, any test that shows a person is positive for amphetamine while driving may result in an arrest.

Per Kentucky Revised Statute (KRS) 189A.010, “(1) A person shall not operate or be in physical control of a motor vehicle anywhere in this state…(d) While the presence of a controlled substance listed in subsection (12) of this section is detected in the blood, as measured by a scientifically reliable test, or tests, taken within two (2) hours of cessation of operation or physical control of a motor vehicle…”

Furthermore, subsection (12) of KRS 189A.010 states that there are at least 16 substances that would allow for an individual to be prosecuted if test results show that the substance was in the person’s system while operating a motor vehicle. Among these 16 substances is amphetamine. Again, amphetamine is an active ingredient in many prescribed medications, including Vyvanse used for treating ADHD.

It should also be noted that KRS 189A.010 further states in subsection (4)(b) that “…a laboratory test or tests for a controlled substance shall be inadmissible as evidence in a prosecution under subsection (1)(d) of this section upon a finding by the court that the defendant consumed the substance under a valid prescription from a practitioner, as defined in KRS 218A.010, acting in the course of his or her professional practice.”

However, also per KRS 189A.010, a laboratory test showing that a controlled substance was in a person’s system may be admissible as evidence against a defendant in court if a person was operating or in physical control of a motor vehicle anywhere in Kentucky while under the influence of any substances, including amphetamine, which could impair one’s driving ability.

Harrison’s case is similar to a separate case in Tennessee involving Katie Slayton.

According to news sources, on September 22 of 2021, Slayton was arrested after she was administered field sobriety tests and failed to stand firmly on one foot and also was off balanced when walking with one foot in front of the other. On the police body camera footage, Slayton told officers that she takes Prozac and Adderall for ADHD.

Slayton was arrested and charged with DUI. Her son, who was with her at the time, was taken into custody by the Tennessee Department of Children’s Services (DCS). The blood test that Slayton was administered after her arrest took six months to yield a result, and her son remained in state custody for a total of nine weeks.

Slayton’s blood test revealed that she was positive for amphetamine, but within therapeutic levels, due to her medication for ADHD. Therefore, she was falsely arrested and charged with DUI.

The Edmonson News has retained body cam footage from the night of Harrison’s arrest on April 7. In an effort to provide transparency to our readers, the Edmonson News will address the body cam footage and provide an update regarding the case in next week’s newspaper. It is then that we will also provide statements received from the Edmonson County Sheriff’s Office and the Kentucky Cabinet for Health and Family Services.

Reporter’s Note: These cases are tough and difficult to write about as we only have one side of the story. Consequently, we can’t know the other side of the story because of confidentiality and/or legality reasons.

Many of our readers, not only in Edmonson County but throughout our Jobe Publishing regional area, have become aware of the case involving Sarah Harrison. For those who aren’t familiar, this is a brief outline of the information that our newspaper has previously published.

– Harrison was originally charged with operating a motor vehicle while under the influence of drugs and/or alcohol (DUI), wanton endangerment (1st degree), resisting arrest, and careless driving.

– Harrison’s son, Jameson, was with her at the time of her arrest. He is five years old, autistic, and nonverbal, relying on his mother for care and for communication through sign language.

– As of May 11, Jameson had been placed in three different foster homes since April 7.

– Harrison stated that at the time of her arrest, she had passed a breathalyzer test. She also stated that she later passed a hair follicle test which showed that she was negative for all illicit drugs and had not engaged in illicit drug use over the past 60 days.

– Attorney Gary Logsdon stated that two of the four charges against Harrison – the DUI and the wanton endangerment charges – were dismissed in District Court due to lack of evidence.

– On Friday, May 20, Harrison was indicted in Edmonson Circuit Court for resisting arrest, careless driving, and intimidating a participant in the legal process. Harrison was also indicted that day on the two charges of DUI and wanton endangerment, even though these charges were previously dismissed.

– When asked how or why the charges of DUI and wanton endangerment were reinstated against Harrison in Edmonson Circuit Court, neither Attorney Stacy Ivey (representing Harrison) or Blake R. Chambers (Commonwealth Attorney for the 38th Judicial Circuit) would provide additional information due to legality reasons.

The latest information regarding the Sarah Harrison case is provided in a full story in this edition of our newspaper.