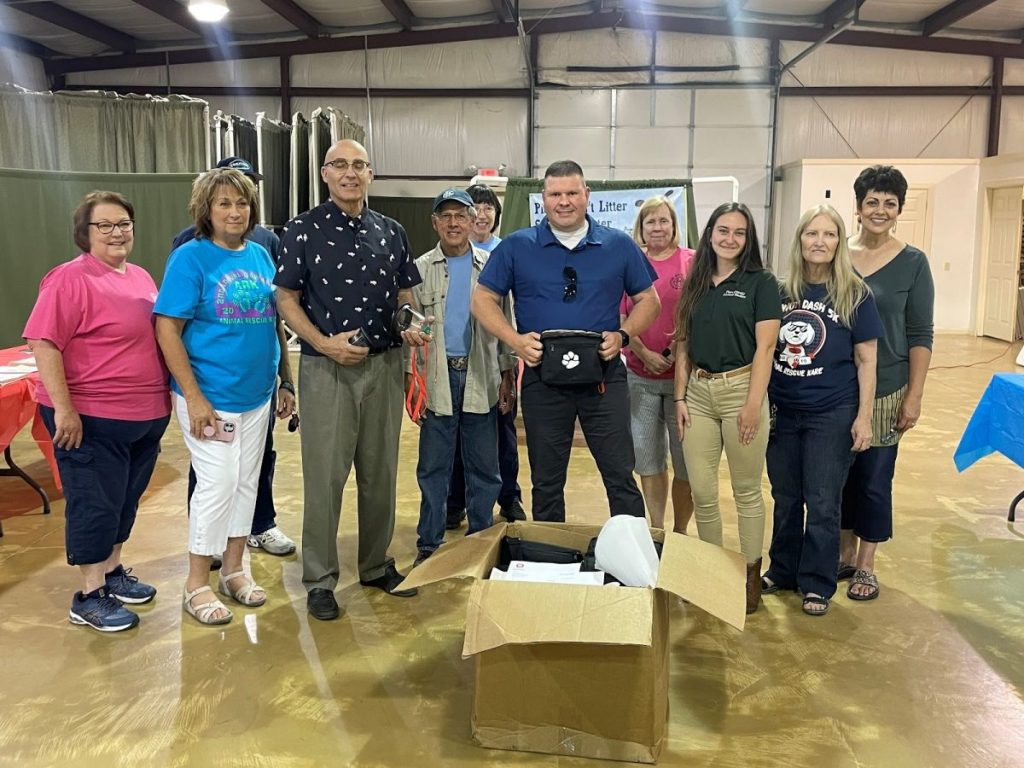 A California-based non-profit has donated 20 pet oxygen mask kits to Hart County through former ARK Board Secretary Wesley England, who has a long history in public service in the county.

England first applied for a grant through Air for Paws in 2021 and was quickly approved for 20 kits. Due to their high demand, it took nearly a year to fulfill the grant.

According to the company, it is estimated that over 40,000 pets die in fires each year from smoke asphyxiation, not counting police K-9 units involved in health-related incidents. Air For Paws was created with the goal of getting pet oxygen masks on board every fire, police, and emergency medical service rescue truck.

“During the process, I’ve made great friends with the founder and president of the program, Terry Moriyama,” said England. “Terry has been instrumental in guiding me through this process and giving me pointers and ideas for future programs to benefit the citizens of Hart County. To date, she has provided 1,669 kits to fire and police personnel. She has also shipped 115 kits to the military working dog detachments and weapons of mass destruction teams. For us to receive 20 of her kits in Hart County is phenomenal. We are only the fifth county in the state to receive these life-saving kits. Our small county has been added to a list of some of the largest rescue agencies in the nation, including CAL Fire (California Fire/Los Angeles), San Jose Police Department’s K-9 Units, San Jose Fire Department, California Fish & Wildlife, and the US Army, Navy, Air Force, Marines, and Coast Guard K-9 Units.”

Each kit is valued at $100, so Hart County received $2,000 worth of lifesaving equipment for animals for free.

“I still currently serve as a Paramedic/Firefighter in the city of Louisville, and over the last couple of years, I have personally witnessed these kits being used twice, and they work,” said England. “I’ve heard multiple stories of these kits being used in Jefferson County. Each time, they have had success reviving family pets or getting them the emergency help they need, when often they are overlooked.”

In collaboration with Air For Paws, England has allocated two kits for each fire department in the county (Hardyville, Bonnieville, Munfordville, Cub Run, and Horse Cave), as well as one for the Hart County Rescue Squad. One unit each will be going to the handlers of K-9 units for the Hart County Sheriff’s Office, Kentucky State Police (serving in Hart County), and Kentucky Fish & Wildlife. Four units will be donated to the Hart County Ambulance Service to be placed on their ambulances. The remaining unit will be placed at the Animal Shelter for medical emergencies.

“Upon applying for the grant, I knew I wanted my county of residence to receive the first round. Hart Countians are near and dear to my heart,” England said. “I have already been approved for a second round of kits, which I will be sending to the city of Radcliff Police Department, where I’m currently employed, and the Radcliff Fire Department. I will then work toward providing kits for the rest of Hardin County.”

These kits are not only for unresponsive animals, they can also be used for animals that suffer exhaustion, or are in need of supplemental oxygen to get back to a functioning level.  This includes K-9s who come in contact with fentanyl or heroin while searching a vehicle.  These kits can be used in conjunction with Narcan if a working K-9 unit comes in contact with an illegal substance.

“I hope these kits are never needed,” added England. “However, I want every agency in Hart County to be prepared with the equipment available if a situation arises.”

Shelter Coordinator Brandy Nichols and ARK will oversee the training and distribution of the kits within Hart County.

For more information or to donate or sponsor kits, please visit www.AirForPaws.com.