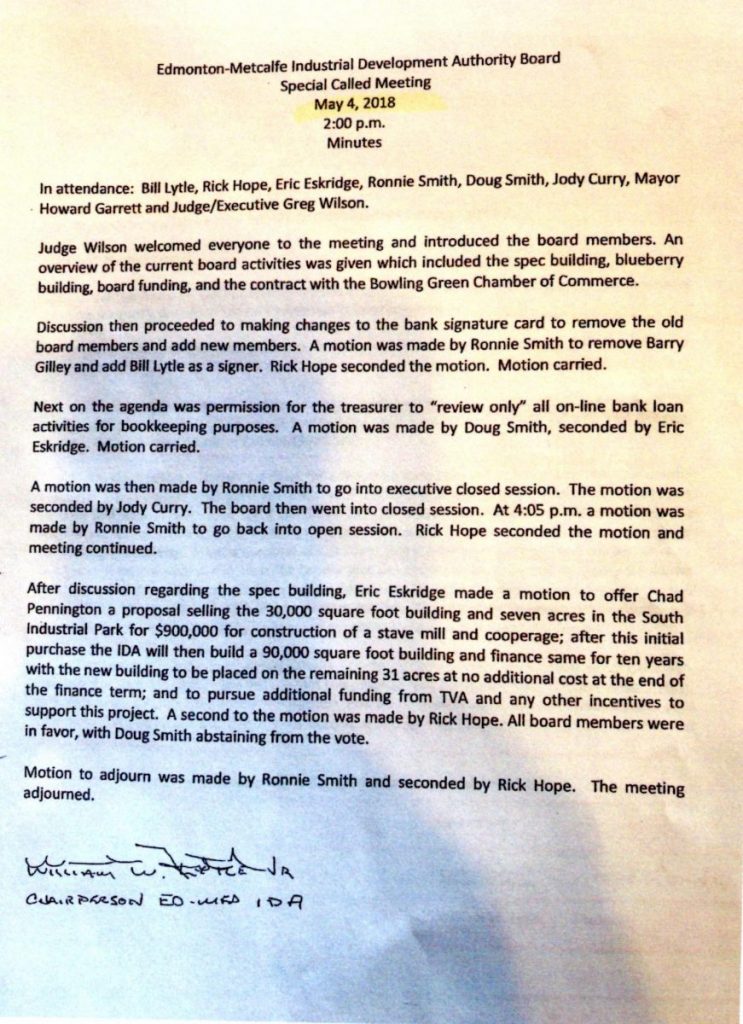 A scanned copy of the meeting agenda for the May 4, 2018 meeting. Note the next to last paragraph. The Herald-News archives

The Edmonton Metcalfe Industrial Development Authority (IDA) met in a regular session on June 20 with South Industrial Park work on the agenda.

First discussed was construction progress for the fit-up of the spec building to house Pennington Stave. The construction is on schedule with plumbing, electrical, and gas line work in process.

The prior delay for the 3,000 amp switchgear (April 2023) has been resolved. The alternative option is to daisy chain three 1,200 amp panels which will move the time up to August 2022, which has been approved.

After Chairman Wes Jolly asked for ideas/solutions for the approximately $428,000 overrun costs, the discussion took a loud argumentative turn.

Once again the TVA/RDAAP money use was brought up and Jolly explained that the money is being held in an account and it is not being used, however, that is the fiscal court’s choice and it is not the IDA board’s money to use.

When asked again what the fiscal court’s plans are for the TVA/RDAAP money, Judge/Executive Harold Stilts explained that the county was looking toward further industry options, perhaps on the 10 acres that were set aside in the South Industrial Park for other development. The mention of using 10 acres shocked everyone in attendance. This threw the meeting into complete chaos with everyone speaking up objecting to the usage of the 10 acres, some voicing that was not mentioned nor agreed upon.

Mark Linkous put the goal of the meeting back into perspective by saying, “I’m not for sure what we’re debating. We have a lease and we need to borrow some money to fit this building up. That seems like that’s the issue and the things you all are talking about are side issues. We have a commitment to this guy to fit the building. Let’s just borrow the money and move forward.”

Mayor Doug Smith replied, “Yeah, but we have other issues at this point because they’re trying to take the uh [paper handed to him] this is the agreement that was done on May 4, 2018…and we also have a formal proposal right here on May 7th, but they pretty much read the same. In it, it says, [reading from agreement copy] as you well know this building will set on the remaining 31-acre tract owned by the Industrial Board.” 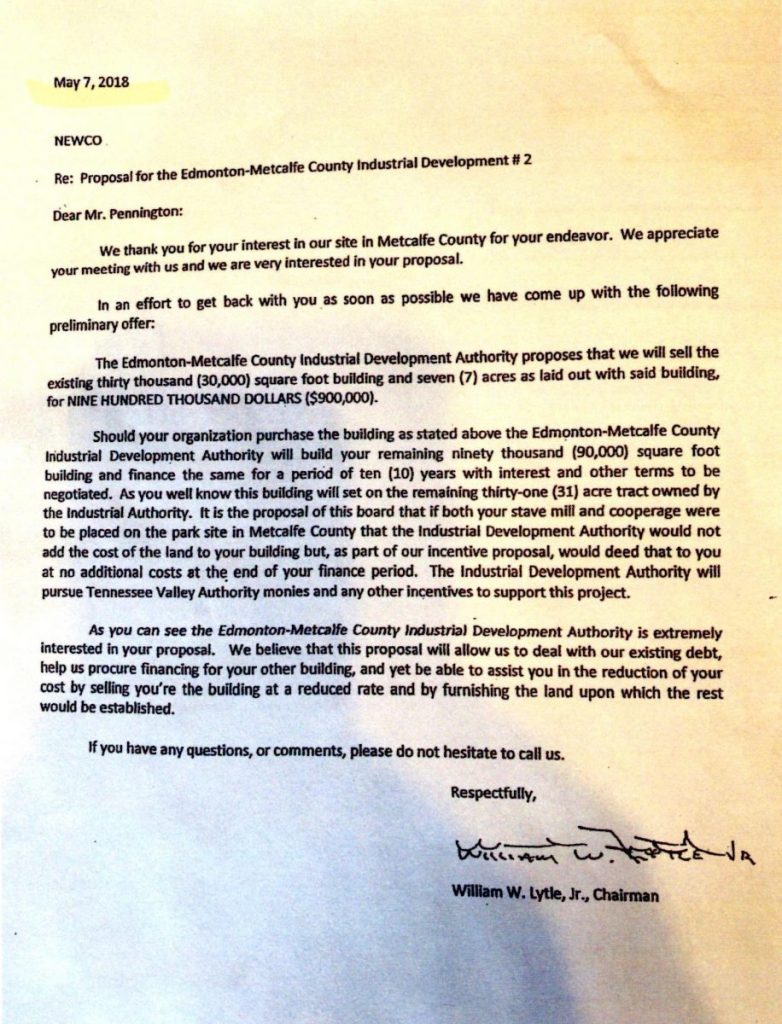 A scanned copy of the actual proposal letter dated May 7, 2018. Note the wording of the larger paragraph. Copy of original in possession of Chad Pennington

Chad Pennington read from the May 7, 2018 proposal copy, “Prior to that it said, the Industrial Authority will build the remaining 90,000 square foot building on the…”

He was cut off by chairman Jolly, “I’m not disputing that that was the intention or proposal that was put to you Chad. That has yet to occur right. We’ve yet to come to an agreement…”

“That was only a proposal,” exclaimed Stilts.

“I agree with Mark. We’ve got to get you into the building now,” said Jolly. Adding that the acreage proposal is a side issue.

“I mean, I would be for just borrowing this money. It’s going to be amortized back and we can move on,” stated Linkous. Pennington agreed.

Jolly then read off the numbers that he had roughly calculated to show the board the status over the next 15 years of the loans to Pennington Stave and Cooperage…“The city nor the county will be responsible for any of that, because Chad would be making the payment back, or I shouldn’t say Chad, Pennington Stave, and Cooperage would be making the payment back against $978,100 over 15 years at 4% which amortizes at $7,234.89 a month.”

The exact dollar amount depends upon ESB and the actual percentage of interest calculated on the overrun loan amount.

Back to the discussion of the 31 acres in the original agreement, Chad Pennington explained the situation “I had a meeting with a distillery Monday, and as you also know we have a company that is already committed to buying staves from us. Basically what I’m telling ya is I can sell more staves right now than I can make. So one of the things that we’ve been discussing is getting a second stave mill line put in. Also, about 2 weeks ago, one of the biggest barrel makers in the state came to Edmonton looking for us.”

“What they’re wanting to do is get us to that cooperage faster. They’ve offered to help supply logs, timber, buy the staves from us. What I’m getting at guys is, this has become what I was hoping for by year one and a half or two. We’re talking about some big outfits. So what I need to know is that the proposals that we got for the acreage and then what we went into this with the phase 1 and the phase 2 with the stave mill being phase 1, the cooperage being phase 2 that is the understanding. Because what we’re planning for is to build out this stave mill to mass capacity then put that cooperage out there as well. And for us to do that we’ve got to have the building and the land that we were promised in the proposal.”

Jolly replied, “Chad I can’t speak for everyone, I can speak for the board and tell you that we’re excited for that. I think that’s a wonderful thing…my gut feel when I went before fiscal court…I think what they’re looking for probably is for this first phase to get off the ground. See this thing doing what we say it was going to do and then, ya know, then I think everybody’s going to take a look different…this has been a 3-year project coming, getting this thing.”

“You gotta have some faith and foresight to see what’s coming,” noted Smith.

The following is an exert from the actual May 7, 2018 proposal letter from the IDA to Pennington:

Should your organization purchase the building as stated above the Edmonton-Metcalfe County Industrial Development Authority will build your remaining ninety thousand (90,000) square foot building and finance the same for a period of ten (10) years with interest and other terms to be negotiated.  As you well know this building will set on the remaining thirty-one (31) acre tract owned by the Industrial Authority. It is the proposal of this board that if both your stave mill and cooperage were to be placed on the park site in Metcalfe County that the Industrial Development Authority would not add the cost of the land to your building, but, as part of our incentive proposal, would deed that to you at no additional costs at the end of your finance period.