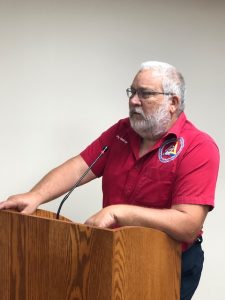 Gary Fancher explained the FEMA issues to the court. Photo by PJ Martin

The Metcalfe County fiscal court met on Tuesday, June 14th with all in attendance except Magistrate Donnie Smith.

Kentucky Emergency Area 3 Manager Gary Fancher updated the court on the status of unpaid KYEM-FEMA monies. “They [FEMA] are currently working on the reports that Emory [Kidd] has sent in. I can tell you, the reports that he has sent in has gone a long way with trying to figure out some of the issues we had with duplicate funding. Funding from, some of it dated back as far as 2010 that they couldn’t figure out.”

Fancher has been documenting specific locations of damage repaired under FEMA claims to separate it from work done with state emergency road aid. FEMA requires GPS coordinates of work done for their claims.

“Before we can start putting FEMA funds back into the county we have to get the county back in compliance,” explained Fancher. The purchase order (PO) system has been referenced in several past audits of 2018, 19, and 20, specifically with the cancellation of POs. “Until I get some type of documentation showing that we have corrected these deficiencies…,” said Fancher. Which means that no money will be received from FEMA until the past audit issues with inaccurate purchase orders is corrected.

Judge/Executive Harold Stilts wanted to clarify that these issues were prior to his administration and Fancher stated, “All the issues that we’ve got, that’s causing the problem, is from the prior administration.”

“Back in 1993 I believe it was, a dollar on the phone lines, landlines, now landlines are decreasing…those funding sources are going away and we’re having to find a new source to take care of our 911 system,” explained Stilts.

Fancher has researched what other counties are doing and some are adding a specific amount to either the water bill, electric bill, or tax bill. For example, Campbell County added a charge for every residence.

“The dollar on the phone bill has worked excellent for us. We’ve been very frugal with the money. We’ve been able to do a lot with that,” noted Fancher adding, “We’re the only county in the state that has never raised that rate that I’m aware of.”

Stilts stated that he has already checked with Farmers RECC and was told “we’re not gonna do it” and was advised that they would file a lawsuit if the county tried to add a 911 fee to the electric bills.

Some other options are to add a fee to the water bill or property taxes. “We’re gonna have to do something,” noted Stilts and advised the magistrates to think about options before the next meeting. A proposal is needed before the next 911 Governing Board meeting in July. 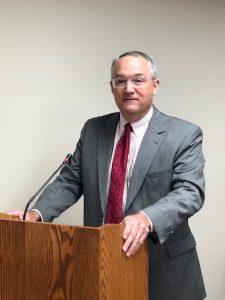 Rich Alexander, attorney for Chad Pennington and Pennington Stave & Cooperage presented another appeal to the court for the TVA monies. “This project at the Industrial Park is just a tremendous opportunity for Edmonton and for Metcalfe County. The bourbon industry is booming in Kentucky.”

“We’ve got a project that has the potential to employ up to 150 jobs for citizens in Metcalfe and surrounding counties so why not use all available money and all efforts and all hands on deck to make this business thrive?”

County Attorney Barry Gilley replied, “There is nothing from this fiscal court that has promised them their IDA money…from a legal point of view, the IDA monies are for inducements. This deals done…I’m not sure we can do that…the contract to do the project with us is done. It’s over. It’s not an inducement anymore.”

Gilley and Alexander agreed to meet and bring each other up to speed on contracts, etc. that were previously signed. Gilley emphasized that he wants to be sure and give the proper advice to the fiscal court members.

Bids were opened for the FY 2022-23 Annual Supplies with the following being awarded. Rock hauling was awarded to Mark Rock, chip seal to Gaddy Shamrock, asphalt and blacktop to Scotty’s Contracting, crushed stone to Burton Stone, road oil to Hud Material and Asphalt Material (both), and fuel oil to Thomas Oil & Fuel (previously Big Meadow Oil).

The court approved the first reading of Budget Amendment #4 to include unbudgeted receipts into the FY 2021-22 budget. Also approved were inter-fund transfers and claims.

The court recognized Gilbert Mitchell from Senator Mitch McConnell’s office was in attendance for the first time.

The next regular meeting is scheduled for Tuesday, June 28th at 9 a.m. 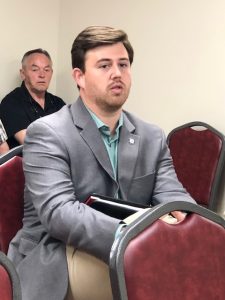 Gilbert Mitchell from Senator Mitch McConnell’s office decided to sit in on the fiscal court meeting. Photo by PJ Martin