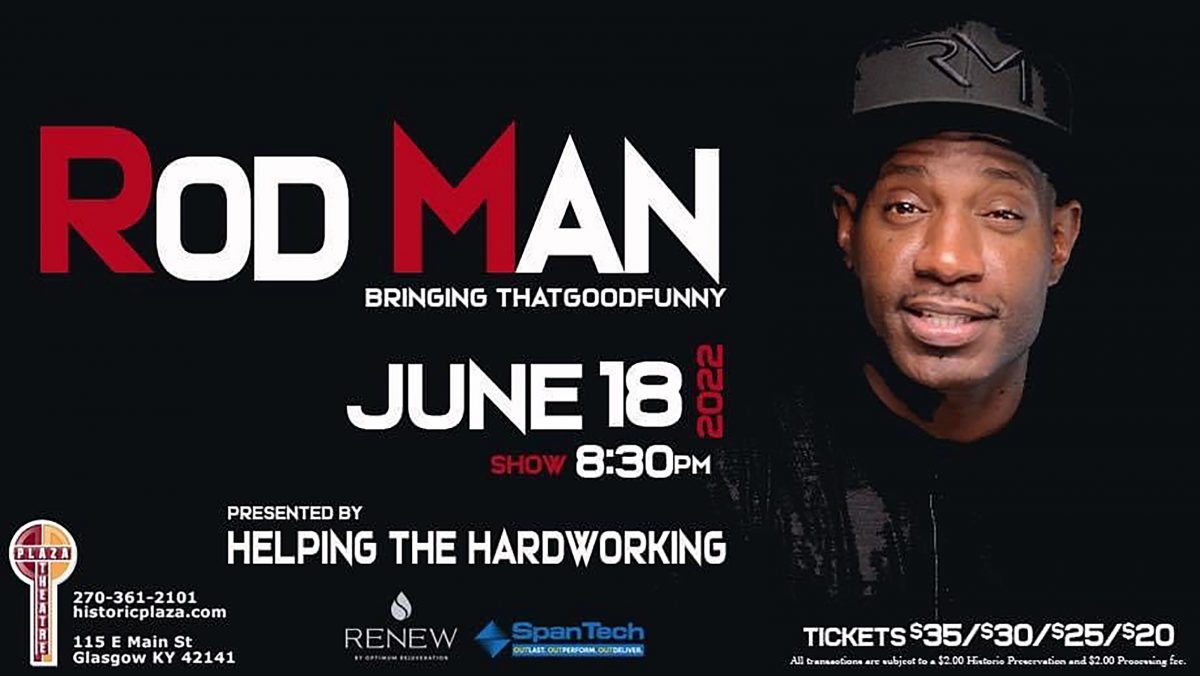 Mark your calendars. A night of fun and laughter is soon coming to the area.

Comedian Rod Man, the winner of Last Comic Standing Season 8, will be taking the stage at the historic Plaza Theatre in Glasgow on Saturday, June 18 at 8:30 p.m. CT.

Rod Man is an award-winning entertainer. Not only has he graced the stage at places like The Apollo Theater and Caesar’s Palace with his comedic talents, but he also hosts his own YouTube shows: Time Out with Rod Man and That Good Funny.

Rod Man is also an actor and writer, known for his roles in Funny People (2009) with Adam Sandler and Seth Rogen, The Chocolate Sundaes Comedy Show (2013), and The Big Black Comedy Show, Vol. 2 (2005). His television appearances include “The Bad Boys of Comedy” for HBO, Nick Cannon’s “Wild ‘N Out” for MTV, and Martin Lawrence’s “First Amendment” for Starz.

Rod Man’s “Bringing That Good Funny” comedy show in Glasgow is presented by Helping the Hardworking LLC. Tickets range from $20-$35. All proceeds from the event will go to the eight Volunteer Fire Departments (VFD) in Barren County.

Helping the Hardworking is a non-profit which was established in 2019 as an opportunity to give back to hard working individuals within the community. Board members are Jamie Bewley Byrd, Karol Ann Sharp, and Kassie Celsor.

“As a business owner, I support all individuals who work hard to provide for their families and make the opportunities and services in our area happen,” said Byrd, who also serves as President for Helping the Hardworking LLC. “…As President I work to make sure that we offer events and services in ways that allow us to also give back to organizations and hard working individuals.”

Byrd explained that the VFDs were chosen as recipients of the comedy show’s proceeds because they are a critical part of the county and the safety of its residents.

“They volunteer their time, and they drive their own vehicles that have to have gas and service in order to make the runs to assist us in our critical needs,” Byrd said. “We chose that group to receive a donation to help those individuals with their expenses that costs them, in addition to their volunteered time.”

Byrd also hopes the comedy show will be beneficial to Glasgow overall by attracting people into the area, allowing them to also dine and shop locally.