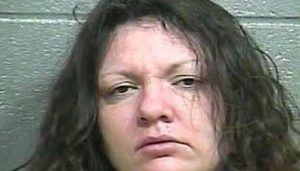 Alice Stier, 36, of Greenwood, Indiana was arrested in Glasgow and charged with stealing a vehicle and a gun.

An Indiana woman has been arrested by members of the Glasgow Police Department after they discovered the vehicle she was driving was stolen.

The theft was discovered when the Glasgow Police Department responded to the Extreme Fitness Center in reference to a complaint. Stier was located, and officers confirmed the vehicle was stolen from a business on West Front Street.

Officers also confirmed that a handgun that was inside the vehicle had been stolen.

Stier is in the Barren County Detention Center.