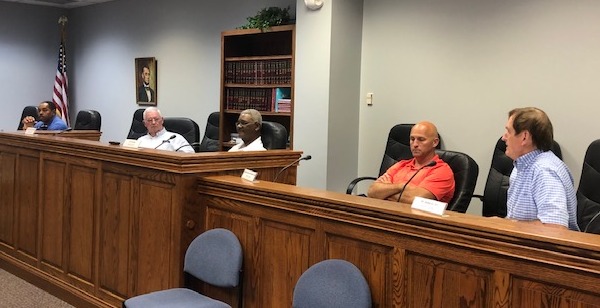 The Barren-Metcalfe Emergency Medical Services Board of Directors met in its regular session on Wednesday, May 25th in the Barren County fiscal courtroom. All were present except Neil Thornberry who was out of state.

The majority of the meeting centered on TJ Samson’s possible increased partner contribution. TJ Samson Representative Ervin Sorrell informed, “the board is willing to go to the 25%. But going to that 25% we would like caveat that we wouldn’t be asked for an increase within the next 5 years.”

Director Jackie Brown questioned the 5-years and suggested 3-years. He asked the Service Directors, “Do you all have any reports or any information that you could provide us board members as to how TJ is benefiting? We know how they are contributing, but how are they benefiting through having this relationship with the ambulance service?”

Also noted were that 5.7% of those were picked up at a TJ location and delivered to another TJ location which would cause a slight discrepancy in the numbers.

Currently, TJ Samson’s contribution is 20%, and to increase this would require two readings and votes. It was noted by Attorney Brian Pack that if an increase is made, a change would need to be made to the bylaws accordingly and the budget could be amended.

The board discussed the 5-year hold and suggested a 3-year instead be taken back to the TJ board for debate. To further examine the subject, a special meeting is scheduled for June 1 at noon.

Next, after discussing the main budget increase, the board voted to accept the proposed 2022-2023 budget (calculated using the current contribution percentages).

Financial Officer Shawn Estes presented the April report, “911 billings were up 3.8% …year-to-date collections were up 18.5% for April.”

The total year to date billings and collections totals by station:

Assistant Director Garland Gillian updated the board on the stats of operation. YTD runs are up by 67 over last year with a total of 927.

The vehicle maintenance costs were increased in April due to an engine replacement in ambulance 509. The cost was shared by the Ford Motor Company which left the ambulance service a cost of $1,692.28 of the quoted $16,000.

Gillian also noted that the addition of the ‘moose bumpers’ to some of the ambulances has resulted in less front tire wear.

He added that the annual state inspection is scheduled for Thursday, May 26th.

Next, Executive Director Joe Middleton stated that one of the trainees had earned their Paramedic license and 5 others were in the process of paramedic training.

No new business was discussed.

The next meeting is scheduled for June 22, 2022, at 4 p.m. at the Barren County fiscal courtroom.