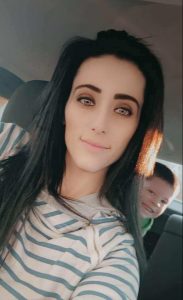 On May 11, The Gimlet/Edmonson News first reported on the story of Sarah Harrison and the questionable ethics involved in her arrest and the lost custody of her autistic son. The following information is a compilation of stories that previously ran in our newspaper.

Mother continues to fight for return of autistic son

To have a child taken away is every mother’s worst nightmare.

And for the past month, that nightmare has become a reality for Sarah Harrison.

On the night of April 7, 2022, Harrison was driving along KY-259 through Brownsville. With Harrison was her nonverbal, autistic son, Jameson, who was secured in a car seat in the backseat of Harrison’s car. The young mother was continuing to move items from her former home in Leitchfield to her new home in Tennessee, and KY-259 was the most efficient route for her to travel.

That night, however, Harrison and her son both experienced a life-altering moment.

“It was about 10 o’clock at night. He (Jameson) had just fallen asleep,” Harrison said. “…I was really, really tired, and my son is disabled. He’s autistic.”

Harrison had pulled over on the side of the road when an officer had pulled up behind her car. The officer approached Harrison’s vehicle and asked for her identification.

According to Harrison, Jones stated that he had received a call that she had been seen driving erratically.

“I give it (my ID) to him, and then another officer pulled up behind him in like two minutes and goes to the opposite side and shines a light in my car,” Harrison said. “The other officer (Jones) asked me to step out of the vehicle. He asked if they could check my car, and I was like, ‘Sure. I have nothing to hide.’ He starts going through my stuff…He was like, ‘You’ve got prescriptions for everything.’ And I was like, ‘They’re prescriptions, but they’re all prescribed. There’s nothing illegal. There’s no drugs, no alcohol. There’s nothing in my system.’”

Worried and concerned, Harrison stated that she repeatedly told Jones that her child was disabled and that he was sleeping.

Harrison explained that she was forced to the ground by Jones, all the while telling the officer that he was hurting her and begging him to leave her son alone because he was disabled.

“I told them, ‘Don’t ruin my kid’s life. He’s disabled. Don’t ruin his life. What are you doing?’” Harrison said. “…He wouldn’t let me call anybody to come get my kid.” 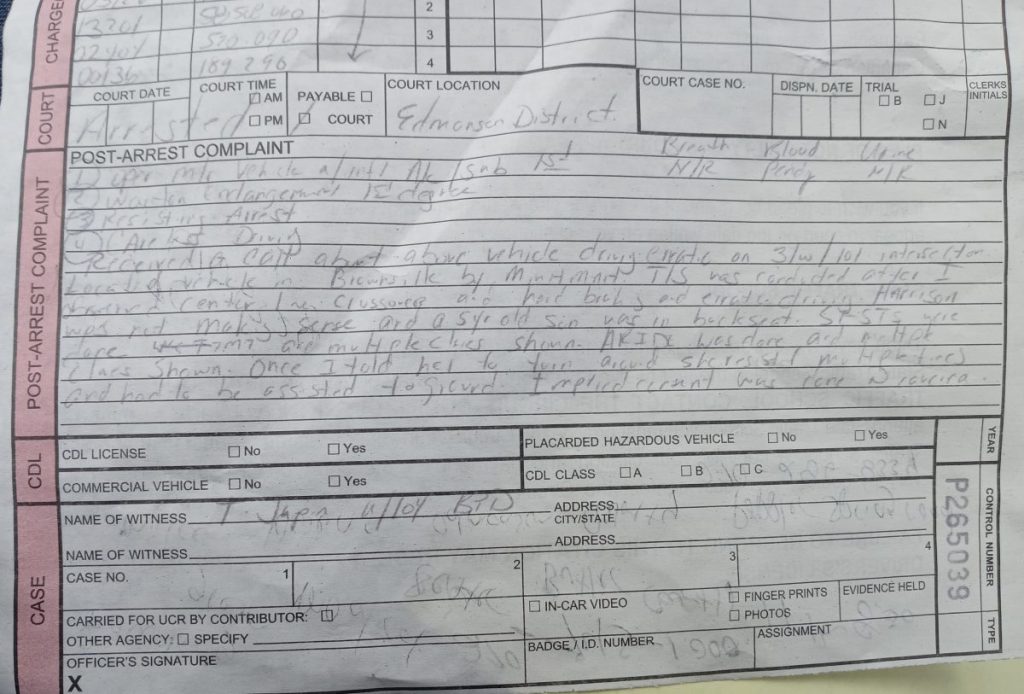 A copy of the citation from Harrison’s arrest. Photo submitted.

According to the citation, Harrison was arrested for operating a motor vehicle while under the influence of drugs and/or alcohol (DUI), wanton endangerment (1st degree), resisting arrest, and careless driving.

As a result, Harrison’s son Jameson, who is autistic and nonverbal, was taken into custody by the Cabinet for Health and Family Services.

Attorney Gary Logsdon, of Gary Logsdon and Associates in Brownsville, is representing Harrison.

“Ms. Harrison reacted to the police stop properly,” Logsdon said. “Then she was accosted by the police officer (Jones), and he thought because of her behavior, which is normal for a person with her conditions, he thought she was under the influence of drugs. He takes her out of the vehicle and arrests her on a DUI and a wanton endangerment first, which is a felony, because a child is in the car, and careless driving and resisting arrest because she resisted him (Jones) taking her away from her son and taking her son away from her because the son, Jameson, had never been separated from his mother. She is the only person with whom he can communicate, and that’s by sign (language) and by habit. He is nonverbal.”

Logsdon went on to explain that the “conditions” of which he spoke of that Harrison has included ADHD, for which she receives prescription medication.

Logsdon also stated that nothing illegal was found in Harrison’s car. Furthermore, in addition to Harrison passing the breathalyzer test, she also submitted to a hair follicle test. This test determines if the hair sample is negative for drug use. A negative result indicates that a person has not engaged in illicit drug use over the past 90 days. Harrison’s test proved that she was negative for all illicit drugs. Harrison also submitted to a blood test which, as of May 3, was still pending with the Kentucky State Police. 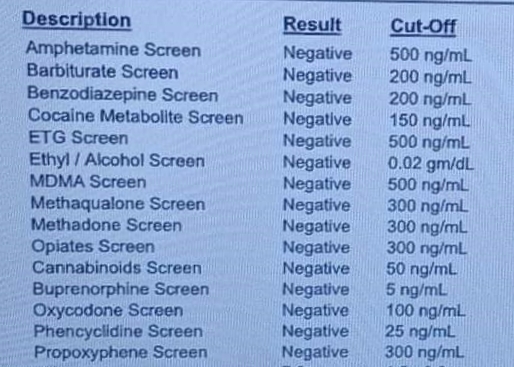 Sarah Harrison underwent a hair follicle test. The results came back that Harrison was negative for illicit drugs within the past 90 days. Photo submitted.

“I was successful in obtaining a dismissal of the wanton endangerment charge, which is a felony, and a dismissal of the DUI charge, driving while under the influence of drugs,” Logsdon said. “Those were dismissed…The careless driving and the resisting arrest are still pending, and they are on for the Court’s Docket May 24, 2022 at 8:30 a.m. Those are minor misdemeanors, very minor.”

And that, Logsdon said, is where the true travesty lies: that Jameson, a nonverbal, autistic, five-year-old child, has still not been given back to the custody of his mother. He has been placed in three different foster homes within the past 30 days.

“We expected that the child would be returned to his mother as soon as those (DUI and wanton endangerment charges) were dismissed, but for some reason that was not in the cards. It didn’t happen,” Logsdon said. “…This is a child who is nonverbal, communicates only with his mother, is in intense therapy and medical treatment for his nonverbal autism, and he has never been separated from his mother. Now he has been separated from his mother since April 7. It’s a travesty, an unjust travesty, that was initiated by a police officer (Jones) who did not, who is not, properly trained to recognize what he was dealing with, and a system that fails those who are disabled more times than it helps them.”

Assistant County Attorney Richard Jackson was contacted regarding Harrison and her son’s case. However, because the case involves a juvenile, Jackson stated that all information remained confidential.

“I deal with the juvenile court, the family court, so I’m not allowed to comment or either confirm or deny anything,” Jackson said.

According to Logsdon, the family court judge has scheduled a hearing for May 11 in Edmonson County.

Since April 7, Harrison has only seen her son twice in supervised visitations. She stated that on one particular visit when the weather was colder, her son was dressed in shorts and a t-shirt while the, “…state workers were in long sleeves and pants.”

Harrison is concerned about her son’s health and safety.

“When I saw him last time, he wasn’t alert or aware of his surroundings,” Harrison said of her son. “…He was dehydrated, his lips were cracked, he wasn’t able to look at me and respond to sign language…He did respond to the sound of my voice, and he did know not to let go of my hand. He was very scared whenever I was leaving, like this frantic look on his face…He looks like he has lost weight. He has bags under his eyes…They had him in diapers, and he was fully potty trained when they took him…He should not be in diapers.”

“They’re going to damage him,” Harrison continued. “This is going to be traumatizing to him. I’ve taught him how to do all of these things, like how to go potty in the potty, how to make his bed, how to brush his teeth, and they’ve taken him away from his mother. He’s going to forget how to do those things. It’s going to negatively affect his life.”

“Can you imagine what must be going on in this little child’s mind?” Logsdon said. “The victim here is this child who has never been away from his mother, and he can’t speak, he can’t make his needs known. He has got to be going through the horrors of all horrors.”

Logsdon, who has been practicing law for nearly 49 years, has never seen a case like Harrison’s.

“It’s a bad, bad situation. Terrible,” Logsdon said. “…I can say that it is quite odd that someone hasn’t intervened to assist this child and his mother in putting them back together and trying to start the healing process for the damage that’s been done by the official process which has acted here, shall we say, without real intelligence.”

The Edmonson County Sheriff’s Department was contacted regarding Harrison’s case. Neither Sheriff Shane Doyle nor Deputy Jordan Jones were available to speak. As of press time, Doyle and Jones had not returned The Gimlet’s call. 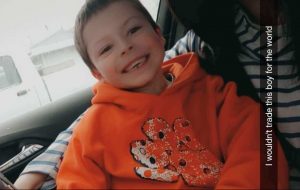 Jameson, son of Sarah Harrison, is nonverbal and autistic. He has been away from his mother since April 7 and has been placed in three different foster homes. Photo submitted.

The Gimlet (Edmonson News) reported a story regarding Sarah Harrison and her nonverbal autistic son, Jameson.

On the night of April 7 while traveling through Brownsville, Harrison was arrested by Edmonson County Sheriff Deputy Jordan Jones for operating a motor vehicle while under the influence of drugs and/or alcohol (DUI), wanton endangerment (1st degree), resisting arrest, and careless driving.

Harrison’s son, who was with her at the time, was taken into custody and placed in foster care.

However, on the night of her arrest, Harrison had passed a breathalyzer test. She later also passed a hair follicle test. This test proved that Harrison was negative for all illicit drugs and had not engaged in illicit drug use over the past 90 days. Because of this, two of the four charges against Harrison – the DUI and the wanton endangerment charges – were dropped.

Even so, Harrison has still not regained custody of her son, Jameson, who has been placed in three different foster homes since April 7. Jameson is autistic and nonverbal, relying on his mother for care, as well as for communication through sign language.

“There was supposed to be a motion to dismiss hearing yesterday (May 11),” Harrison said. “This is the second time it has been rescheduled. The judge said there has to be a two-hour hearing on May 20…He said they are waiting on the Commonwealth of Kentucky.”

The Gimlet/Edmonson News will provide an update in our June 1st newspaper regarding this case. We will continue to provide updates as additional information is received.

Reporter’s Note: These cases are tough and difficult to write about as we only have one side of the story. Consequently, we can’t know the other side of the story because of confidentiality reasons. 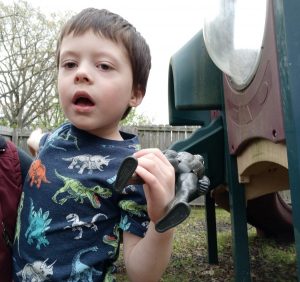 During a supervised visitation. Sarah Harrison said she was concerned about her child’s safety and health. Photo submitted. 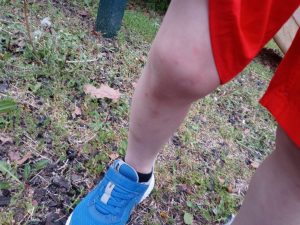