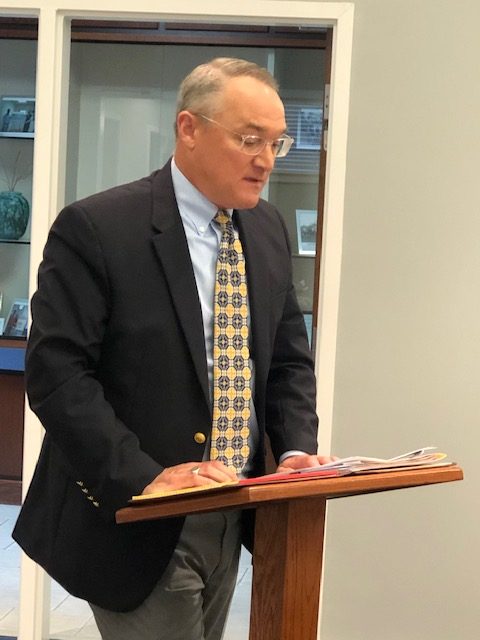 Rich Alexander, attorney for Chad Pennington and the stave mill read crucial sections of the agreement for clarification. Photo by PJ Martin

When the Edmonton/Metcalfe Industrial Development Authority (IDA) met on May 16th the biggest item on the agenda was the South Industrial Park, specifically Chad Pennington and the agreement for the Stave Mill.

The issue at hand is the cost overrun for the project. According to the IDA’s March 21, 2022, meeting minutes, the overrun amount is at least $429,000. In the original agreement in 2018, any overage amount was to be paid by the IDA using TVA monies. However, due to legislation in 2021, those TVA monies are now dispersed to the county government for use in economic development.

This leaves the IDA board with no TVA RDAAP money to pay the overrun amount unless the Judge/Executive and fiscal court members agree to transfer the funds to the board. This fact led to a heated debate among IDA members as to who the rightful recipient of the funds should be.

According to the minutes of the April 26, 2022, Metcalfe County Fiscal Court meeting, Judge/Executive Harold Stilts noted that he had contacted someone in Frankfort and they informed him of the amount of the RDAAP funds sitting in the account for Metcalfe County for future commercial real estate project purchase(s).

Judge Stilts, who was in attendance at the IDA meeting stated that the RDAAP funds have already been put on hold in Frankfort for two future county projects. The purchase of land for industrial use and the enlargement of a building.

It should be noted that the fiscal court can, at any time, approve a Resolution and submit detailed plans for usage to the DLG for approval or denial. The funds can only be used for economic development.

In the original IDA board agreement from the May 4, 2018 meeting minutes it states:

After discussion regarding the spec building, Eric Eskridge made a motion to offer Chad Pennington a proposal selling the 30,000 sq. ft. building and seven acres in the South Industrial Park for $900,000 for construction of a stave mill and cooperage; after this initial purchase, the IDA will then build a 90,000 sq. ft. building and finance same for ten years with the new building to be placed on the remaining 31 acres at no additional cost at the end of the finance term and to pursue additional funding from TVA and any other incentives to support this project. A second motion was made by Rick Hope. All board members were in favor, with Doug Smith abstaining from the vote.

Again this is stated in the IDA’s letter to Chad Pennington dated May 7, 2018.

The Industrial Development Authority will pursue Tennessee Valley Authority monies and other incentives to support this project.

Jolly presented copies of emails concerning the HB382 legislation to the board members explaining the position the board is in. In argument, Jolly stated, “I believe as the board we have indeed did exactly what we said we were going to do up until the time lease/buy was executed. The lease/buy agreement references nothing about future RDAAP funds being applied to this project.”

Attorney Rich Alexander lawyer for Mr. Pennington and the Stave Mill pointed out that the IDA needs to uphold its part of the agreement. “Now we have a lease/buy agreement that says very simply, that any cost overrun, (it’s not our fault, it’s not your fault…) would be added into the lease/buy saying that we would then refund those, add those to the 15-year lease.”

Expected overruns: As referenced above, it is anticipated that there will be cost overruns over and $1,616,900 (the CDBG and ARC funding) incurred by IDA in order to “fit up” the building to Lessee’s requirements. Those cost overruns over and above the $1,616,900 CDBG and ARC funding shall be added to the $550,000 and an updated amortization schedule will be provided which will include any building upgrade overrun cost which the Lessee will be responsible for that were paid in advance by the Lessor. The Lessee building/land monthly payment will increase if additional overrun cost is expended by Lessor.

After more discussion, the board approved a resolution for IDA Chairman Wes Jolly to attend the next Fiscal Court meeting and request the TVA RDAAP funds for the fiscal years 2021, 2022, and 2023 (totaling $462,820) be given to the IDA board for use in paying the overrun cost.

Keep reading the Edmonton Herald-News for updates on this story and more.