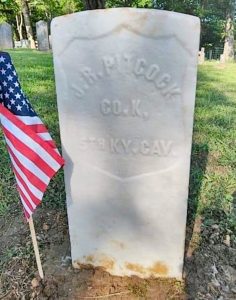 Julia Evans was the Tompkinsville postmistress in the 1880s when a Civil War veteran’s headstone arrived in the mail. No one ever claimed the marker and she was unsure where it belonged. Eventually, she took the headstone home with her in hopes of finding its rightful owner. Time passed on, and so did she, but the marker remained unclaimed. Fast forward 134 years and Mrs. Evans’ great-grandson Joe Moody contacted Chad Comer, who had set numerous military headstones in the area, to attempt to find out where the monument belonged.

The government-issued headstone reads “J.R. Pitcock, Co. K, 5th KY CAV.” with raised letters in a recessed shield and is made of Vermont marble. It was created on August 21, 1888, by Sheldon & Sons of West Rutland, Vermont, and shipped to Tompkinsville, Kentucky. Chad determined this to be James R. Pitcock, who is buried in the Old Mount Hermon Cemetery near Tompkinsville. With the help of Scott Fife, James’ Civil War records and widow’s pension were obtained along with confirmation of the production of the marker.

James R. Pitcock was born on March 8, 1842, the son of Laban Pitcock and Elizabeth Chapman Pitcock. He and his father Laban both enlisted in the Union Army in October of 1861. At their time of enlistment, he was 19 and his father was 52 years old. They were both mustered as privates in Company K of the 5th Kentucky Cavalry on March 31, 1862, at Gallatin, Tennessee for a period of three years. He later re-enlisted and was transferred to Company L of the 3rd Kentucky Cavalry. After the Civil War, he married Susan Frances Garmon and they had two daughters Mary and Nancy. He died on July 1, 1869, at the young age of 27.

After locating some of his descendants, and seeing that his current headstone was in poor condition, his family wanted the military headstone to finally be set in its rightful place. On May 7, 2022, almost 153 years after his death, a deserving veteran’s grave was finally marked with a military marker, and a shipment seeking its destination for 134 years was finally delivered. In the photograph of the newly erected (134-year-old) marker are Chad Comer (who, along with his son John Morgan Comer, cleaned and set the headstone), Max, Ned, and Joe Moody (great-grandsons of Postmistress Evans who saved the marker) and Charlotte Petett Arnett (great-great-granddaughter of James R. Pitcock).

We owe our freedom to America’s veterans. 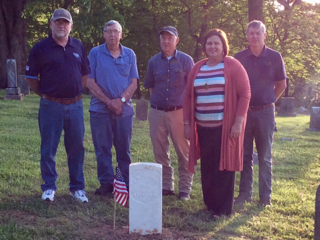