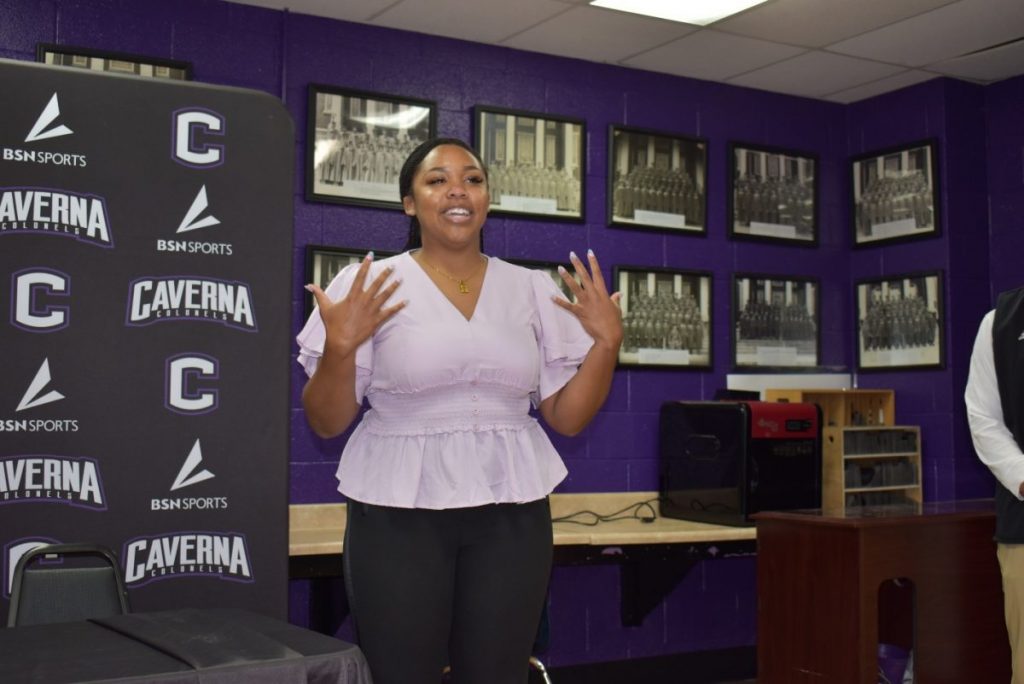 Caverna High School is a small school where everyone knows everyone, and sports are a big part of that family-friendly atmosphere. It’s all about family. In keeping with that tradition, Caverna High School named one of their own as the new girls’ basketball coach last week in a special press conference held in the school’s library on Friday.

Madison will be filling some big shoes. She will replace her father as the Lady Colonels Coach.

Coach Cornelius Faulkner stepped back into the role as girls’ basketball coach for another stint beginning in 2017-2018. Faulkner had served in that position before beginning in 2007/2008 and resumed that role when Tacarra Barnes stepped aside. Barnes became head coach in 2015.

The Faulkner family is well-known for their athletic prowess. All three Faulkner children (Mason, Madison, and McKeeya) were star hoop players for Caverna. Mason just completed his senior year at the University of Louisville where he started or played valuable minutes the entire season. Mason played at three different colleges during his 5-year collegiate career and was an impact player at all the schools he attended. He finished his collegiate career with 1,487 points and 515 assists.

McKeeya was also an outstanding basketball player at Caverna. She also attends UofL.

Madison, her twin brother, Mason, and McKeeya are the children of Cornelius and Meredith Faulkner. They are a tight knit family that enjoys sports but also places a high value on their faith and contributing to their community.

As a player, Faulkner led the Lady Tigers in rebounding average in her sophomore (4.6 rpg), junior (6.1 rpg), and senior (5.8 rpg) seasons while also being the team’s leading point scorer as a junior (13.0 ppg) and senior (17.5 ppg). She finished her career boasting three All-Conference selections, NAIA All-American First team, and Honorable Mention selections, and was also the back-to-back NCCAA Player of the Year in 2018-19 and 2019-20.

Madison and Mason are two of the top leading scorers in Cavern’s history. Madison Faulkner’s basketball experience started when she was just in the 6th grade, so she will be able to understand and relate to the many young players that are a part of the CHS girls’ basketball program. The team surrounded her after the press conference ended as she took time to introduce herself to those that were able to attend the event.

“We’ve been searching for a girls basketball coach for about a month now and we have interviewed several candidates,” CHS Principal Chris Crain said to open the press conference. “We are proud to announce that, Madison Faulkner, is our new girls’ basketball coach.”

“I’m really excited to get started with you all,” began Coach Faulkner as she addressed the players gathered in the seats in front of her after she was announced as the new coach. “I see a lot of potential in this group. I want to encourage you to tell any of your friends in the school that would like to play basketball that I would love for them to come out and be a part of our team.”

“I’ve seen these kids grow up,” answered Faulkner when asked what excited her about coming back to the high school where she graduated and had so much success as a player. “I am excited about being able to come back here and share some of what I learned about a game I love and, a game I am passionate about with these players that I’ve watched since they were in elementary school.”

“I wanted to come back and be a light in this community in any way I can,” she added. “That means the world to me.”

“Basketball is just a passageway to life,” Faulkner replied when asked what important things she would share from her high school and collegiate career with her players. “I feel my dad coaching me in high school, instilled in me a desire to have a competitive spirit…to be a tough competitor on the court and in life.”

Faulkner explained that having that “competitive spirit” could be just as important when you are competing for a college scholarship or a job or in many other aspects of life in addition to having that drive on the basketball court.  “Being competitive can go a long way in helping you in anything you want to accomplish in your life,” she added.

“I also want to teach and show them just how far strong, high character can take you,” Faulkner said. “My college coach helped instill in me the importance of valuing those around you, in basketball and in life. If you are a great person and you care about those around you, you will go far.”

“I believe in a high-intensity game,” Faulkner said smiling when asked about her basketball philosophy and if she likes to ‘push the basketball, play up-tempo.’ “I think high school basketball has slowed down tremendously, and I don’t believe in that. I feel we need to get after people.”

“So, with these two leaders (she said pointing to two of her seniors for next season, Kaliana Richardson and Tavi Gonzalez), we can accomplish great things,” Faulkner concluded. “We are going to put the team on their backs, and they will lead us far I believe next season. I believe in getting after it…and just setting the tone and not let the other team dictate what we do but do what we do best when we can play fast.” 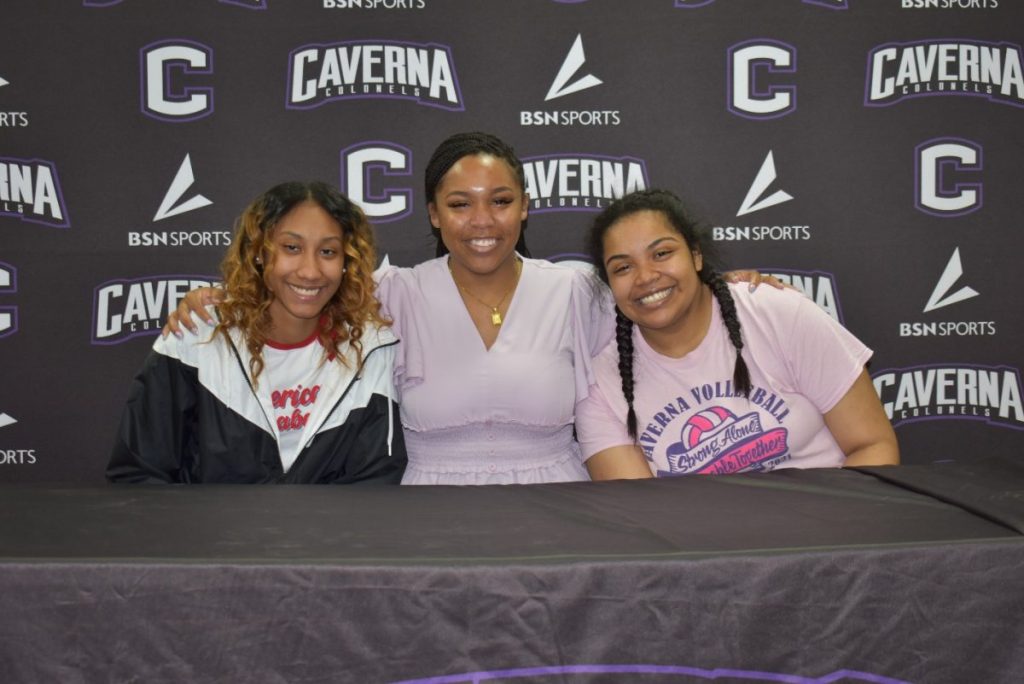 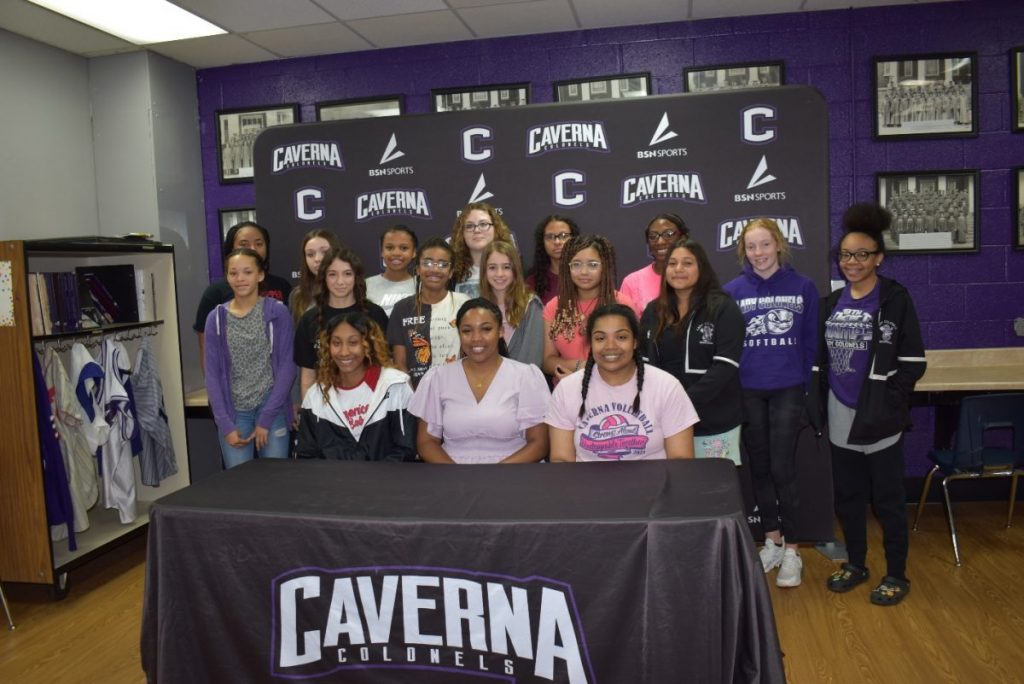 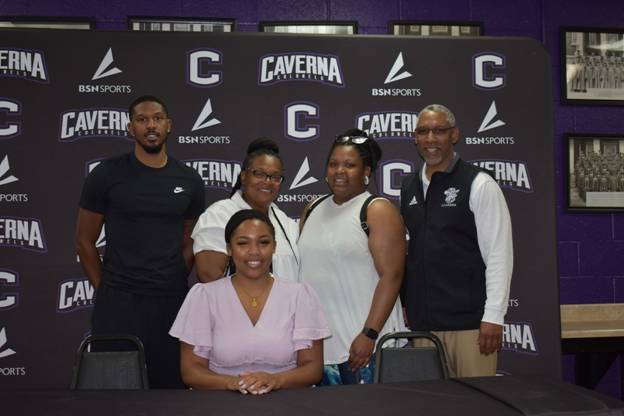