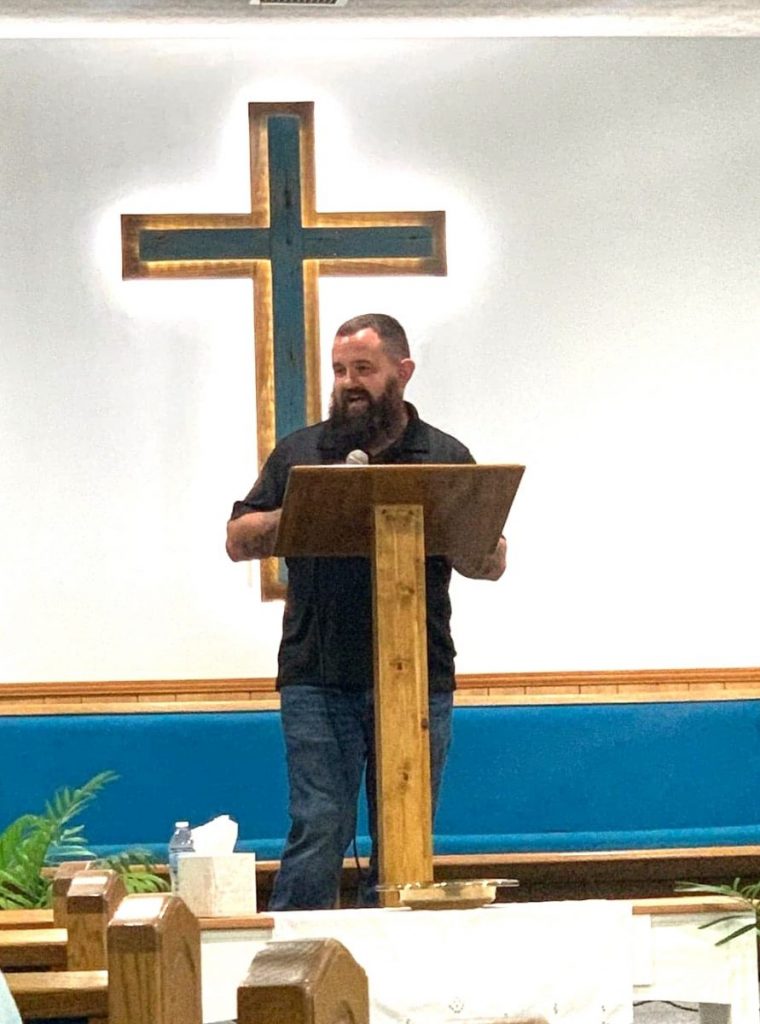 Jeremiah Meredith has been sober for over two years. He often shares his testimony of how his life changed once he developed a personal relationship with the Lord. Photo submitted.

Jeremiah is a Hebrew name meaning “appointed by God” and “God will lift up”.

For Cub Run native Jeremiah Meredith, there is perhaps no better meaning of a name than this to describe his journey from addiction to sobriety.

When Jeremiah graduated from high school, he found himself traveling down a dark road.

“I was like 17 or 18-years-old, and I got into drugs and alcohol,” Jeremiah said. “It started out just kind of it was the cool thing to do and partying all the time, and it turned into something that I had to have all the time.”

Drugs and alcohol led Jeremiah down a 20-year road of addiction.

“…I was living a double life,” Jeremiah said. “You know, I had a family. I took my family to church. I worked a job, but behind the scenes, I was a full-blown drug addict…I was addicted to something I couldn’t get off of.”

Jeremiah’s family knew all too well the effects of his addiction.

“I was never there for things. You know, I wasn’t there like a father should be or a husband should be,” he said. “…I look through numerous photos of things that happen in the past, and I don’t even remember being there. I see pictures of me being there, but I don’t remember it…There would be numerous nights where I would not even be home with my family…I guess it was more they had their own life. I had mine.”

Despite his drug and alcohol abuse, however, there were many people who were willing to help Jeremiah through his struggle.

But after two decades of darkness, sobriety finally came for Jeremiah.

“When I reached out for help, someone introduced me to a (addiction recovery) group that was meeting at a church,” he said. “That is when my life really started to change because that’s when I developed a personal relationship with God, and then I really seen my life turn around.”

God met Jeremiah right where he was, lifting him up and appointing him for a greater purpose.

“I got saved and baptized when I was 12-years-old, and I just veered off. I veered off path, and I knew, all those years I knew what I was doing was wrong,” Jeremiah said. “And there were times where I would think about quitting, but I couldn’t. I just couldn’t. There would be days I had visits from the preacher of our church. I had numerous people praying for me, but I just never could put the drugs down. And I guess when my life really turned around was when I developed a personal relationship with Him. I knew that, that I couldn’t, but He could, and I was gonna let Him.”

Jeremiah has been sober for two-and-a-half years. He and his family now reside in Hardyville, and he works as a dozer driver for a logging company.

Jeremiah’s family never gave up on him, and his church family has also been by his side. He stated that he now has a life which he once only dreamed of having.

To give back to his community and help others who are battling addiction, Jeremiah leads a weekly substance abuse recovery meeting. Meetings are held every Tuesday at 7 p.m. at the old fellowship hall at Rowlett’s Baptist Church.

“It’s a program that teaches you that the power doesn’t lie in us to fix ourselves,” Jeremiah explained of the meetings. “It comes from a power greater than us and that power being God.”

The meetings have grown substantially, beginning with five to ten people and now having 30 individuals consistently attend the weekly meeting. According to Jeremiah, the meetings allow everyone a chance to sit down with others and share their stories.

“It (the meeting) just shows you that you’re not the only one because, most people that are suffering from drug addiction or alcoholism, a lot of times they do feel alone, and they do feel their life is worst than anybody else,” Jeremiah said. “But these meetings teach you that it’s not that way at all, that there are numerous people out there that is looking for the same help that you are.”

Jeremiah encourages others who are battling addiction to never give up and never stop praying.

“I prayed for years and years just for the Lord to deliver me from this drug addiction, and there for a long time I never thought that day would come,” Jeremiah said. “But now here I am, and it’s two-and-a-half years later and I haven’t had a drug or a drink.”

For those who have a loved one battling addiction, Jeremiah explained that it’s about providing love and support.

“Most people that are on drugs and alcohol, there’s always a point where they don’t wanna be on them, they don’t wanna be doing those things anymore, but they can’t get away,” Jeremiah said. “It’s not that they can’t help themselves. It’s that they don’t know how to help themselves, and one thing that I would tell anybody that has a loved one that’s suffering from drug addiction or whatever, never stop praying for them. Pray for them and always love them no matter what.”

Because of his dedication to helping others through their struggles, Jeremiah has been selected as the Hart County News-Herald’s Hometown Hero for the month of May.

Jeremiah was nominated by his wife, April.

“He (Jeremiah) is currently 2 1/2 years drug and alcohol-free,” April wrote in her nomination email. “We attend Rowlett’s Baptist Church where he leads a ministry on Tuesday nights…He is very passionate about helping others get back on their feet and on the right path.”

Scott Coats, Pastor of Rowlett’s Baptist Church, spoke of Jeremiah’s commitment to both his faith and recovery.

“When it comes to a testimony of the power of Jesus to deliver and set free, Jeremiah Meredith’s is one of a kind,” Scott said. “He will be the first one to tell you that it was only by trusting in the good Lord above that brought him out of a life of addiction. We are so proud to call Jeremiah one of our own at Rowlett’s, and after seeing the change that the Lord made in Jeremiah when he came to the church leadership with a desire to help others who struggled with the same issues, it was a no-brainer!”

“When Jesus does a magnificent work in your life you want to share it, and you want to help others any way you can,” Scott continued. “Beloved, let us love one another, for love is of God; and everyone who loves is born of God and knows God.’ I John 4:7 NKJV. Jeremiah is simply giving back to this community in a way that is much needed after the Lord has given him so much. At the end of the day, it’s not about have we been knocked down. It’s about did we get back up! Jeremiah Meredith gets back up and helps everyone he can in the process.”

With humbleness in his heart, Jeremiah said he was thankful to be nominated as a Hometown Hero but ultimately recognized the many others who have been heroes to him along the way.

“There’s been all kinds of heroes in my life because when I reached out for help I could name off numerous people that helped me,” Jeremiah said. “There’s lots of people in our community that’s there to help…All through sobriety, I’ve been overwhelmed with the love that I’ve been shown from other people, but my relationship with God is something that I always want to point out. So, I guess the main hero in anybody’s addiction and recovery story from drug and alcohol addiction, the true hero is Jesus.”

“I love sharing my testimony. I’ve shared my testimony at other churches,” Jeremiah added. “I’ve shared it with lots of other people that are going through rough times with addiction or alcoholism, and I love sharing my story. I hope that people seeing me now and knowing where I came from, I hope that they can see a little bit of light at the end of the tunnel just by hearing what the Lord’s done in my life and knowing He can do the same thing in their life.”

On behalf of Jobe Publishing, Inc., the Hart County News-Herald is honored to recognize Jeremiah Meredith as this month’s Hometown Hero. 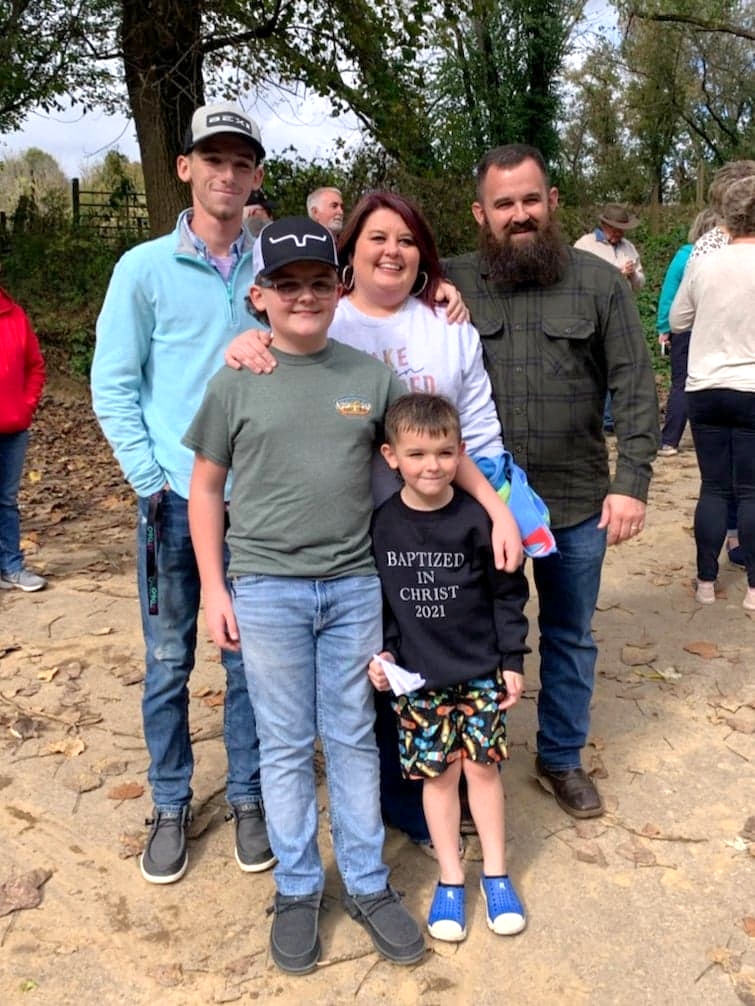