Since September 10, 2019, County Judge Executive Michael Hale has continually said that the “Kentucky Department of Agriculture told them to remove the horses, immediately, right then, that day.” He repeated this as recently as May 2, 2022.  (All meetings are posted online for personal viewing).

On May 10th, I texted Judge Hale and asked him to provide more details on their request.  At this point, Hale reversed course, relinquishing the removal of the horses from the Kentucky Department of Agriculture and placed it solely on Barren County Animal Control.

“The department of agriculture, yes, Marcus Avery was there, but that request to remove came from Animal Control.”

Legal Counselor Nicole T. Liberto of the Kentucky Department of Agriculture stated that Marcus Avery arrived after BC Animal Control and that he did not complete any reports, take any photos or video.

Liberto reported that Avery advised animal control that they needed to get a court order and he departed the scene.  “He was never officially involved and KDA has no statutory authority to authorize or suggest the removal of the horses.”

It is cause for serious alarm when a County Judge Executive enters onto State property and seizes private property that was leased by the State.

It is a great cause for alarm when private property is seized without the most basic consideration of compliance with “Due Process of Law”.

Horses are defined as “property” in Kentucky law. Therefore; several laws are in place to prevent the undue and improper seizing of “property” by the government or its agents.  KRS 436.605 (2) outlines that an officer must go before any judge of a District Court for a search warrant if they have reasons to believe there is mistreatment.

His property was seized on Class A Misdemeanor charges which read, “A person is guilty of cruelty to animals in the second degree, when except as authorized by law, he intentionally or wantonly: subjects any animal to or causes cruel or injurious mistreatment through abandonment.”  Does a loose shoe and cockleburs rise to “cruel and injurious mistreatment” as described in Dr. Webb’s Veterinary assessment from the scene? Does this meet the legal standard of “intentionally and wantonly”?

Greg Turner and his daughter, Brittany were state vendors/concessionaires providing stable riding services in multiple state parks.  Greg had been hanging out in the stables and on the trails since he was a toddler, working with his father who started him in the business.

It further states that Park Rangers are responsible for any concerns at the Park.  Liberto confirmed that during the Turner’s tenure managing 4-5 stables each year throughout the state, they received only one complaint and it was related to a sick horse.

There is no record of this seizure which is why when Mr. Turner called the animal shelter trying to find his horses; no one could confirm anything about his horses. Policy requires that seized animals should be taken to approved vendors, not a randomly selected community member, chosen by the county judge executive.

Through open records, we obtained Officer Furlong’s field notes that consist of four sentences, her report to the county attorney and photographs.  Her first statement reads, “10 here with good body.”

In any investigation, you must interview the suspects, witnesses and informants and obtaining contact information.  Furlong’s report references several people who were there, but she failed to identify them, obtain contact information or statements:  a maintenance man, a Park Ranger and a Park employee named “Dana.”  Furlong also failed to speak with the Park Superintendent Danny Sallee.

The entire criminal file provided by County Attorney Thomas consisted of only three documents: the criminal summons, Furlong’s unsigned statement and the Veterinary report. Mr. Turner was prosecuted on the information contained in these reports.

Additionally, Furlong included subjective statements in her statement.  “The pasture wasn’t enough for the horses…” She should have measured the field and provided calculations according to Equine standards.

She stated there wasn’t any hay or grain. Three sentences later she states there were 3 (identified to be 50 pound) bags of unopened grain and she failed to mention a fourth bag that was open. At the Park, the horses were fed grain in their stalls.  Would it be unusual for the grain feeders to be empty in the middle of the day?

Furlong further states, “One of the horses had opossum disease.”  Veterinary reports confirm this diagnosis to be untrue.

Receipts confirm a local veterinary had been there earlier in the day, treating a horse that was sick with West Nile Virus.

Her only documentation was approximately 20 pictures, which did not capture any sores on the horses, flies, manure, or trees damaged as reported by County Judge Executive Hale said in an interview with WBKO.  He claimed the horses had eaten the bark from the trees.  Veterinarians refer to this as “Clippers” horses which like to pull bark from the trees for something to do.

The photos were not submitted as evidence in County Attorney Thomas’ file.

Furlong also states that a horse had cut legs, but there are no photos of this and the Veterinary report did not provide any reference to this.

There were no additional photos, provided via open Records, from the time the horses were seized (September 10, 2019) until the case was settled in court on February 9, 2021.  The horses were never weighed, vaccinated, blood tested or fecal tested as part of the documented case against Mr. Turner.  Furlong stated that she did not complete a single health assessment or visit to check on the horses.

A review of the invoices from Steve Bulle revealed only one vet visit for one sick horse and wormer medications while the horses were with him.

The Animal Clinic requested reimbursement for a total of eight visits, charges involving hoofs, dental work, and wormer medication. During the entire period of custodian detainment, only one horse had a blood test and colic.  Several invoices reference treating only one horse. Perhaps it was at a different location?  The Animal Clinic refused to provide the location of treatment.

Furlong made at least one effort to expand her documentation.  On January 2, 2020, she sent a text to an employee at the Kentucky Department of Agriculture, stating “I’ve got to find more dirt on this man.  He is cruel.  I’ve got to shut him down some how.”  Furlong attached nine pictures of malnourished horses.  In a recorded interview, she stated the photos were taken off of the Internet and were not the horses that were seized from Mr. Turner.

As of today, the horses at the park are not in compliance with the Boarding Agreement with the state which requires a valid proof of Coggins test.  There are no veterinary bills for this service as of January 2022.

Horses are classified as property and the county failed to uphold the defendant’s rights, trampling a founding principle in the democracy of our country.

Editor’s Note:  Judge Hale has requested a meeting with the author and editor.  If he provides any new quantifiable evidence, it will be reported in an upcoming issue. 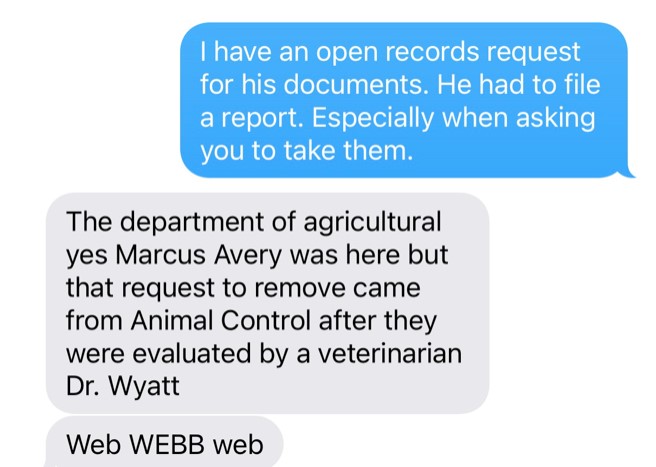 Text between Judge Hale and Paula Ratliff on May 10, 2022 when she asked for any additional details that he could provide regarding his statements that the “Department of Agriculture told them to take the horses immediately.”  On this date, his narrative changed. 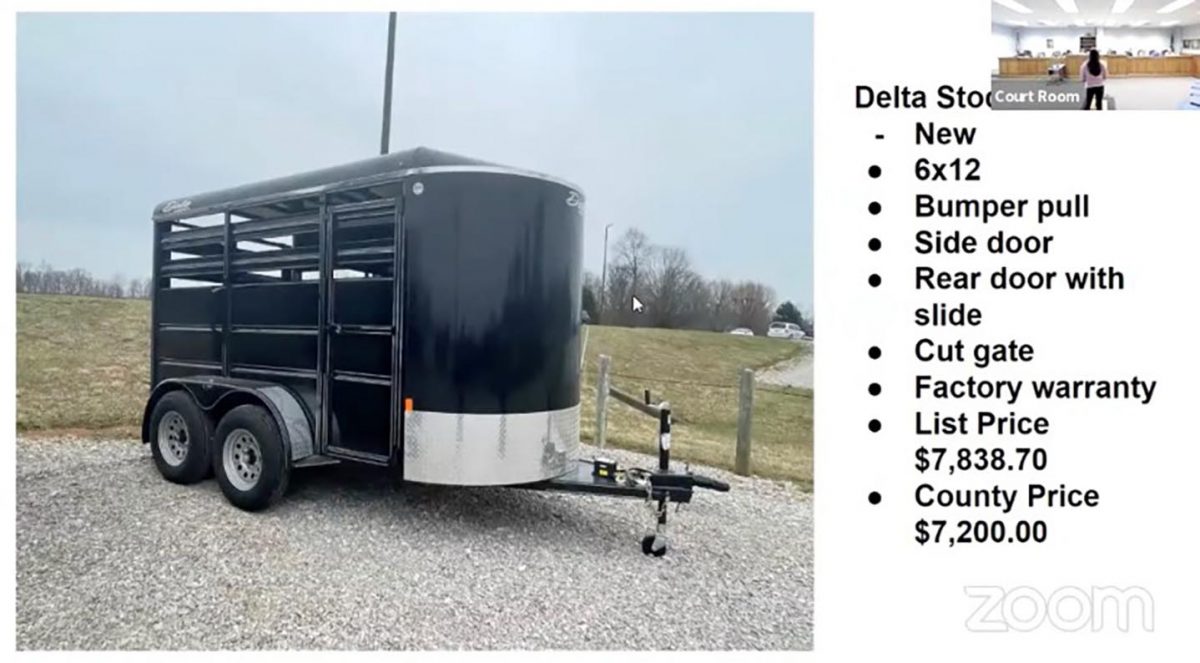 Screen grab of a horse trailer option Judge-Executive Micheal Hale requests the magistrates to purchase in the March 15, 2022 Barren County Fiscal Court meeting. Hale was visibly upset the vote didn’t go his way and this is what engaged magistrates to begin asking questions.