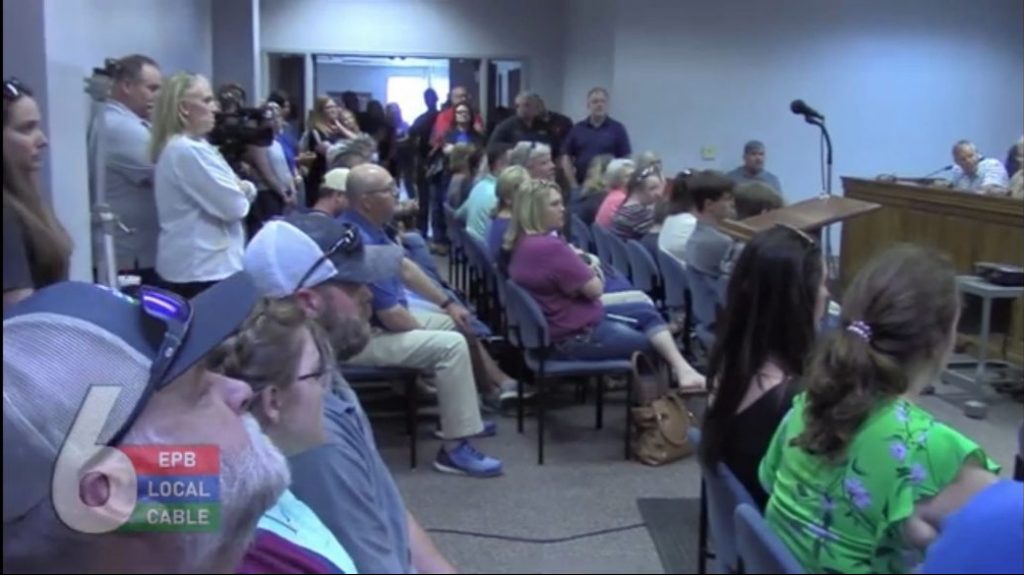 There was standing room only after residents filled the Barren County Fiscal Courtroom last Monday to hear discussions regarding the sale of the state park horses owned by the county. Photo/screengrab/GEPB

Some magistrates have pledged $1,000 each to local non-profit organizations to help facilitate good homes for the nine seized horses the court voted to sell in late April.

Citizens of the county filled the courtroom to hear the Barren Fiscal Court discuss the horses in another special-called meeting on May 2. Magistrates unanimously voted to sell the horses in the April 26th meeting and Monday’s meeting agenda was slated to “clarify the sale of the horses.”

Judge/Executive Micheal Hale, who voted against motions that support the sale of the horses in both meetings, shared how the county got to where they are in regards to the seized horses.

The magistrates weren’t made aware they had retained ownership and could sell the horses until a March 2022 fiscal court meeting. The majority spoke of the displeasure with Hale footing the bill for a year longer than the court was aware of. Contentions have swirled in recent meetings over the matter.

Neither Hale nor the county treasurer have any supporting documents referencing any specific horse reimbursement from CARES Act money he continually references.

The Barren County Progress (BCP) was provided billing detail totaling $41,004.14 in response to an April 11, 2022, open record request for all expenses associated with the horses.

However, once speaking with Veterinarian Steve Webb it was determined he had actually billed the county for more than a single visit shown in the original detail. So a second request was sent on April 22, 2022, to alert the treasurer of the error and another $2,897.47 was disclosed with details showing checks written to Jerry Bailey, the Animal Clinic, and Micheal Hale himself. It was described as a complete oversight and not intentional.

The total as of February 15, 2022, is at $43,901.61. The BCP continues to seek backup for horse expenses being reimbursed from Covid-19 relief funds as stated by Hale in several open meetings since magistrates were recently made aware of the county obtaining ownership of the horses. Hale didn’t disclose this information which he obtained on February 8, 2021, until an attempt to buy a horse trailer failed 13-months later in the March 15, 2022 meeting. Hale has said in meetings on the record it isn’t his job to inform magistrates of such things.

In last week’s meeting, County Attorney Kathryn Thomas discussed the legalities of addressing motions that have already passed. She advised the court amending the original motion would be ideal, which would also make it debatable again.

Specifically, Hale said there were no dates on the original motion, which is implicative of why Hale mandated another meeting over the horses. Magistrate Tim Coomer said the court hasn’t added dates within motions on “anything we’ve ever sold surplus.”

Much time was spent on the verbiage of the motion to amend the original, which was passed in late April to include the manner in which they would sell. That included individual sealed bids after tagging a number on each horse for viewing and placed on the county’s government website.

Coomer made the motion to amend the original to include the dates and time frames—advertising to be sent to the local newspaper by May 6, printed on May 12, and open the bids on May 19. Buyers will have 72 hours to remove the horses with two county department heads to coordinate the efforts. Magistrate Trent Riddle seconded the amended motion.

The crowd erupted in cheer when Hale immediately moved to amend Coomer’s motion to not allow slaughterhouses or the previous owner to bid on the horses.

When the room settled, Riddle said, “Judge, there’s not a member of this court, there’s not one member, sitting here that want these horses to go to the slaughterhouses,” before he seconded Hale’s motion. Riddle asked if horses could even be slaughtered in the United States anymore. As it would happen several times throughout the meeting, the crowd shouts their replies that horses can be.

Horse slaughtering became illegal in the U.S. in 2007 but even with federal legislative actions, possible loopholes still exist. Sometimes unsuspecting buyers may have the ill and inhumane intent to sell horses for exporting to countries that allow it, such as Canada.

The amendment Hale suggested was added and passed unanimously.

Barren resident, Lisa Held of SpanTech Company, addressed the court and requested a couple of non-profit organizations assist in finding homes for the horses before offering $10,000 to the county to purchase them. Riddle said he believed there are more than two non-profits that would want to be involved.

Magistrate Carl Dickerson revealed he has pledged $1,000 to a non-profit to buy the horses and challenged everyone in the room, including magistrates, to do the same.

Riddle followed up and said to be fair, any non-profits interested could participate and raise enough money through donations via the private sector. He also said he alongside Magistrates Coomer and Jeff Botts have pledged $1,000 each as well.

“I believe we can get this number up there so high that nobody can touch it,” Riddle said.

“But, most importantly, it’s going to be a win for the horses,” Riddle concluded.

Margie Patton, who has dedicated most of her life to the well-being of animals and currently sits on the Barren River Animal Welfare Association (BRAWA) board, said the local organization could help with the adoption process.

“We have no interest in buying horses or housing the horses…but we are very happy to be involved ensuring these horses get good placements,” Patton said.

Hale said the state tourism “assured” him the horses could remain at the park until the process of rehoming the horses is complete. At this time, it’s not completely clear why they couldn’t have stayed there when Hale made the decision to remove them from the property on Sept. 10, 2019.

Before the roll call vote, Riddle said, “I feel very confident that a local nonprofit will help these horses…I think at that point then BRAWA can step in, work with the nonprofit(s) to make sure these horses get adequate homes.” Riddle said fundraising mode has already started. Yet, they were focused on assuring the sale was done legally and permitting everyone the opportunity to bid.

Hale voted against the amendment to add the verbiage to the original motion to include the specifics of dates and timeframes.  It was a 7-1 vote, Hale against the magistrates. 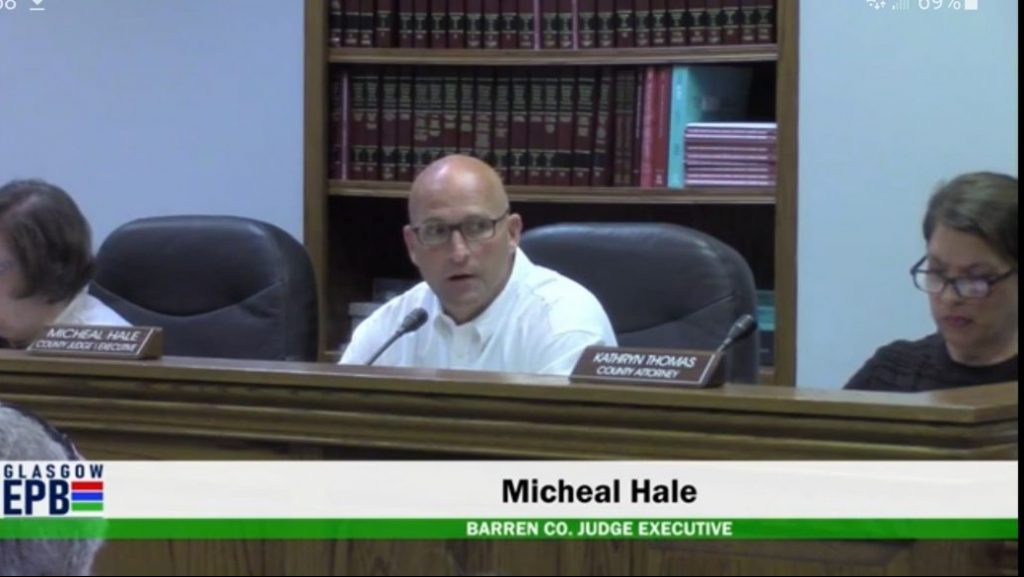 Barren County Judge/Executive Micheal Hale moved to amend a motion barring slaughterhouses and the previous owner from bidding on the horses despite being the sole dissenting votes for two motions that approved the sale of the county-owned horses. Photo/screengrab/GEPB 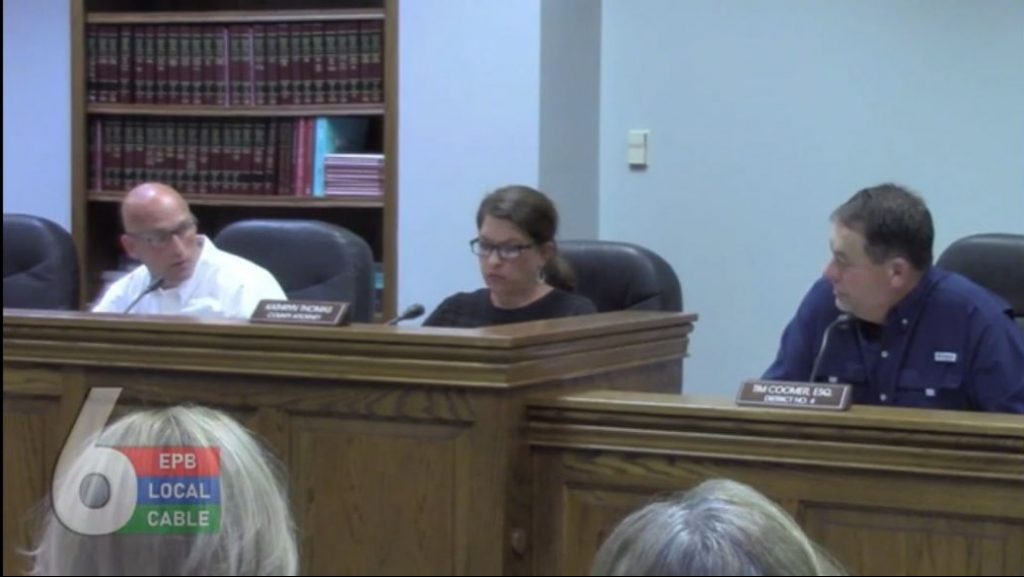 Magistrate Tim Coomer (right) and County Attorney Kathryn Thomas (center) discussed legalities in Coomer’s verbiage for a motion to add specific dates to an amendment for an April 26 motion approving the sale of the state park horses. Also pictured, at left, is Judge/Executive Micheal Hale. Photo/screengrab/GEPB