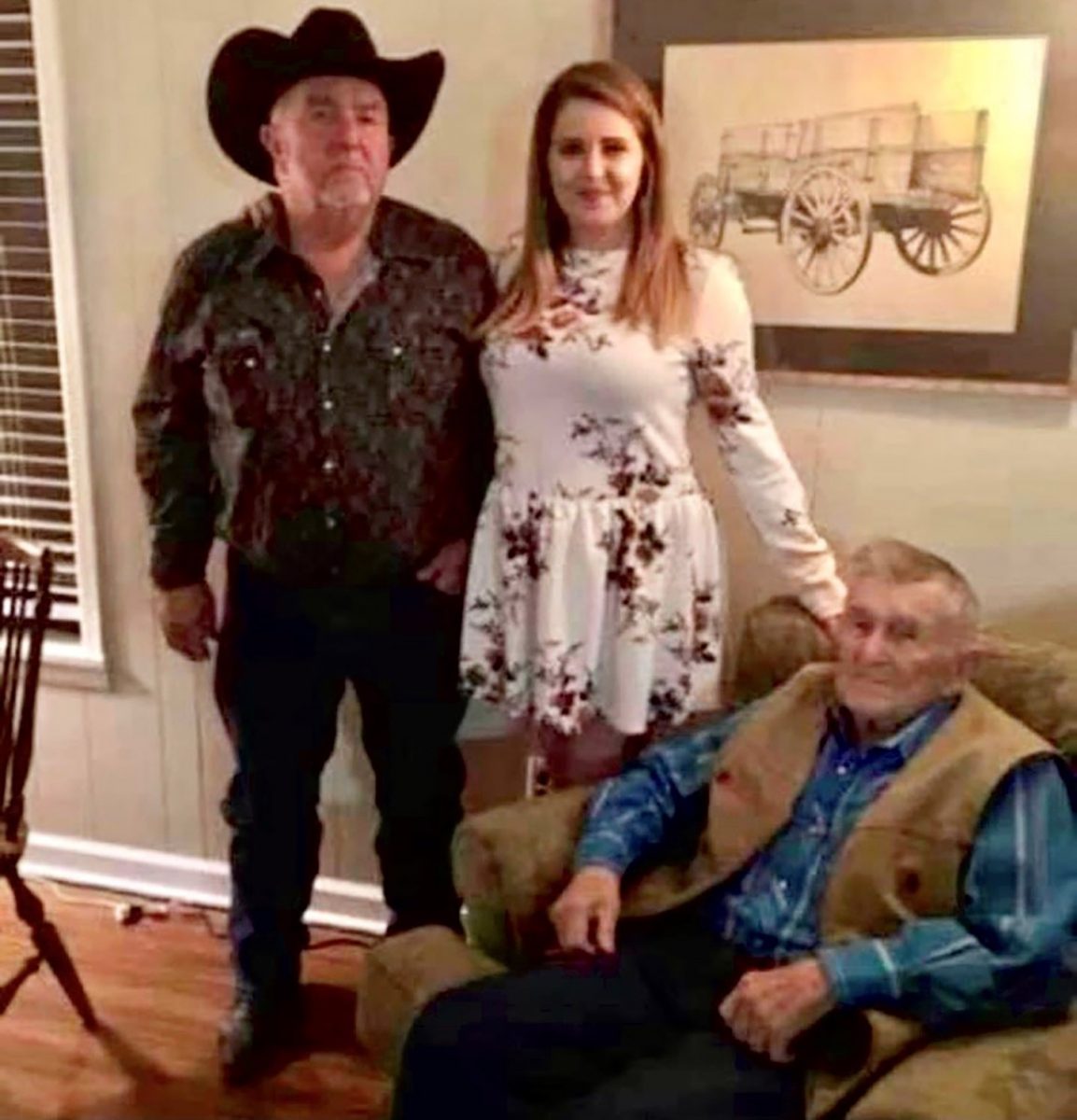 Greg Turner and his daughter Brittany Turner Reed and his 90-year old father Neville Turner.
There is over 50-years of non stop stable operating experience in this picture. They had been at Barren River Lake State Park a total of 10-years total.

The facts don’t support abandoned and left to die

Court documents, statements, receipts, and photographs taken the day the horses were seized, completely discredits the narrative provided by County Judge-Executive Micheal Hale alleging the horses were abandoned and left to die.

The documents were never reviewed in court because of costly restitution demands by the county.

Greg Turner, of Western Kentucky has been a horseman his entire life.  He is a second generation horseman, still horsing with his 90-year old father and feeling pride of his daughter, a third generation horse woman.

The family has provided trail horses to Kentucky riders at several state parks for over two decades, holding contracts at five state parks and other locations at the time of this incident..

The riding season runs from Memorial Day through Labor Day, seven days a week from 9:00 a.m.-5:00 p.m. and it requires several staff members to ensure that each day is covered.

After the riding season ended, Turner was not required to have staff present at the stable.  He would often try to offer rides on the weekends, sometimes up until October, if the weather cooperated and he had staff available.  The contract was flexible, allowing them to leave the horses at the park and sometimes they wintered their horses there.

As with any small business, it is challenging to hire and retain employees.  Yet, they have been successful because some people love being with the horses and enjoy the quietness of the stable.  “It’s why we love what we do, but it is time consuming and a commitment every single day.” said Turner.

After the riding season is over, they have found that being flexible helps with employees and allowing them discretion as to when they feed the horses. Some come before daybreak, others around noon and some will feed after dark.

Some stay and groom the horses, or take them for a walk or ride. Other times, they are in and out, hurrying on to school or another job.  Most are dependable, but there are illnesses and other priorities that get in the way from time to time.  Having multiple people helps ensure the horses are cared for and he is alerted of problems between his weekly visits.

Turner loves seeing someone take their first ride.  “It often becomes a life changing moment and it is rewarding to be part of it.”

So why were his horses seized from Barren River State Park?

Labor Day was September 2, 2019 which ended the riding season and the necessity to have staff present every day from 9-5.

On September 10, 2019, an anonymous woman called the Barren County Animal Control and said she had not seen anyone at the stables for several days and the horses were “in bad shape.” Shelley Furlong referenced the call and responded to the scene, arriving at the park at 1:00 p.m. to investigate.

She enlisted, Marcus Avery with the Department of Agriculture, an un-named Park Ranger, and a woman from the lodge named “Dana” to assist. The court documents do not contain any statements from Avery, the park ranger or “Dana” and no witnesses were identified for the court proceedings.

Eventually a call was placed to Barren County Judge-Executive Micheal Hale who arrived on the scene and requested Dr. Steve Webb, veterinarian with the Animal Clinic to examine the animals.  He arrived at 2:30 p.m.  His report describing the conditions of the nine horses is less than one-half page.

“In my opinion, the nine horses in question were not adequately being cared for by routine standards of care, particularly considering the public nature of the stable.  None of the animals were exhibiting any immediate life threatening symptoms.”

He wrote, “Several of the horses were malnourished and under conditioned” stating the park’s pasture  was devoid of significant forage so supplemental feeding of hay and possibly grain would be needed.”

As to his physical observations of the horses, he stated, “Several of the horses had large numbers of cockleburs in their manes and tails indicating a lack of grooming on a routine basis.  Several of the horses also were in need of hoof trimming and shoeing.  One horse did have a loose shoe which presented a potential hazard and the shoe was removed on site.  One sorrel with a right rear white pastern did have some superficial skin lesions from a halter. The halter was removed and the lesion should resolve without incident.”

“In my opinion, these nine horses were not receiving adequate care and nutrition. I believe all will make a full recovery once they are properly cared for and will not suffer any permanent damage.”

Based on this assessment, Judge Hale seized the horses and had them moved to Steve Bulle’s farm. Out of nine horses, one had a loose shoe, a few needed new shoes and their hoofs trimmed (the riding season was technically over), one had a superficial skin lesion and a few had cockleburs in their tails and mane.

Hale chose to remove the horses from the park without making a single call to Turner.

The Progress has requested and has not been provided any supplemental medical evaluations, treatment plans or photos relating to the conditions and treatment of the horses while in the custody of the county.

An unsigned narrative report on Glasgow Police Department letterhead provided from County Attorney Thomas states “We went out around 1300 hours to find nine horses in the field…one of the horses had opossum disease and was put to sleep that morning.” The report does not indicate who put a horse to sleep.

The Criminal Complaint processed by County Attorney states that a “horse with opossum disease ultimately had to be euthanized” inferring the euthanasia happened after the county seized possession of the horses.  Documents from the Animal Clinic contradict this disease.

Hale has repeatedly stated a horse was euthanized due to “malnutrition.” There is no evidence found to support these repeated public statements and Dr. Webb confirmed to JOBE Publishing “that the only horse put down had to do with an illness which was being treated and it was not due to malnutrition.

Receipts provided from the Animal Clinic prove that Dr. Jeremy Creek was there the morning of September 10th to euthanize a large animal.  A review of the travel log put him there at approximately 11:00 a.m. two hours before the BCAC arrived and seized the “abandoned” horses.

Dr. Creek was also there on August 19, 2019 when he conducted lab work and determined the horse had West Nile Virus, which is caused by mosquito bites. Receipts also confirm Kristi Jolly with the Animal Clinic was there on August 22, 2019 to administer treatment. These horses were not abandoned and they were being cared for by Turner with the help of a veterinarian.

The evidence also shows there were three bags of unopened horse food at the stable; as well as one partially full bag. These were 50 pound bags of Equine Nutrition from Burkmann Nutrition, evidence that the owner was in compliance of nutritional needs identified in Webb’s report. This is documented in photos and in a report provided by County Attorney Thomas.

Why was there a rush to remove the horses who were not in any immediate danger?  The nine horses were in a secure pasture with access to water, shade and shelter.  There was some foliage on the 40-acres (it was September in Kentucky) and grain was in the Tack room.  Couldn’t they have provided them some extra grain and reached out to the owner?

“No one can explain why Judge Hale felt compelled to remove the horses immediately without consulting me.  This could have been resolved immediately” said Turner.

“One horse was sick and he had lost a lot of weight and ultimately we had to put him down” said Turner.  “The county seized my horses without speaking one word to me and I never had my day in court,” he added.

He feels the county purposely delayed court, using COVID as an excuse to increase the penalties associated with the boarding of his horses, making it financially impossible for him to retrieve the horses.

Turner said, “I had to plead guilty or pay $35,000 to get my horses back.  It became very clear to me and my attorney that I didn’t have enough money to fight the county.”

The country had just endured years of COVID and with no tourists to ride the horses, there was no income to fight legal matters.

“Just look at the photos from that day they were seized and you will see beautiful horses with shiny, healthy coats.  He added, “I select horses on the leaner side because they carry riders 7-8 hours a day.  I also select horses a bit older because you can’t predict what a young horse might do. The older horses love the routine and enjoy walking the trails.”  A lot of work goes into special training for trail horses and having good physical conditioning. Turner suggested the average price of the healthy trained animals in his care at that time was $3,000 each and nothing today costs less.

He was very stern when responding to assumptions that he might abandon or hurt a horse.  “A couple of the horses were getting old and were close to being sent to pasture.  But they were not abandoned and to hear these lies being spewed that they were abused is more than anyone should have to endure.  This was pure government overreach in the horse stalls.”

“Because the season had ended, workers stopped in at various times to feed and exercise, but there were not people at the stables like when it is open for rides.  All of this happened because of an anonymous caller and an overzealous county judge-executive who declared me guilty of a terrible thing and stole my horses.”

“Most anyone would think something like this couldn’t happen in America but it sure did and Judge Hale has vilified me in Fiscal Court meetings, in newspaper articles, radio broadcasts, on social media and even on television, defaming my family name and heritage; when he had the facts proving different if he would have just chosen to look.” 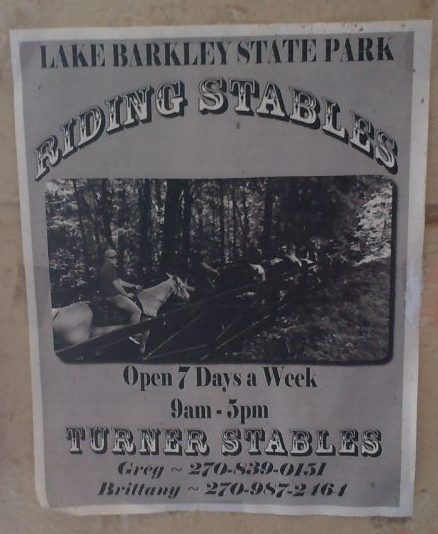 A photo of a sign with the owners’ names and phone numbers taken on September 10, 2019. 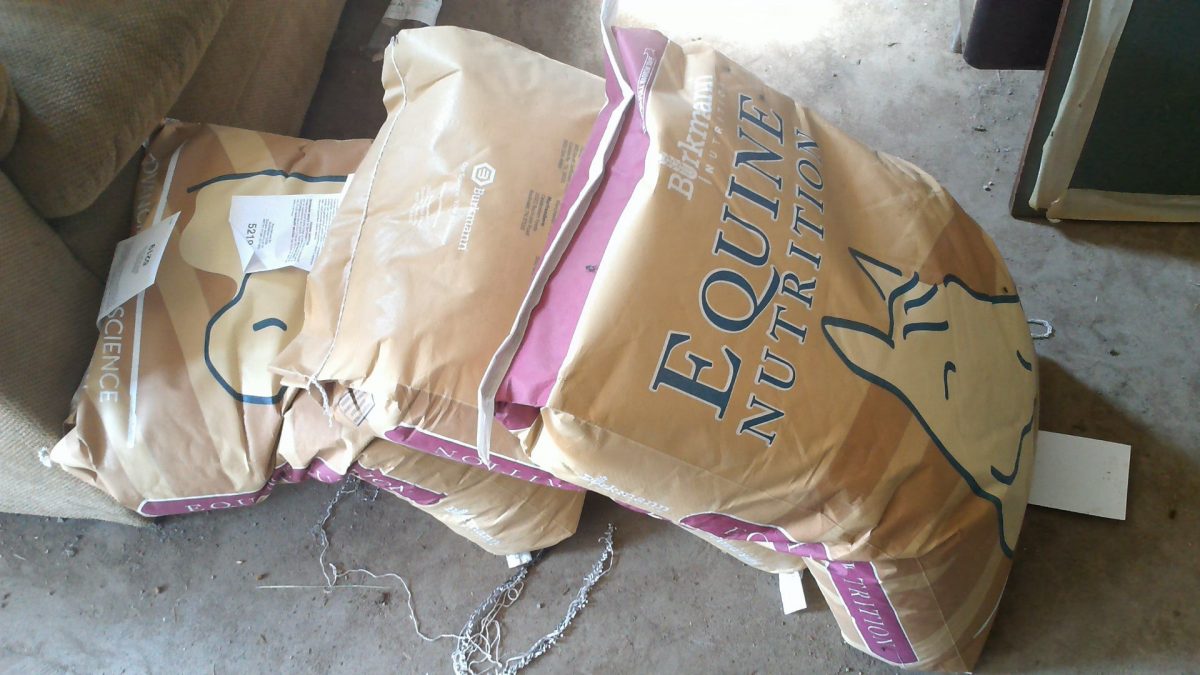 3 50 lb bags of feed and a half bag of oats at the stables the day the horse were removed. 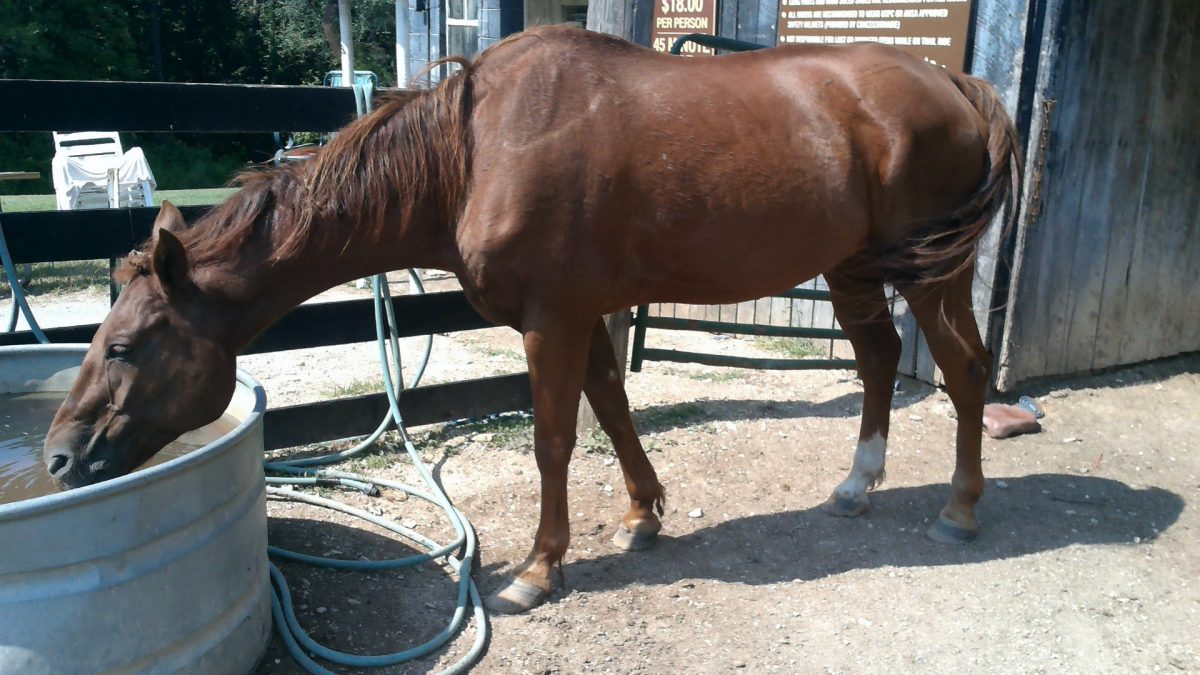 Water trough filled with water and a water hose next to it. Photo provided from September 10, 2019. 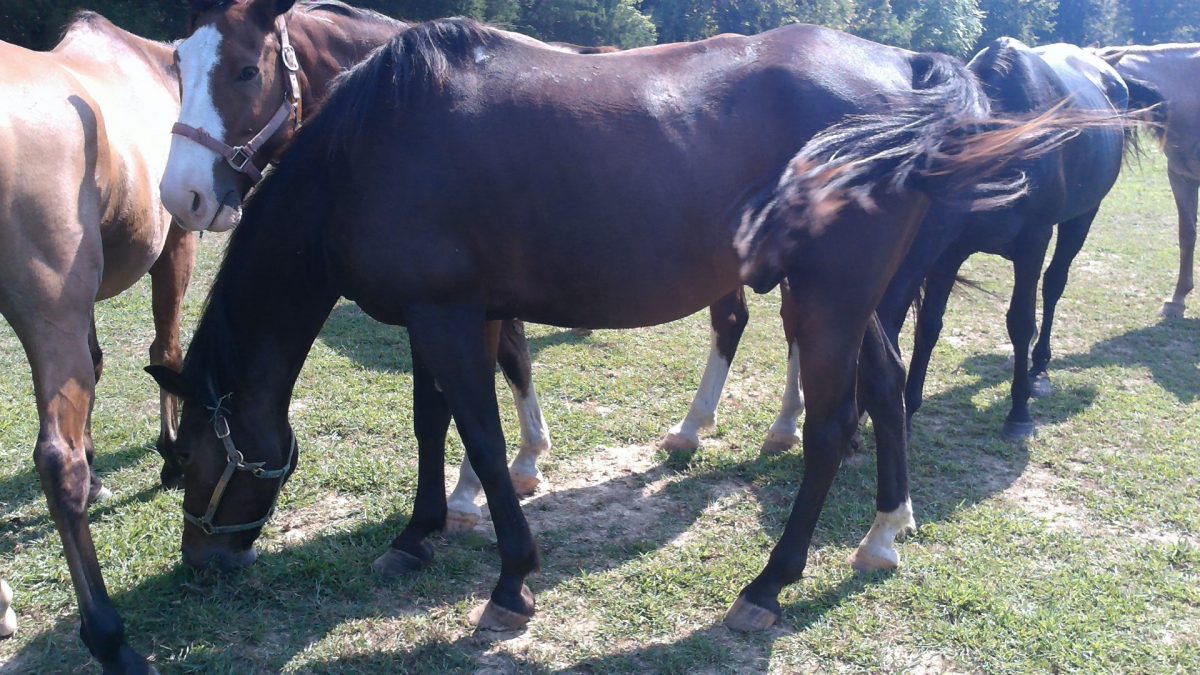 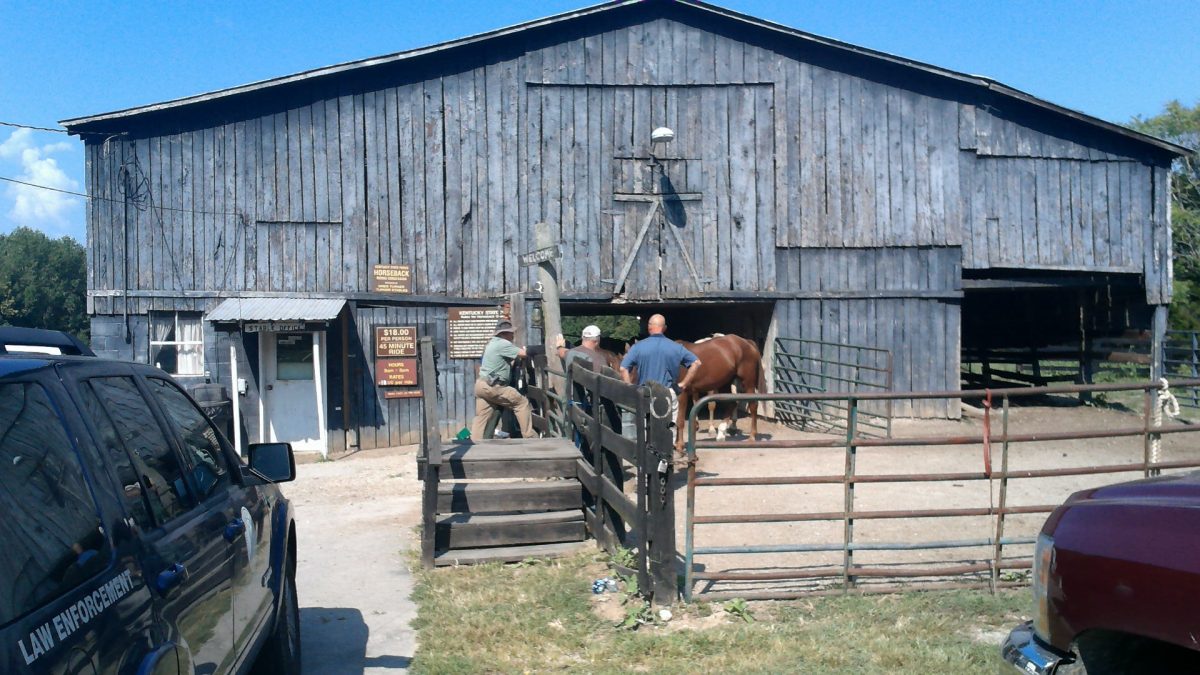 Judge/Executive Micheal Hale shown at the stables on September 10, 2019. The events began with an anonymous call to animal control and ended with Hale choosing to remove Greg Turner’s horses. Turner said nobody called him even with signs posted with his phone number. All photos provided that day were provided by Barren County Animal Control. 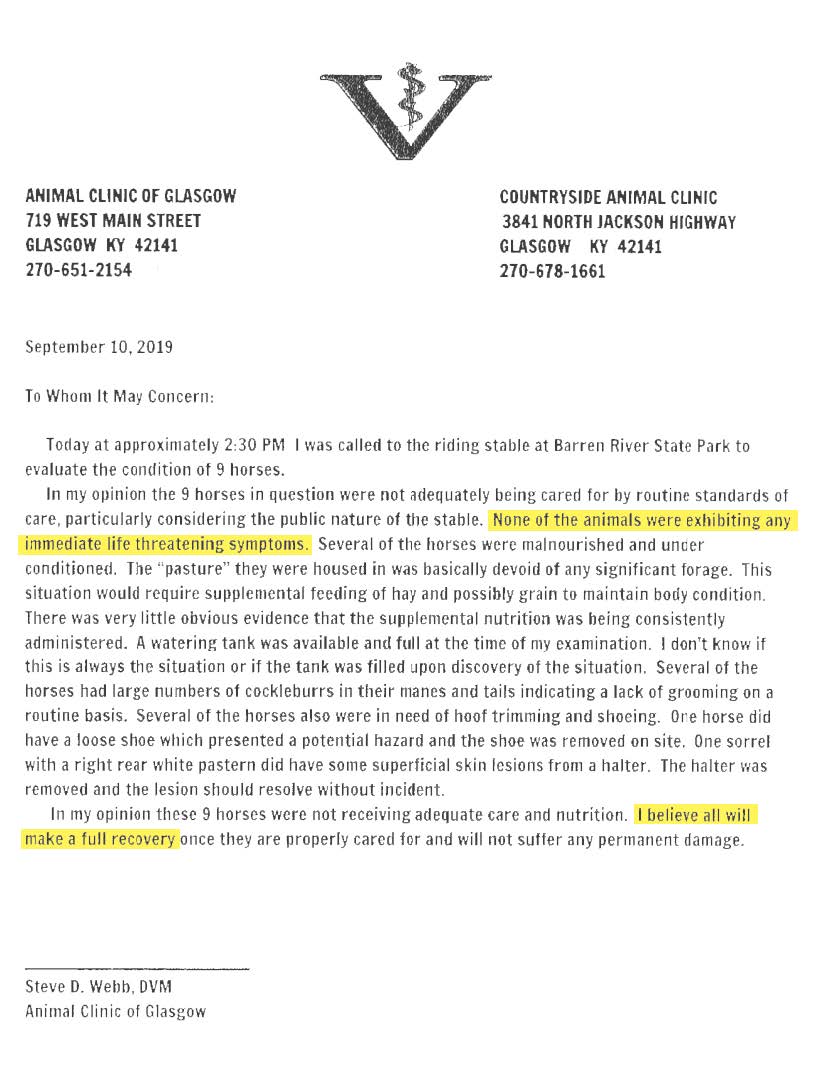 The only Veterinarian Report made on September 10, 2019 and it clearly states no horse was in immediate danger.