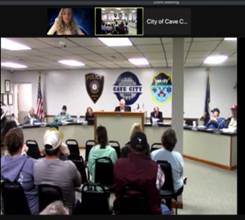 Cave City Council halts video teleconferencing for meetings in April 2022. This is a view of what Zoom meetings are like. Photo courtesy/screengrab

Councilmembers in Cave City voted to discontinue the use of video conferencing for meetings leaving two women on the council claiming the move feels discriminatory.

In the April 11th council meeting, discussions were had regarding Zoom, which is a virtual video conferencing platform that allows individuals to participate in face-to-face conversations via the Internet.

The council ultimately passed a motion to halt its use with Doyle, M. Houchens, and K. Houchens voting yes, Cline and Ford opposed, and Pedigo abstained.

According to meeting minutes, Councilwoman Ford made the first mention of virtual meetings on September 14, 2020. The following month, the council agreed to setting them up, and on November 9, 2020, the council officially and unanimously voted to approve virtual meetings starting in December 2020.

The minutes do not reflect which meetings were held virtually, but instead have occasional notations beside a councilmember’s name if present virtually. Over the course of fifteen meetings, minutes show that only Councilwomen Ford and Cline utilized Zoom for council meetings. Ford has three documented virtual appearances, and Cline has five.

In light of the mitigation of COVID-19-related restrictions, Hatcher said he put the Zoom discussion on the agenda after being approached by parties on both sides of the issue of continuing or discontinuing using the virtual platform. It is unclear as of press time if those who approached Hatcher were citizens and/or councilmembers.

However, Cline said she was “refused” a Zoom link as early as January 2022, before the council voted to stop using it. Cline said she also had COVID-19 that month but was absent due to the refusal.

She went on to say she also did not receive a link for the March meeting, giving her two meeting absences in the first quarter of the year. The minutes accurately reflect her absences in those two months. Cline additionally provided to Barren County Progress (BCP) screenshots of written communication for the dates she was absent requesting Zoom links to participate virtually.

Doyle made a motion to terminate Zoom for regularly scheduled council meetings before saying, “but we do not sell that big screen TV in case this COVID has to come back and fight us.” M. Houchens seconded the motion. Hatcher clarified with Doyle the verbiage to use “unless it’s an emergency.”

Before the April vote to discontinue Zoom, both councilwomen expressed they felt it was “discriminatory” and a type of punishment towards the only two women who used Zoom. Cline said she felt it was “very targeted.”

Ford referred to an earlier conversation she held with the mayor in March, “I expressed to you at that time…[Zoom] was still beneficial for us to continue to have…the fact that it looks a little discriminatory that two women use Zoom, they work out of town…”

Both Ford and Cline discussed their regular employment duties and noted they often travel for work. Ford also said she uses video teleconferencing for work similar to Zoom to conduct meetings across the United States.

Cline, who was present via Zoom, told the council, “The fact there’s really absolutely no reason why our city can’t keep up with the technology advances the rest of the world has.” She further said the city already purchased all the equipment needed and have a trained employee to execute it.

Cline also said broadcasting city meetings is “very marketable” for any future investments. “I think that’s something that we should be proud of and brag about instead of going backwards,” Cline said.

The Barren County Progress sent an open records request to the City Clerk of Cave City requesting costs associated with the use of Zoom. As of May 3, the total cost equates to $1,170.54 per the clerk’s reply in a letter.

As noted in the meeting by Cline, other local governments in the county use Zoom oftentimes, including Barren County Fiscal Court. Fiscal Court and Glasgow City Council upload their meetings for viewing at any time, and Park City’s Commission utilizes current technology as well.

The mayor called for other opinions from councilmembers and Doyle said if connection issues occur, it could end the meeting and referenced a KRS on the matter.

The council further discussed being present at council meetings as it relates to Zoom.

“When you run for office, you know you’re supposed to be here on one Monday night each month,” Doyle said.

Hatcher said he was “technology illiterate” but acknowledged it is “certainly” a beneficial tool.

Resident Melissa Ward Williams spoke to the council and agreed councilmembers should be present for meetings, but also have the capabilities to use technology when needed so councilmembers could also hold employment.

“The only people who are going to be allowed to be able to sit on council are retired or unemployed people,” Williams said.

Councilman Mike Houchens said, “If you can’t be here one day—one day a month—don’t run.”

City Attorney Bobby Richardson also referenced KRS 61.826, which says a public agency “may” conduct any meeting through video teleconference and it was basically up to the council to continue or discontinue using Zoom.

In regards to discussions about being present for meetings, the BCP has reviewed the minutes that also provide attendance dating back to January 2019 through March 2022 unless noted.

The following absences for sitting councilmembers are listed below:

Cline stated in the April meeting that she feels penalized for attempting to be present via Zoom while others aren’t for simply being absent yet not attempting to utilize Zoom to still conduct city business.