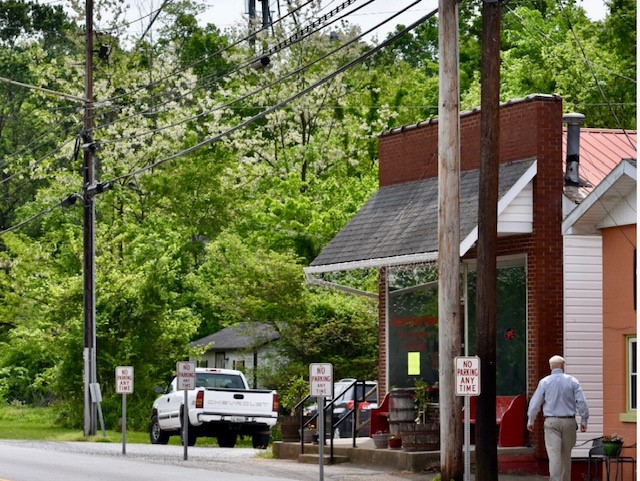 In the most congested area of Summer Shade, which encompasses a stretch of businesses along Highway 90, is a high traffic area. File photo by Jennifer Moonsong

In 2019, Ron Underwood of Summer Shade participated in the Edmonton-Metcalfe Chamber of Commerce leadership project. What he learned inspired him to spearhead a project designed to improve lighting, visibility, growth, and traffic control in the heart of Summer Shade.

“We visited the state capital on a field trip. While there we had an audience with Bart Roland and David Givens our State Representative and State Senator, respectively. I asked them how they help our rural communities. Their reply was to talk to Eric Sexton, now BRADD director and our tour guide. Eric and Emily Hathcock later visited and toured all of the downtown areas of Summer Shade. Eric provided some input on what we could do to enhance downtown as he has been a witness to other community developments. Eric and Emily told me that they would work on some ideas and return,” said Underwood.

They did just that. In April of 2019, Emily submitted the TAP grand application. “As I recall Judge Stilts had mentioned that she came and presented the Fiscal Court with the application, prior to submission.”

The project is called the Summer Shade Pedestrian Project.

The proposed project encourages drivers to slow down through the Summer Shade Community through the inclusion of a crosswalk, and enhanced lighting along renovated curbs and sidewalks. Further, according to the Federal Highway Administration, providing walkways for pedestrians dramatically increases how well pedestrians perceive their needs are being met along roadways. This particular stretch of roadway is currently perceived as unsafe for pedestrians, with traffic regularly driving 55+ in the 35mph zone, sidewalk, and the roadway being almost level with little to no separation between large tractor-trailer traffic and pedestrians.

According to an extract from the March 4, 2020 newspaper archive, the project was approved: “A resolution to move forward with a Summer Shade Pedestrian Project funded by the state was unanimously approved.”

In a letter from Fiscal Court to the Kentucky Transportation Cabinet dated May 1, 2019, the Court affirmed its willingness to provide $47,008 of matching funds for the Summer Shade Pedestrian Improvement Project, Which was 20% of the project cost.

In June of 2019, a Facebook post from BRADD announced Metcalfe County as the recipient of the grant.

“Judge Stilts signed up to be the project manager vs leaving the management to BRADD,” Underwood said.

However, since that time there has been no progress.

Judge/Executive Stilts stated that COVID has been one of the hurdles. This has greatly slowed down project progress.

“Nothing has been done on the project. I regularly made contact with Harold about the status of the project, was told it was funded, but there was no money for the project. That the county had to pay for the entire project and then get reimbursed, and the county couldn’t spend $250,000.”

“At the Fiscal court meeting last month, I enquired about the project and was told that they would have to go see if it was funded or not funded…and there was concern about flooding and what was included in the project scope,” said Underwood. Underwood added that concerns must be speculation because an engineer has not reviewed the project thus far.

Since the meeting, Underwood has spoken with Joe Plunk, of the Kentucky Transportation Cabinet. According to Plunk, the application expires in June 2022. However, it is not uncommon for counties to request and receive an extension.

The reimbursement of the project expense needs to be done at the end of the project as progress payments could be made. i.e. the Preliminary Engineering and Final Design are budgeted for $20,000. The County would pay the 20 and then get 16 back, less the 20%.

At this phase, Judge/Executive Stilts plans to take the matter up with Magistrates, and Underwood is hopeful that an extension will be filed for the project.

Underwood readily admits that like all projects, this particular project has had some pushback from within the community.

“Like any public spending, there are going to be people against it for all kinds of reasons. But if we don’t use the $250,000 it will get spent in another county. This is State and Federal monies that our taxes provided. Why not get something back? I believe the court should ask for an extension and let the next administration make the choice,” said Underwood.

He added that he understands the hindrances faced by the current administration, including Covid, FEMA compliance, and loss of revenue, and that these factors were beyond anyone’s control. “However, I do believe that some of the current magistrates are uncomfortable moving ahead right before the primary,” said Underwood.

If the project moved forward, improvements could be seen by the summer of 2023.