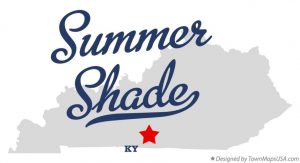 Exerts of an article written by the Metcalfe Co. Homemakers, ca 1940-41.

The little town of Summer Shade is situated in the southwestern part of Metcalfe County formed from Barren County in 1860. Summer Shade is on State Highway 90 which is called the John Muir Trail. The town was first called Glovers Creek. Around 1872, Honorable W. M. Riggs succeeded in changing the post office name to Summer Shade. It is assumed the appellation came from the large trees and their friendly shade that protected the town and sheltered the wild game that roamed through the adjacent woodlands.

The post office was located in the dry goods store of Ezekiel Witty and W. M. Riggs, who were among the first merchants of the community.

In 1860, Dr. Lenzie Watson came to Summer Shade from Hart County (originally Virginia) and built the house where R. C. Meadow now lives. It is a well-preserved house regardless of its age. A few other houses were built earlier than this one but their construction date is unknown.

Dr. Lenzie Watson and Dr. Thomas Hawkins HOARD were among the first physicians in Summer Shade.

In 1871 or 1872, the Mt. Carmel School, made up of patrons from surrounding schools and from Summer Shade, was established about one mile east of the town. It was founded by Professor R. E. Grinstead but flourished for only a short time. In 1873, Professor Grinstead founded the Summer Shade Institute, erecting the buildings, and successfully conducting the institution for two years.

He was then elected to the State Legislature in 1875. The school property was purchased by Professor J. W. McMoore from Tennessee. Moore, a preacher, and educator remained as principal until 1877 at which time Professor A. C. Taylor became principal. Taylor was an uncle of O. D. Howard of Summer Shade and Dr. C. C. Howard of Glasgow, Kentucky.

In 1886, through the efforts of Honorable W. M. Riggs, a member of the State Legislature, the school received from the legislature a liberal charter which enlarged its scope until it was permitted to confer the B. S. degree. Two who obtained their B. S. degrees were Professor Johnnie Howard and Miss Lizzie Denham Evans.

The faculty was composed of Professor Taylor, M. D. Taylor, E. T. Thomas, Dewis Langford, and Miss Winston, instructor of instrumental music. A nice dormitory near the school was occupied by the young ladies, while the young men boarded in private homes for $1.25 per week for table board, or $2.00 per week for everything furnished. Tuition was from $5.00 to $10.00 per month, and the school was successful for several years. Eventually, Professor Taylor, one of the most outstanding teachers of Summer Shade, moved away and died a few years later.

Before 1890, the free school at Mt. Carmel had been transferred to Summer Shade but not until in 1890 was it permanently established. The original 1-room schoolhouse was repurposed into a school for black children.

Summer Shade has three churches: The Methodist organized about 1870 and built on the lot given by Dr. Watson; The Christian organized in 1876 held their first meeting in the school building or the Masonic Hall until their church was built about 1882; the Baptist organized in 1882 held their meetings in the Masonic Hall for several years but disbanded because of insufficient members until 1906 when they reorganized and built a church on a lot given by Mr. and Mrs. J. B. Swope.

A roller mill was built in 1901 by James Toomey, James Shirley, and James Witty, who sold his interest to Joseph Clark in 1901. Clark helped in the operation of the mill until 1926 when he sold his interest and retired.

The Bank of Summer Shade was established in 1907 with Dr. G. M. Depew as a cashier. Before that time the citizens of Summer Shade did most of their banking in Glasgow, Kentucky.

About three miles east of Summer Shade is the noted Branstetter Park founded between 1925 and 1927 by John Lew Branstetter of Oklahoma and Florida. Branstetter, a native of this community, attended the homecomings at Beaumont and enjoyed them so much that he founded the park as a place to celebrate the annual August homecoming. As long as he was able he returned. Many people throughout the state gather there to meet and greet friends of other days and to enjoy an excellent program prepared for the occasion.

Summer Shade has a number of business houses and is a busy little town. It has five well-stocked stores, three filling stations, one roller mill, one planning mill, one bank, one school, three churches, three cream stations, an undertaker’s establishment, one barbershop, and one post office with three R.F.D. routes totaling about one hundred miles.

Around 1942, land lying one mile east of Summer Shade was purchased from C. W. Word for the location of the Tennessee Valley Primary Substation. This is reported to be a million-dollar project. Army engineers in charge of constructing Dale Hollow Dam for flood control needed a market for their power, therefore the substation at Summer Shade, since it is closer from Dale Hollow to the two 154000 KV lines owned by the TVA. The substation receives all the generation (400000 KWH) from Dale Hollow dam. The 2 Louisville lines interconnect with the Northern Utilities Companies; the Bowling Green steam plant is interconnected by a 66000 KV line. The station also carries the load of Scottsville and the local REA distributors.

The operation of the station requires four men working forty hours per week, and one relief operator for vacation and sick leave. When Wolf Creek Dam is finished by the Army, the station will be enlarged. It is a tribute to skillful electrical engineering construction and at night, when the lights are turned on, it is quite pretty in its rural setting. 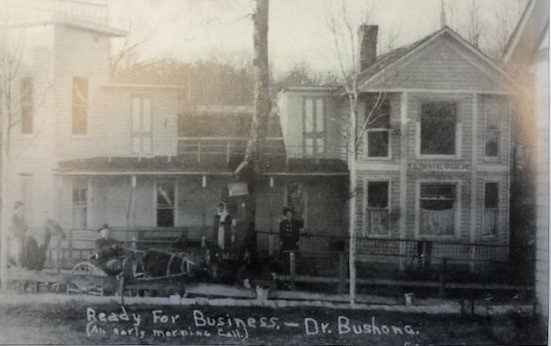 Dr. Percy Bushong is pictured in his buggy in front of his office in Summer Shade. The photo says “An early morning call.” He was a medical doctor and a dentist. Photo courtesy of Laurie Butler 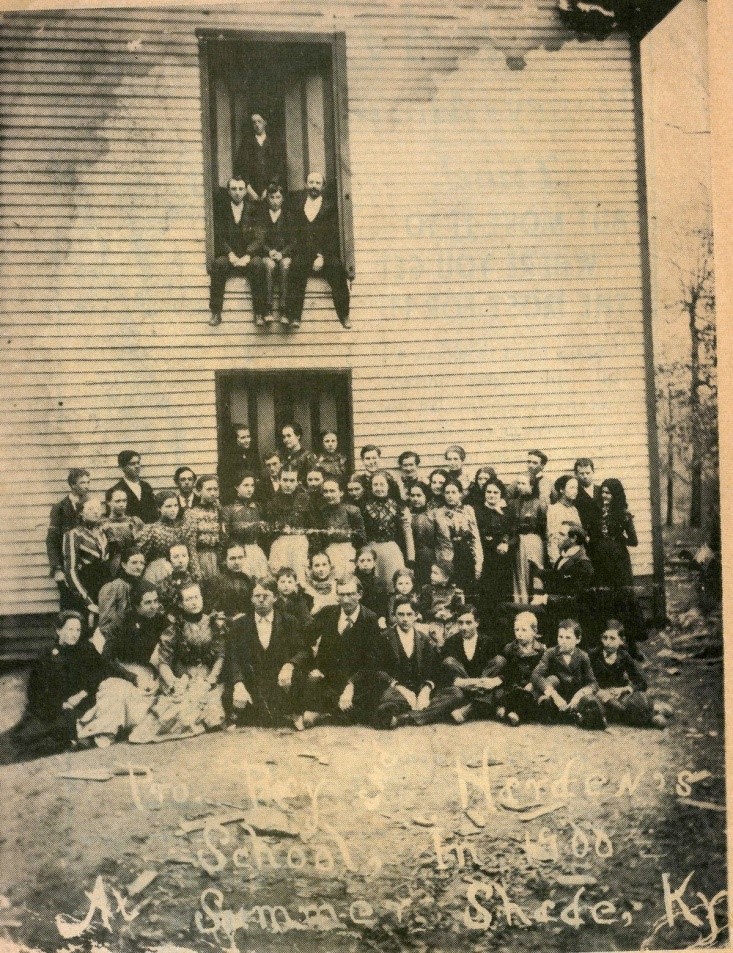 The school in Summer Shade in 1900 as written on the photo. Photo contributed by Nancy Richey, Visual Resources Librarian at Kentucky Library Research Collections of Western Kentucky University