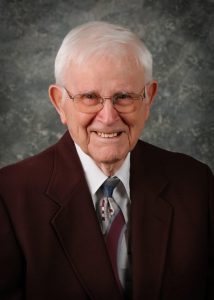 EDMONTON – Howard Bruce Keel, 93, passed away on Saturday, May 7, 2022. He is preceded in death by his parents, Carson and Lucy Keel, and two sons-in-law Roger Jessie and Bill Snedegar.

Bruce was born in Pineville, Ky. His school years were spent in the Pineville Independent School System. He then went on to attend Georgetown College on a football scholarship. He graduated in 1951 with a Bachelor of Arts degree. He was drafted at the end of his college career, joined the Navy, and sailed around the world on the destroyer USS Porter and is a Korean War Veteran. When he left the Navy, he attended UK and received a master’s degree with teaching certification and then later received his Rank 1 at WKU.

Bruce’s first teaching job was at Ashland, KY at the high school where he was also an assistant football and basketball coach. After three years, he moved to Berea, KY where he taught and coached eight-man football. In 1961, he came to Metcalfe County to teach and coach football and later became principal of Metcalfe County High School. He also worked in the Central office as the Supervisor of Instruction. He retired in 1989, after thirty-two years of being in the field of education and coaching, with twenty-eight of those years in Metcalfe County.

In service to his community outside of school, he served on the Bowling Park Board from its beginning until around 2010. He attends Edmonton United Methodist Church where he taught Sunday school for over thirty years. He served nine years on a Mental Health Board composed of several surrounding counties. He also was a member of the navy MARS (Military Auxiliary Radio System) until the program was closed.

Bruce enjoyed many hobbies throughout his life: hunting, fishing, camping, traveling, painting, woodworking, wood carving, and being an amateur radio operator. He has been a lifelong learner.

Bruce often remarked: “I have had a good life, much better than I thought I would, and Metcalfe County has been good to me.”

The family would like to extend a heartfelt thank you to T.J. Samson Hospice and Rhonda Harris Page for excellent care and compassion during his illness.