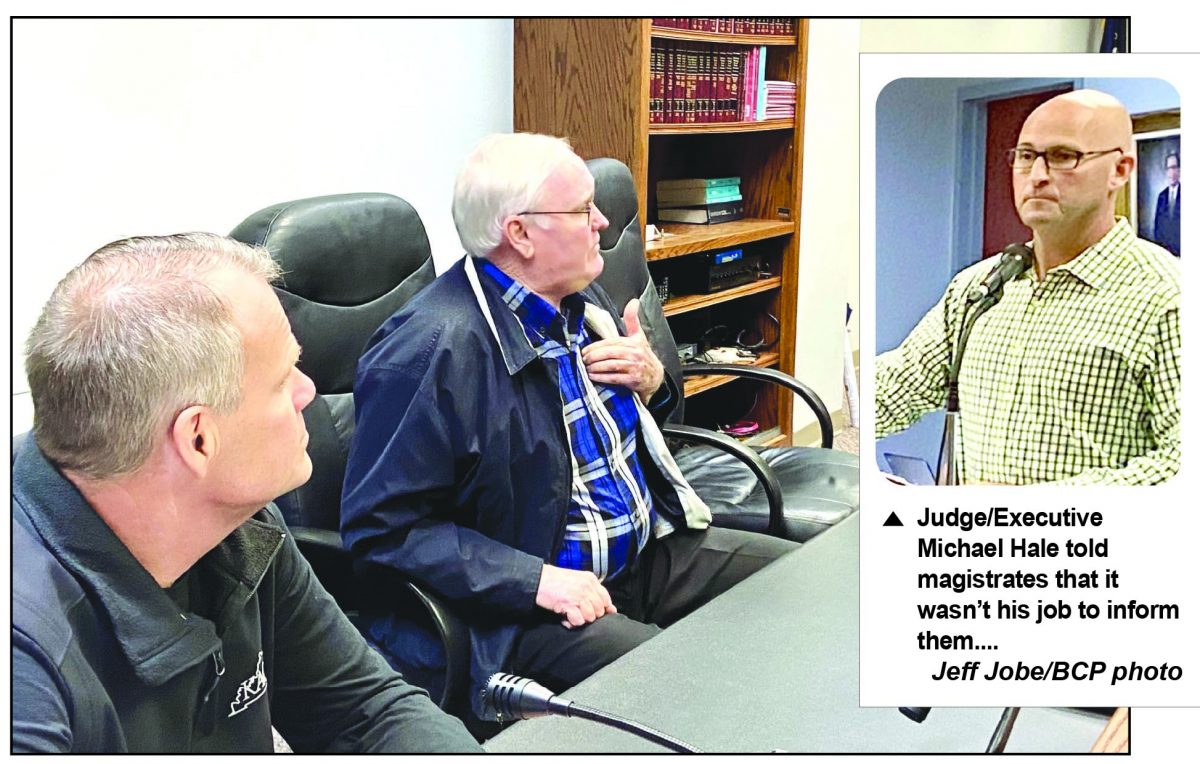 Magistrates Jeff Botts and Carl Dickerson asked Hale for updates on the horses. Hale said it wasn’t his job to tell them the county who owned the horses and provide them updates. Jeff Jobe/BCP photo

Judge/Executive Micheal Hale found himself at the forefront of tax dollars being expensed a year longer than necessary.

Hale took to the podium in a joint committee meeting between the Building and Property and Emergency Management/Solid Waste Committees on April 19 in more of defense than explanatory.

Hale began by detailing the case history. In October 2019, ten horses were removed after being found malnourished at the Barren River Lake State Resort Park and became the county’s responsibility. Hale contacted Steve Bulle who agreed to help restore the horses’ health as their conditions were severe, leaving one requiring euthanasia.

Hale stated that when the COVID-19 pandemic hit, which left the courts shut down, the animal cruelty case against Greg Turner was delayed.

Bulle charged the county $135 a day to care for the nine horses until late spring of 2020 when the Court voted to move the horses back to the park to save money. The county paid, according to expenditure records, around $35,000 from October 2019 through May 2020. Hale has stated in open meetings that the CARES funds have reimbursed the expenditures. However, open record documents show no discussion with magistrates or requests being made.

In a special called meeting on April 30, 2020, the Barren County Fiscal Court voted unanimously (absent was Magistrate Trent Riddle) to allow the county to enter a contractual agreement with the State Department of Parks to move the horses back onto the park’s property.

The horses went back to the park under the agreement that the county would be responsible for meeting the horses’ needs including, but not limited to, bedding, feed, water, fence enclosures, proof of negative Coggins tests, public liability insurance, and security staff “at all times.”

In this April 30, 2020 meeting it was made clear to magistrates that Turner still legally owned the horses while awaiting the criminal proceedings. Nothing could be done until the case was closed. This was the last time the horses were discussed in open meeting with the magistrates until now.

Questions began circulating about the whereabouts and conditions of the horses, as well as the associated expenditures, when Magistrate Jeff Botts suggested transparency with the state park horses after a requested purchase for a horse trailer on March 15, 2022.

Issue was taken by some magistrates that Hale failed to inform and update the Court when the case was closed on February 8, 2021, and neither court nor committees have approved the incurring costs.

Magistrate Carl Dickerson asked Hale why he didn’t share that the criminal case had been closed and ownership transferred to the county over a year ago. Hale replied, “I didn’t have to tell you about it in February.”

Dickerson clarified Hale’s response that it wasn’t Hale’s job to inform the magistrates when Barren County receives property through a court settlement. Hale once again said, “I don’t believe it is my job.”

Dickerson left the meeting twenty minutes after it started while saying Barren County needed to find somebody to take that responsibility.

Hale then said it was his “responsibility to tell you all” about the horses and not to ask county employees. Apparently when he chose to do it and not when they asked.

That needs to come straight from me—if it was on his mind that day, why didn’t he call me?” Hale said. “He didn’t call me.” He was referencing Dickerson attempting to ask a county employee of the horse whereabouts and details. Hale said Dickerson called a county employee a liar and Magistrate Tim Coomer said, “Jeff (Botts) and I didn’t hear any such thing Judge.”

That’s when local newspaper owner and Barren County Progress (BCP) Publisher Jeff Jobe, who stood at the end of the magistrates, said “I did.”

Jobe attempted to ask questions referring to Hale not responding to horse inquiries from the press.

Jobe asked how Hale expects the community to be made aware of these issues.

Hale then pointed at and directed Barren County Sheriff Kent Keen, “You need to control him (Jobe), okay? I’m talking to these Court members.”

Keen clarified it was an open meeting and shortly after told the duo they would each have a chance to speak.

Jobe said he called his magistrate, who met with Hale, and Hale provided no clear detail for the questions being asked.

Jobe had sent an inquiry weeks before the meeting asking why some of the horses were not at the park and if any were on Hale’s personal property. It wasn’t until this presentation that Hale revealed one was being kept on his property due to bullying and a vet-recommended isolation.

The BCP has followed up with local veterinarian Dr. Steve Webb and will detail this conversation in an upcoming issue. Anyone owning horses know they must be separated to feed as mares won’t even allow colts to eat; this is a herd dominance situation and one in which Bulle surely had to deal with as well.

Hale said he has incurred personal costs for the care. He stated he had receipts to prove it, and the BCP has reached out to Hale for those receipts after the meeting. As of press time, the BCP hasn’t received any of those copies. The newspaper hopes to be able to get a clear picture for how long the horse has been at Hale’s home.

Magistrate Mark Bowman asked, “Where are we at on the costs?”

Hale replied the hay bill wasn’t turned in, and he took care of it himself, as well as a vet bill.

He responded, “So, you’re out, what? Ten dollars for a bag of feed, four bags, forty bucks roughly?”

Hale said the substantial bill was reimbursed “roughly” $25,000 due to the costs being “above and beyond” what the county may have spent without the pandemic impact through the CARES Act. No approval was ever requested of the governing body of Fiscal Court or discussion until the failed horse trailer purchase meeting in March 2022.

Bowman then specifically asked how much money the county has incurred since the case closure in Feb. 2021.
“I couldn’t tell you that,” Hale said. “I don’t have those numbers.”

The BCP has learned after this meeting that another $2,800 of veterinarian bills were not provided to the newspaper when asked. This will bring the total cost for the horse care to $44,000. County Treasurer Virginia Hoffman is out of town until Tuesday, April 26 and could not help track down this omission or error in communication.

Magistrate Tim Coomer made a motion, seconded by Botts, to rid the county of the financial burden of the horses and suggested a potential agreement for special needs children equine therapy.

“I just don’t think the county needs to be in the horse business,” Coomer said.
Hale disagreed, citing the horses could provide opportunities for the county. He also suggested fundraising to self-sustain the ongoing costs.

Jobe spoke up again saying he doesn’t think this can be done legally. He said the horses belong to tax payers, and you just can’t give them away.

Jobe explained that he tried to help by reaching out multiple times to Hale after he began receiving questions from his readers regarding the horses. Jobe left messages in the office and reached out on Facebook where he was met with a reply stating not to message that particular account. He also texted and e-mailed over a span of several weeks. Hale stated he was aware Jobe had left messages for him.

Hale attacked the local newspaper publisher by calling Jobe a “dangerous man” and a “stalker” for questioning and attempting to find the county-owned property.

Jobe suggested that addressing this concern should be done the right way or read about it.

Moments later, Jobe asked Hale if he was aware of two local families who had offered to care for the horses at no costs. Hale denied knowing.

Emergency Management Director Tracy Shirley made comments admitting that he cares for the horses on a daily basis. Shirley is a full-time $50,000+ salaried employee who drives a county vehicle with fuel paid for by tax dollars.

“I’m the one that goes to feed and water the horses everyday,” Shirley said. “There was not a day there was only five horses.”

Shirley also said he counts the horses each day and that there are eight horses at the park. He didn’t disclosed how long it had just been the eight.

Jobe told Shirley he had called him to discuss the horses, and Shirley denied that ever happened. After the meeting, Jobe confirmed he had mistaken Shirley and Danny Sallee, State Park Manager.

Botts voiced his reasoning for supporting to re-home the horses was due to ongoing miscommunication and lack of trust. He said their ultimate goal would be to reunify again.

“I’m learning with court members, we’re thinking we’re picky or you’re not sharing the information,” Botts said, “I think that’s where we get into trouble.”

“If we can just find where we trust each other, and you do yours, and we do our job,” Botts added.

Coomer specified his motion that the county sell the horses in a legal manner, and it passed unanimously with committee members Coomer, Botts, Bowman, and Kenneth Sartin.

After the meeting last week, County Attorney Kathryn Thomas confirmed to BCP that she informed Judge Hale “of Mr. Turner’s plea and its terms regarding the horses on February 8, 2021.” The day it happened.

Fiscal Court will meet in a special called meeting on April 26 for a full court vote on the fate of the horses.

The Barren County Progress has requested more information associated with the county-owned horses, and updates will be given as they are made available. 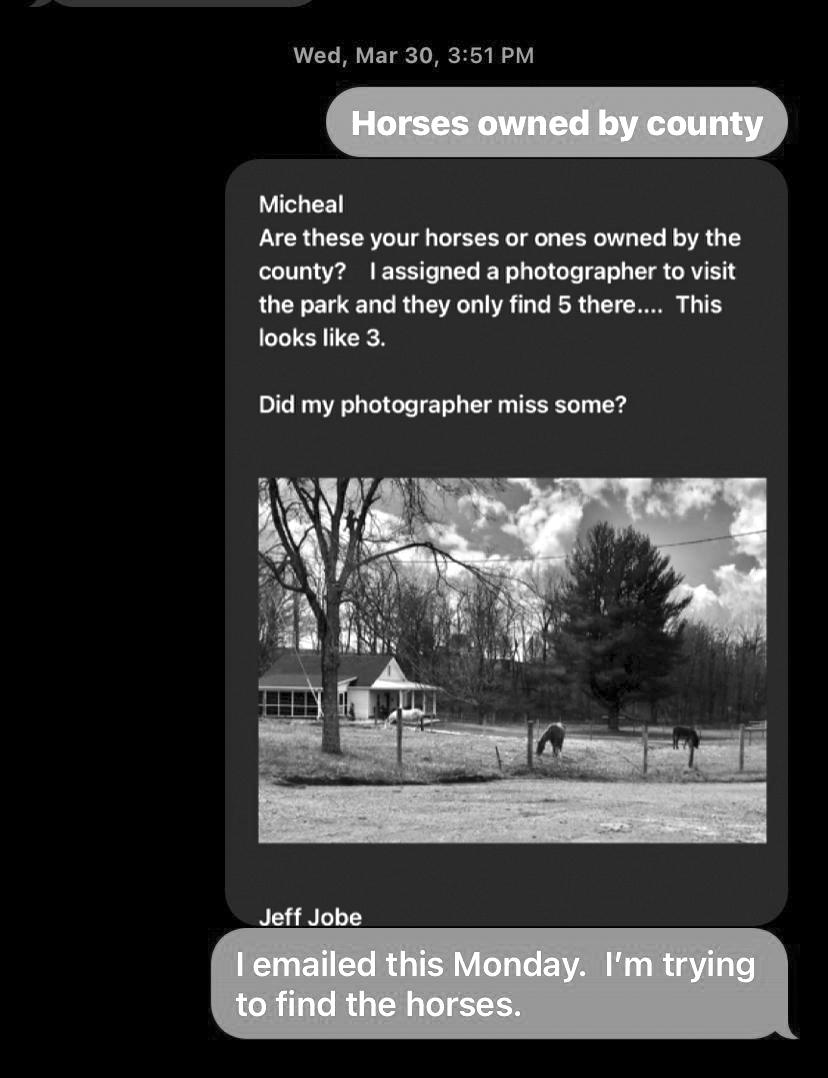 March 30, 2022; three weeks prior to the BCP publishing the photo. This text message shows Hale had opened but chose not to respond. The BCP assigned a photographer to find the horses and she did. Hale had one at his home claiming he adopted the county owned horse. 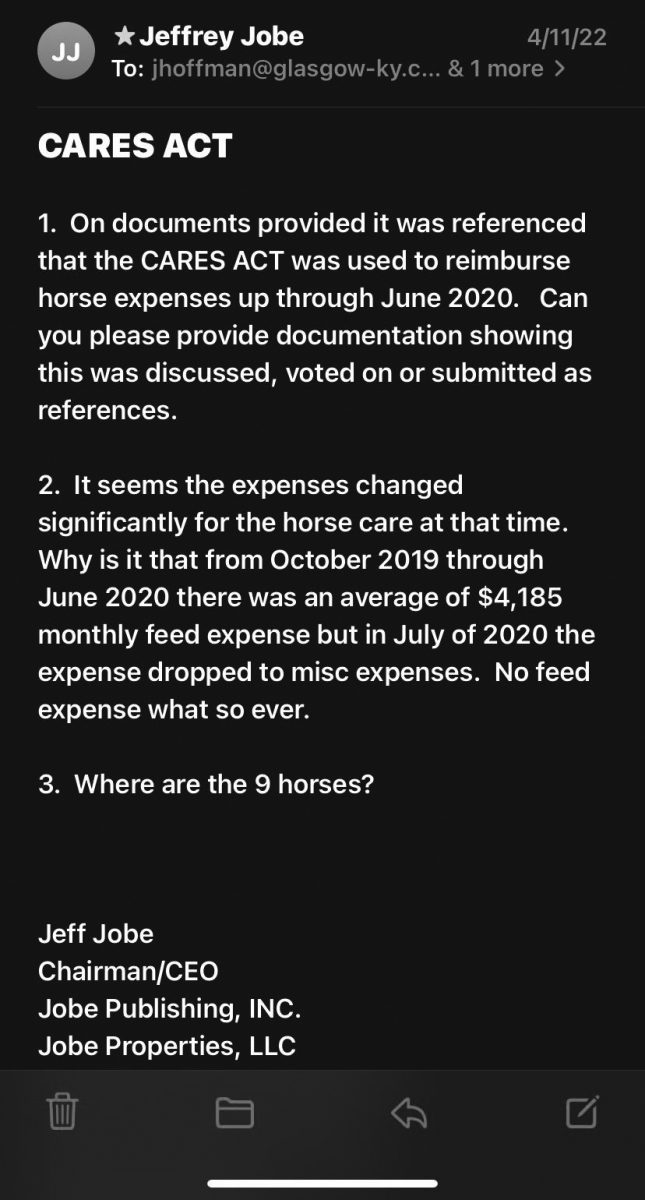 An official open record request didn’t provide answers to the location of one of the horses. It has been at Hales home for what is estimated at a year. 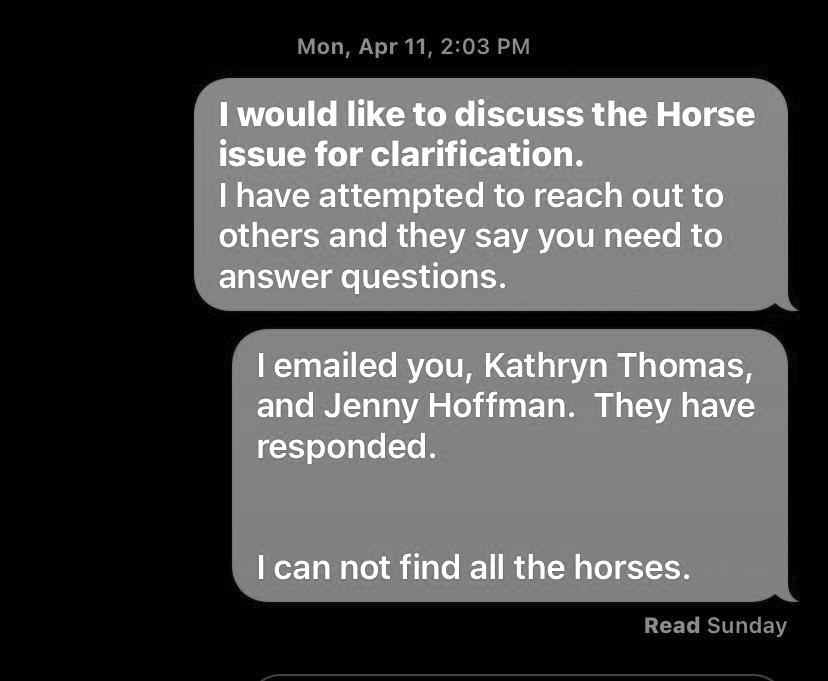 Another texting attempt to get Hale to acknowledge where the nine horses were located. He did not want the magistrates or the paper to know he had a horse at his home. 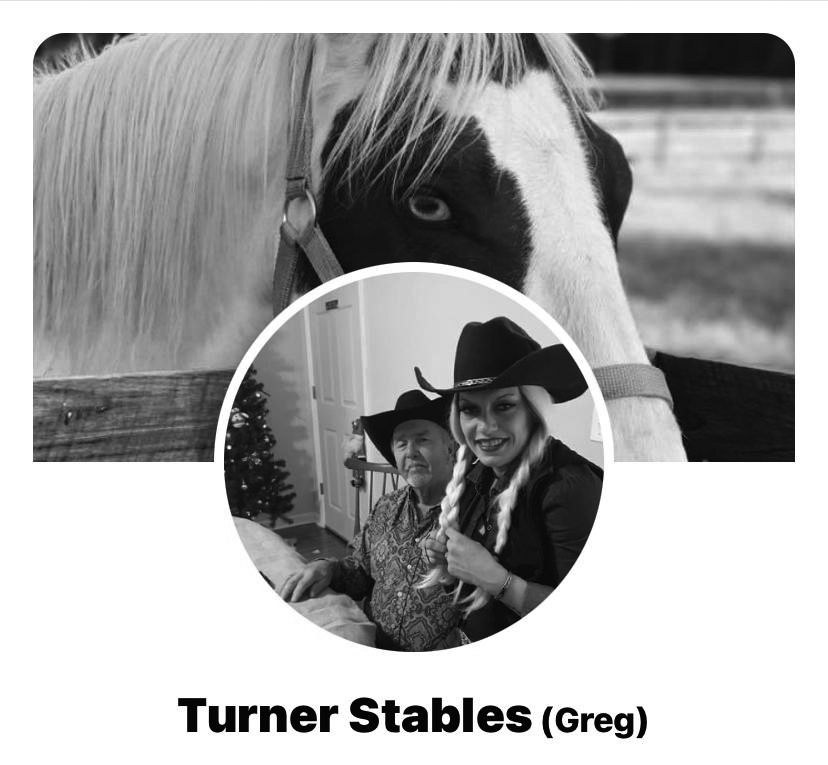 The owner Greg Turner had five state park contracts for riding stables in September 2019. He had a manager who quit 3 days without him being notified. He has receipt where a local Vet treated the sick horse for an illness coming from being exposed to opossum excrement. He said, “Because of the court delay they tried to charge me $32,000 to pay for their care. This is crazy, I have rented an entire farm for $400 a month in that county. I went to court several times, the offer was made to take the horses, and me plead guilty. I did it to get behind me. But I love horses, I have done this my entire life and the horses they got were good horses. The one they put down was sick and a local veterinarian knows it.” He still runs riding stables at the four other state parks and will use this experience to have more backup and routine visits. 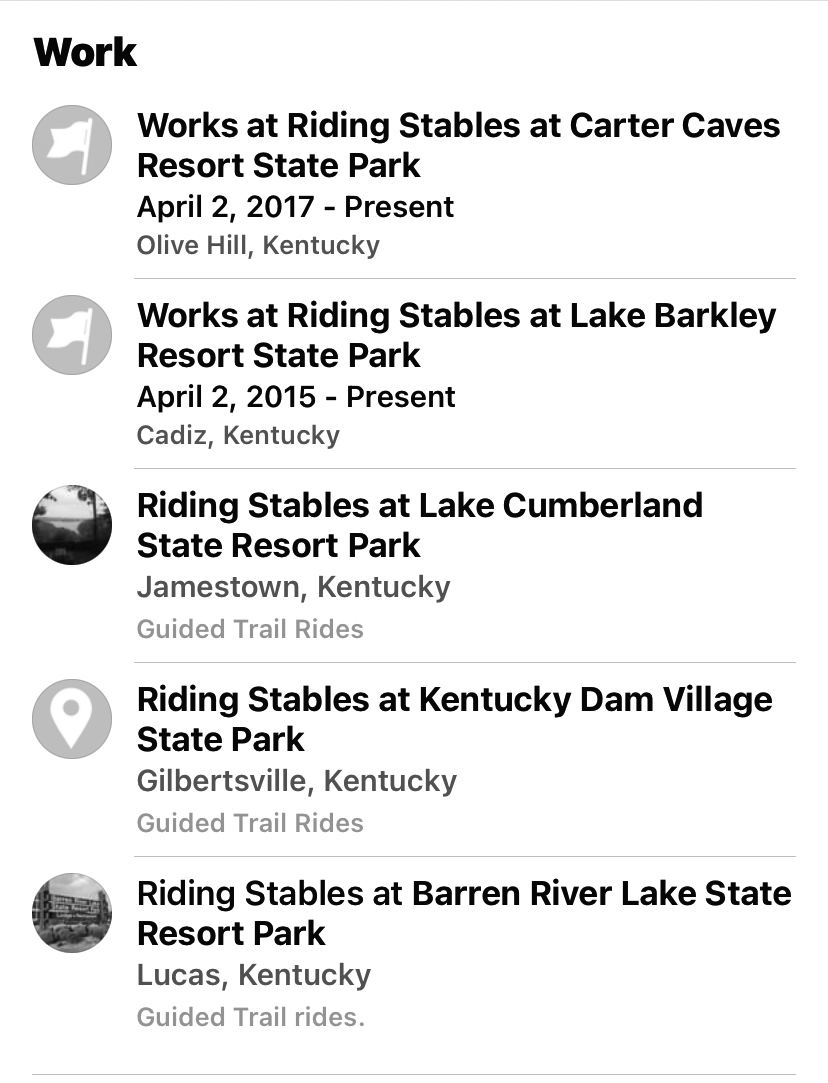