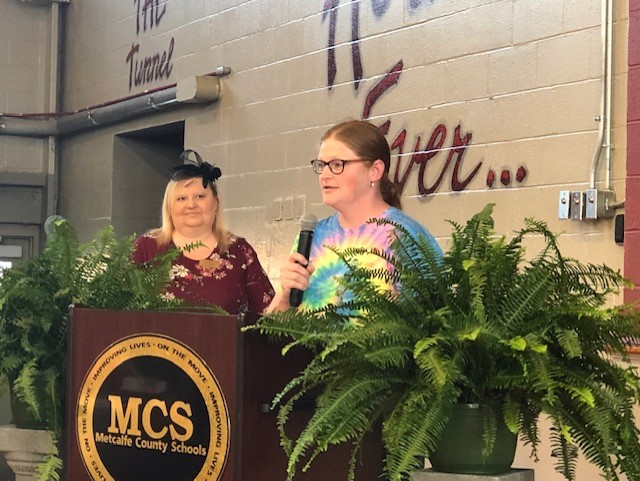 Business of the Quarter was presented to Becca Neal of Tropical Breeze Shaved Ice and Snack Shack. Chamber President Torrie Osbon looks on as Becca speaks to the crowd. Photo by PJ Martin

Friday morning, April 22nd, the Edmonton-Metcalfe County Chamber of Commerce held its first quarterly breakfast of the year at the old school gym.

The ‘State of the Commonwealth’ was the theme of the breakfast with guest speakers presenting information on the state, county, city, and school system.

The Neal family has recently suffered a tragic loss due to fire and she stated, “Everyone has been so kind and helpful.” She also thanked the chamber for the award.

Next, 16th District Senator Max Wise spoke about the redistricting that took place in January plus other legislation this past session. “This job does not define who I am. I’m a Christian, and I’m a husband, I’m a father of 4 children…“I’m going to listen to you and I’m going to represent the values that I know represent Metcalfe County…”

“We tackled a lot of big issues also this session….issues that involve education, also social issues. I sponsored the 15-week abortion ban, I’m 100% pro-life…also pro 2nd amendment. Another thing we did this session was also to make sure that we saved women’s sports…I believe the sports in Kentucky are boys will play boys sports and girls will play girls sports. Wise added that he was happy to override that Governor’s veto. He ended by offering his cell number to anyone to call about any issue.

Representative Bart Rowland spoke next about the budget noting that state employees and social workers were given much-needed raises and the state police were given a $15,000 raise. “Infrastructure funding, transportation budget, are always important. Metcalfe County is going to get approximately 5 million dollars for projects right here in Metcalfe County….All in all, I think it was a last really successful session for my last session. I think we’re going to do some things that will move the state forward and make Kentucky a better place to live, work, and raise a family.”

Next, Mayor Doug Smith spoke of the current water project and noted that the Edmonton Memorial Park was awarded the Land and Water Conservation Grant this past year. “This grant will supply funds to replace concrete under and shade over all baseball, softball, and tennis court bleachers, and additional trash cans throughout the park.”

“We are currently in the beginning phase of the Edmonton Memorial park improvement project that will include the reconstruction of the Mosby Ridge Bridge, at the entrance to the park along with a walking trail, a splash pad, and constructing a multipurpose building with an amphitheater.”

Judge/Executive Harold Stilts spoke next, thanking Representative Rowland and Senators Givens and Wise for assisting Metcalfe County with grants such as the $369,000 to improve the water system. “They were also instrumental in helping to secure a federal grant for Bowling Park for a new pantry. Also, we was able to secure a $120,000 grant for utility bills that was for those that experienced cut-offs and disconnects during the pandemic.”

He also mentioned future work at the 68/80 intersection, known as ‘the Y’. It will be restructured to make it safer for the traffic.

The last speakers were members of the MCHS Student Ambassador Program, Racheal Ervin and Coleman Bowling.

The delicious breakfast was catered by Diane’s Cakes and Catering and sponsored by Wall Works who also donated door prizes. 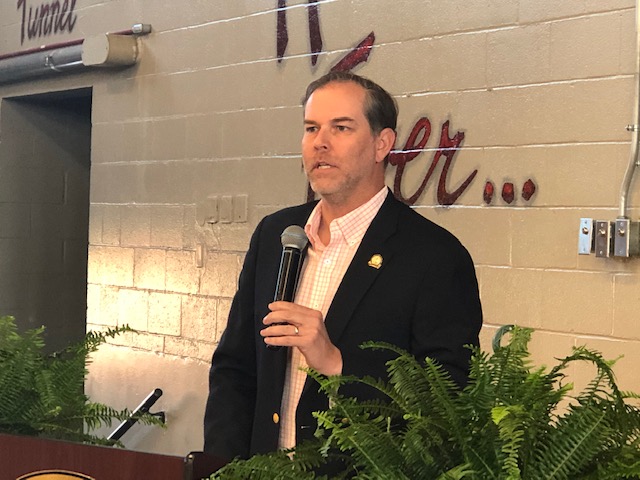 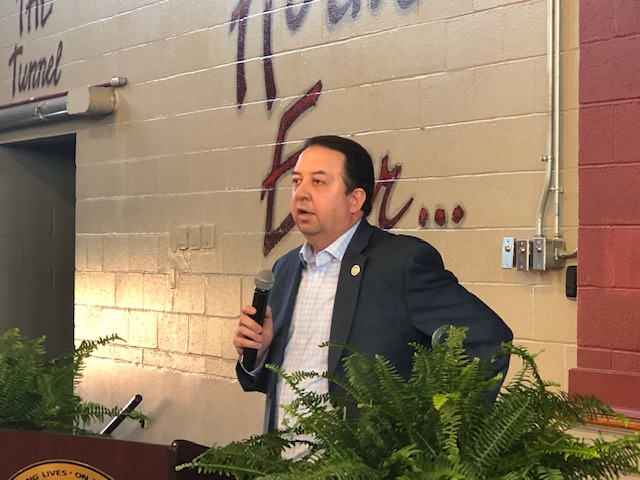