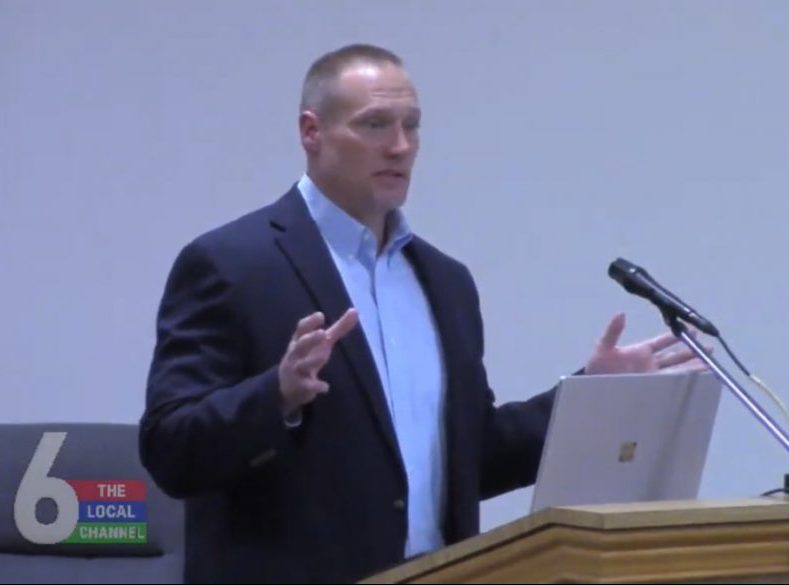 Scott Young, General Manager of Glasgow Water Company, gave an annual utility presentation Monday night to the city council, which will also be his last before leaving GWC. His message included many accomplishments, projects, and goals. Young also warned of challenging times ahead in a post-pandemic world.

During his 16-year tenure with GWC, Young has managed to facilitate multimillion dollars’ worth of capital improvements to the local water company with another $3.5-million budget for the current fiscal year.

“One of the things I’m most proud of over the 16 years that I’ve been at the Glasgow Water Company is that we are approaching $48-million of work of capital improvement projects within our system,” Young said, “And for a utility our size and a customer base of our size that is extremely—I’m just proud of that.”

“We’ve had significant growth in our sanitary sewer system,” Young said while providing a chart that showed consistent growth over the past 17-years.

Young said one of the goals for the company is to continue branching out into unincorporated areas of the community with sanitary sewer services.

He also discussed other major accomplishments including the historical manhole that would overflow for days following large rain events leaving a flooded area at Gorin Park.

That project led to a total of 21 identified sewer overflows around the district to stop the water overflowing in the associated areas. The project came with a $19-million cost but included other updates and improvements as well.

Young said the “real workhouse of our system” is the 7-million gallon peak storm surge basin that allows inflow of excess waters where it is then treated and pumped back into the plant, eliminating any illicit environmental discharges.

Young advised the council that costly projects and daunting tasks are on the horizon for Glasgow due to the Environmental Protection Agency’s (EPA) Revised Lead and Copper Rule.

Using the near-decade-long water crisis in Flint, Michigan, as an example, Young explained that lead leached into their drinking water because they failed to have an adequate corrosive control plan after changing water sources to a more corrosive water.

The corrosivity, Young said, broke down the lead service lines in Flint, and part of the new guidelines set by the EPA will require every utility in America to inventory every service line to determine none are lead lines. Lead water lines may be more common across the nation than one would expect.

The issue for Glasgow is that when the city council purchased the water company from Kentucky West Utilities in 1937, no records are available to prove whether or not many of Glasgow’s 20,000+ connections are not lead pipelines, Young said.

The EPA guidelines say if you are unsure of what you have for water service lines, they have to be treated as if they are lead.

“What we think’s in the ground doesn’t get us by the EPA regulations,” Young said.

Compliance will be “extremely, extremely expensive,” he added.

He also expressed the importance of educating the public along the way. Young said there are no lead issues in Glasgow’s water that he’s aware of and that he doesn’t disagree with the new legislation per se. He firmly believes that “no kid in America should be exposed to lead in their drinking water.”

Lead is a naturally occurring element that can have some beneficial uses; however, it can be toxic to humans and animals and cause adverse health effects. Visit https://www.epa.gov/lead/learn-about-lead for more information on lead.

In addition to this costly project, GWC has already been dealing with inflation and an inability to purchase needed supplies for current projects and replacing aging infrastructure. Young said fifty-one miles of Glasgow’s sanitary sewer system is at least fifty years old. “It has exceeded its useful life; it needs replaced,” Young said, adding that GWC had already submitted related concerns to the Glasgow Water and Sewer Commission roughly seven to eight years ago. Young said GWC has since developed a plan for this matter.

Young said GWC received a $1.6-million grant for the next section of their transmission line project, but that project is now $2-million dollars more than the original estimate given pre-pandemic.

The nation is currently experiencing proliferating inflation causing the costs of almost everything to rise rapidly while simultaneously dealing with supply and demand issues.

The inflation costs also affect GWC’s operation expenses substantially. For example, chlorine gas previously cost $300 per ton before the COVID-19 pandemic, and last month, Young said, cost $1,400 per ton. This is only one of many chemicals used to treat our water.

“These are obstacles we’re going to have to overcome and figure out because the thing we can’t do as a community is set here and become complacent and not do anything,” Young told the council.

With all the extra costs to operate and the impending projects to be compliant with new federal guidelines, it may be that GWC customers will see rate increases.

That being said, Young said GWC customers pay some of the lowest water and sewer costs in the state. In fact, according to the 2018 Kentucky Water and Sewer Utilities Survey (their most recent available survey), the state average cost for 5,000 gallons of water was $39.75. To compare, Glasgow city and Barren county water rates in 2018 were $18.83 and $25.12, respectively.

Young said due to the COVID-19 pandemic, the usual-two year survey has not been updated so he provided some comparable utility rates for 2,000-gallon usage across the region obtained by GWC. See corresponding comparison lists printed with this story. 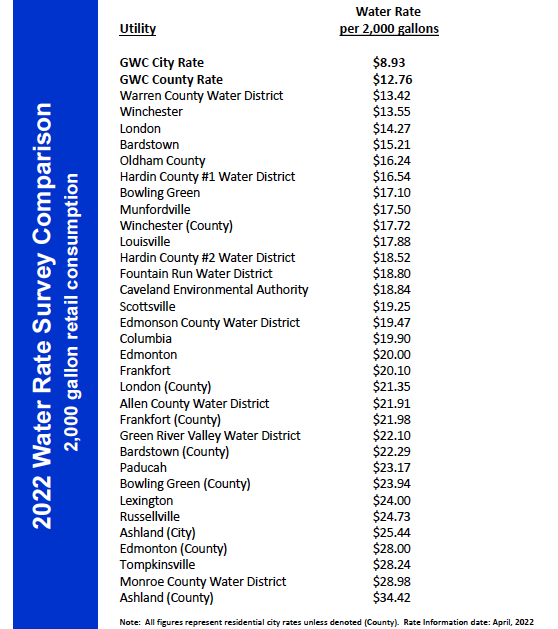 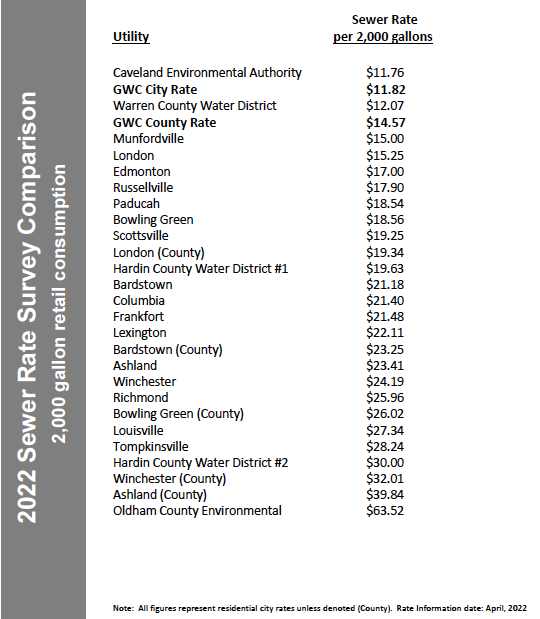 A related ordinance passed by the Glasgow City Council in 2015 expired in August last year. That ordinance, Young said, authorized annual increases for water and sewer rates up to 3% per year for five years. He said during that five-year period, rates were only raised twice.

From a fiduciary standpoint, “our commission and employees have done a really good job of trying to keep low and affordable rates to customers,” Young said.

Young’s annual department presentation will be his last to the Glasgow City Council. Young was selected to be the next Executive Director of the Kentucky Rural Water Association.

Joe Watson will replace Young as the General Manager at GWC on July 1.

Before ending, Young personally thanked both the current and past Glasgow council members.

“I have had tremendous success with this legislative body and I feel like we’ve done some really good things—so thank you,” Young concluded.

Out of 435 water utilities in the Commonwealth, GWC is the 10th largest based on total annual volume produced. Totaling 20,138 customers, GWC is the 12th largest utility for customer connections in Kentucky. GWC serves customers in Glasgow/Barren as well as customers in Allen and Edmonson counties.

The wastewater treatment operations provided by GWC treats and distributes over 3.1 billion gallons of water annually and has roughly 7,300 sewer connections.

As for the wastewater operations, GWC treats over 1.1-billion gallons annually.