The Office of Attorney General recently opined that the City of Glasgow violated the Open Meetings Act after a local media outlet, WCLU News, requested such opinion following a closed meeting and untimely complaint response.

The Barren County Progress reported on the city council meeting held on March 14, 2022. The agenda stated Wes Simpson would be giving a “presentation of the design-build proposal for the downtown park” and no plans were listed for any closed sessions.

Simpson is the Chairman of the Downtown Park Steering Committee and leading the project. He told the council he was “bringing back some findings for the city council to look at” but that the committee’s legal counsel, Jason Halligan, recommended they enter into a closed session for discussion. Simpson pointed out that Halligan is an attorney hired by the city.

Simpson cited KRS 61.810(1)(g), which is a provision embedded in exceptions to open meetings. Simpson followed by stating, “that discussions of the specific design proposal, pricing, all those different things should be done in executive session.” 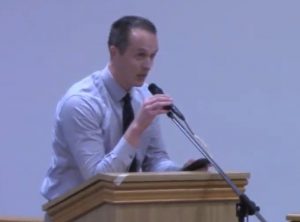 Chairman of the Downtown Steering Committee, Wes Simpson, told the council in the March 14th meeting that upon the recommendations of the committee’s legal counsel a closed session would be needed regarding the downtown park project. Photo/ Glasgow EPB video

Following what appeared to be a short hesitation between City Attorney Danny Basil and Mayor Harold Armstrong, which WCLU noted as well, the council voted and then moved into a closed session.

However, the actual exempting provision states, “Discussions between a public agency and a representative of a business entity and discussions concerning a specific proposal, if open discussions would jeopardize the siting, retention, expansion, or upgrading of the business.”

Upon their return to the open meeting, Armstrong announced the closed session “was to look at some information about the downtown park” and reported the previously planned amphitheater would no longer be a part of the project going forward. The closed session lasted about an hour and no actions were taken.

In WCLU’s recent published report over the matter, written by Brennan Crain, a complaint was filed with Mayor Armstrong after discovering the violation for closed session the day after the meeting, March 15. However, Crain explained in the article, “A public agency has three business days to respond to a complaint like the one submitted by WCLU News, Glasgow responded within four days.”

The attorney general’s opinion revealed this was a violation in itself.

The city received one bid for the park project from Scott, Murphy, & Daniel Construction in November 2021, and Crain revealed WCLU received a copy through an open records request. He further stated that “city officials continued to assert they had a basis for the closed session away from the public” despite the document being shared with WCLU last November.

Crain wrote that the response from the City of Glasgow stated they were unaware the record was provided to WCLU, calling it “a mistake” and requested for plans to be kept confidential. He further explained in a letter that City Attorney Danny Basil sent to the attorney general’s office revealed the construction plans weren’t given to anyone else in the public.

BCP reviewed the opinion from the attorney general’s office from WCLU’s hyperlink embedded in their article.

The attorney general’s opinion consistently maintains that the city did not correctly apply the KRS law they continued to use as a basis for the closed session.

Crain explained regarding the closed session:

“The law invoked by the city enables a closed session when it might threaten the “siting, retention, expansion, or upgrading of the business,” and that the “attorney general reasoned the site of the project is known – downtown Glasgow – and the construction company will simply build the park, not operate it. Because of these facts, the office concluded the city did not meet its ‘burden” to justify that the project’s siting or expansion and upgrade might be threatened if an open session were held.”

The opinion also said there is no evidence, at this time, that any bidding processes will be reopened, Crain wrote.

WCLU also explained another set of laws to govern the bidding process, the Model Procurement Code, which requires the presence of an offeror when a public agency discusses such a matter in a closed session. In the meeting, no indication was given whether a representative from Scott, Murphy & Daniel would be present and WCLU’s opinion request says the laws were not invoked correctly.

Crain wrote and the opinion states that, “[T]he City violated the Act when it discussed public business in closed session when no exception to the Act authorized those specific discussions to be conducted in closed session.”

After the Glasgow City Council voted to enter into a closed session that later resulted in an open meetings law violation, they voted to suspend the rules while dispersed throughout the council chambers. Photo/ Glasgow EPB video