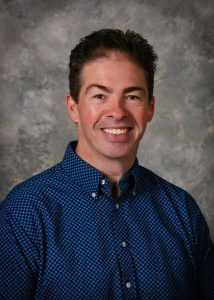 Scott is married to Charlotte Nunn Roach, and they reside in Edmonton. Charlotte is the Teacher of Deaf, Hard of Hearing, and Visually Impaired for Metcalfe County. Scott has two sons, Andrew Roach of Lexington, KY, and Aaron Poynter of Russell Springs, KY. Andrew is a Mechanical Engineer/Project Manager and will marry his fiancé, Abigail, this summer. Aaron Poynter who lives with his wife, Sara, and daughter, Reese, is the Director of-Entry Programming at the South-Central Workforce Development Board for the Cumberland River Area Development District.

Scott Roach is a third-year science teacher at Metcalfe County High School (MCHS). He has been teaching physical sciences for over sixteen years and has primarily been teaching Chemistry. He graduated from MCHS in 1985, and after working for almost ten years at Sumitomo Electric Wiring Systems, in Edmonton, he graduated from Western Kentucky University in 1997 with a Bachelor of Science in Chemistry and a minor in Biology, and then a Master’s in Education with Chemistry Emphasis in 2007. Since his high school days at his alma mater, Mr. Roach has always found the world of science most interesting. Because of his high school teacher, Mr. Wallace Williamson, he found Chemistry and Physics particularly intriguing, which is where his passion began. He recognized that interest, but it took him years to figure out that that interest would develop into a profession he was good at.

His passion is teaching the physical sciences that control the function behind so much of our everyday lives, such as the toys we play with, cooking our food, driving our vehicles, talking on our cell phones, the materials our everyday items are made of, or the movement of the weather and the universe around us. It is his goal to help young people see the world around them, as the wonder it is and to marvel at its simplicity, although seemingly complex. His gift in teaching science is being able to break down any complex topic into manageable steps that anyone willing to learn can do so, with relative ease.

He loves to see students learning and reaching that Ah-Ha moment when they have made the connections to see the simplicity of what Mr. Roach is trying to get them to learn. He is constantly trying to make his classes more interesting and engaging for students to be able to find what he is teaching can be relevant to their lives, even when they do not necessarily enjoy science. He wants students to see science all around them, and to recognize their lives would not be possible without the science involved in making their lives so much easier, even when it goes unnoticed. Mr. Roach stated, “Science is simple, although not necessarily easy; the awe and wonder come when we understand science is everywhere.”