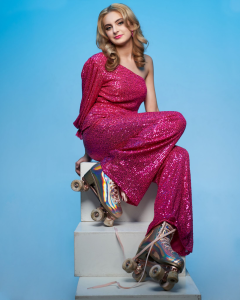 Hardyville resident and Legrande 8th grader Shelby Haynes already has a solid schedule of extra-curriculars with basketball, volleyball, cheerleading, softball, cross country, GATS (Gifted & Talented Services), 4-H, Art Club, Academic Team, and Jr. Beta. Aside from those, she has also been competing in pageants since she was eight years old.

Shelby’s mother, Bontina Haynes, initially thought it was just a phase and only let her daughter compete in local pageants.

“After COVID hit, it changed a lot, especially emotionally and mentally for a lot of children,” Bontina said. “Shelby wanted to do more pageants, so she was doing more. As parents, we watched it help her grow and build confidence, especially when it comes to interviews and public speaking.”

Within her pageant participation, Shelby supports Multiple Sclerosis Awareness for her brother, as well as mental health awareness in honor of herself and others who suffer from anxiety.

Shelby has also made Valentines for the residents at Signature Healthcare of Hart County and has made cards for foster children through Cards for Cubs, which is a 501(c)(3) charitable organization whose mission is to give hope to kids in foster care and bring awareness to the foster care system.

“She loves giving back to the community and helping others,” Bontina said. “Pageants are not just about looking pretty. It is about the sisterhood and the bonds you make with other girls from all over, building each other up and being a role model for others.”

While holding the title of Miss Teen Derby State, Shelby will compete at Nationals next month, but that isn’t her only title.

Last fall, Shelby competed in Amerifest where she placed fourth and won best-themed photo and Kentucky Scholar. She will be competing at nationals July 15-17 in French Lick, Indiana.

Shelby has also competed in the Midwest Pageant System (MPS), where she holds the title of Kentucky Ambassador and Kentucky Cover Girl for 2022-2023.  She also won a modeling contract and will compete at MPS Nationals in July.

Miss Spectacular America’s Jr. Teen Miss US Coalfield is another title held by Shelby, and she will compete at Nationals in Bristol, Virginia in September.

Shelby’s pageant coach is Emily Campanell, who also does her hair and make-up for larger pageants, along with Danielle Mullins.  At smaller pageants, Shelby does her own makeup while her mother does her hair.

Shelby will be leaving Legrande and entering her freshman year at Hart County this coming fall.  Though she hopes to continue participating in pageants throughout high school and beyond, she also has her sights set on a future in forensic science.