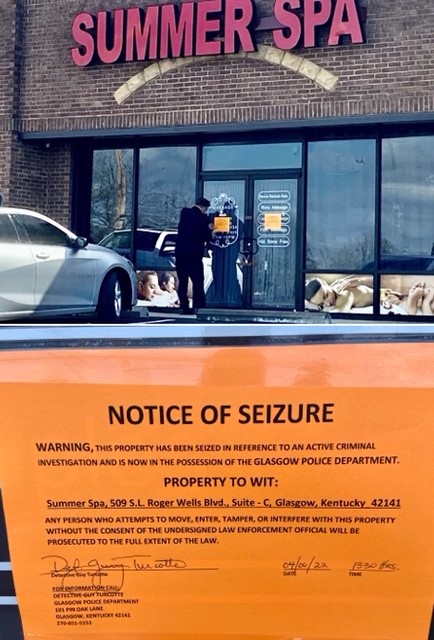 This seizure notice has been posted on the door of Summer Spa. Submitted

The Summer Spa Massage Parlor of Glasgow has been shut down following an investigation by the Glasgow Police Department (GPD).

The GPD received complaints and tips related to illegal human trafficking, promoting prostitution, providing sexual services for compensation, and operating without a license.

The investigation was conducted by Detective Guy Turcotte.

According to the citation, Undercover Detective Starnes visited the spa on April 6 and requested a massage. The owner of the spa, Jing Jing Zheng of Glasgow immediately asked for $60.

The citation states that Zheng “pointed at Starnes penis and said ‘you want this?’ While she was pumping her fist in an up and down motion.”

He refused service, and a search warrant was executed. $22,000 cash was located, and Zheng has been charged with Promoting Prostitution and Practicing Massage Therapy Without License.

The arrest was made by Detective Guy Turcotte, assisted by Officers with the Glasgow Police Department, Federal Bureau Investigations, and a Western Kentucky University Translator.

This case is still under investigation.