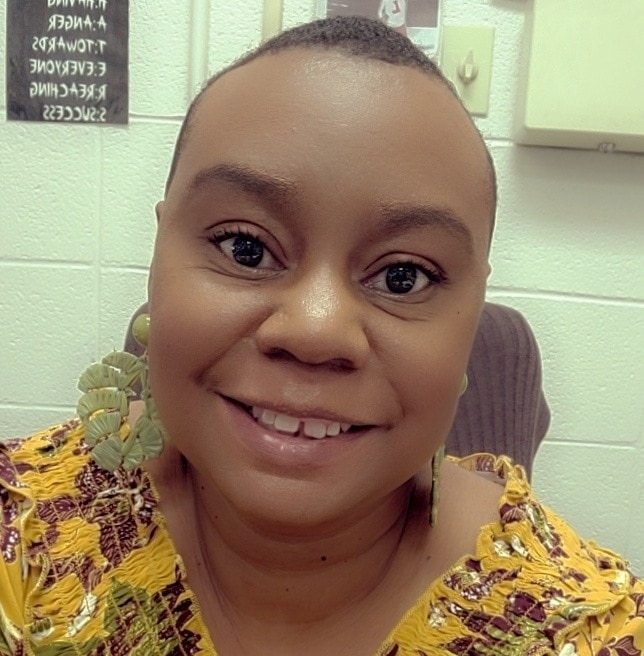 Coni Waggoner is the first African American to be promoted to full professor at SKYCTC. Photo submitted.

Southcentral Kentucky Community & Technical College (SKYCTC) prides itself not only in its successes but also in its rich history.

First established in 1939 as Western Trade School, SKYCTC was once used to train industrial workers and Armed Service personnel for the duration of World War II. Since that time, the college has greatly evolved, changing its name and also adding additional degrees and campuses to its resume.

SKYCTC’s history is continuing to evolve as well, most recently with one of its own faculty members: Coni Waggoner.

Waggoner began her employment with SKYCTC in the fall of 2009 as an adjunct and then earned full-time employment in August of 2010. At that time, she was the first full-time Reading faculty member the college hired.

“This is particularly significant to SKYCTC because it is an affirmation of the college’s commitment to diversity,” said Sherri Forester, SKYCTC Vice President of Administrative Services. “SKYCTC strives to foster an inclusive and representative faculty and staff because our diverse student population deserves to be taught by role models who share a common bond.”

In order for a faculty member to reach the rank of Professor, he or she must have a culmination of at least 12 years of instructional excellence, leadership, and service to SKYCTC communities.

“Rising to the rank of full Professor takes years of hard work and determination,” said Dr. Lisa Hunt, Dean of Academic Services at SKYCTC. “Ms. Waggoner’s promotion to Professor required serving in local and state leadership roles, receiving exceptional teaching reviews from supervisors and students, and includes a long history of service to SKYCTC and to the community.”

Part of the process in applying for and receiving the promotion included Waggoner compiling and submitting a promotion notebook.

“I had my doubts about it many times after submitting it because I kept thinking of things I didn’t include or something I could have done better. I think I had several anxiety attacks in the process,” Waggoner said. “But to receive this (promotion) is like winning an Oscar! It’s the highest level that a faculty member can achieve. It was 11 years in the making. It was certainly a goal I wanted to reach!”

Both Forester and Dr. Hunt are proud to call Waggoner a member of the SKYCTC family.

“Coni is a contributing and valuable member of the SKYCTC family and has served and led several committees since her tenure at SKYCTC,” Forester said. “…We are very excited for Coni in reaching this wonderful achievement and look forward to celebrating Coni, as well as our other faculty who have reached this milestone.”

“It is great to have Professor Waggoner as a member of the SKYCTC team” Dr. Hunt said. “She is always an encourager and a team player to coworkers and students. She has a heart for teaching. Sometimes students need a little extra help and encouragement, and Professor Waggoner is there to provide it. She works closely with students to teach and motivate them to keep reaching for their goals.”

Waggoner stated that she is both honored and humbled to receive the promotion.

“It’s one of those achievements you would like to read about in a history book later in life,” Waggoner said. “It feels like climbing the highest mountain, winning that 5K race you’ve trained for, winning the Super Bowl, or even the NBA or WNBA finals!”

Although Waggoner’s promotion has brought joy, it has also brought with it a bittersweet moment.

“I’m saddened…because my closest best friend and colleague, Gary Beagle, passed away last year, and we were going up for this promotion together because we were both hired at the same time,” Waggoner explained. “The college is still planning to honor him for Posthumous Promotion. It is certainly bittersweet getting this honor without him here.”

Waggoner’s accomplishments, humbleness, and gratitude can often be seen within the classroom. Each year, students nominate her for the Outstanding Service to Students Mentor Award. Waggoner has won the award twice. Just as she has been encouraged through her endeavors, Waggoner makes it her daily goal to share encouragement with her students as well.

“A quote that I share with my students is one of my own: ‘The reward is greater than the struggle.’” Waggoner said. “I try to encourage them that yes, college will be a challenge; yes, maybe you have been out of school for quite a while, but every sacrifice they make along the way, will be well worth it when they walk across the stage one day and get their degree. Every speed bump, detour, pothole, and dead-end street they come across on their journey is just a minor setback preparing them for a great comeback.”

Currently at SKYCTC, Waggoner is the only full-time Integrated Reading & Writing (IRW) Professor at the College. Waggoner said she grateful to have the opportunity to make a difference in others’ lives.

“I love that I have the power to impact people’s lives not only academically, but also personally,” Waggoner said. “I share stories from my own life with my students because for me, it’s important to connect with them.”

In addition to her employment opportunity, SKYCTC has also allowed for Waggoner and her son to bond through educational endeavors as well..

“My son, Asa Waggoner, graduated from SKYCTC in 2020, and I had the honor of handing him his diploma during the ceremony,” Waggoner said. “Asa has also scored some firsts in that he is the youngest and (if I’m not mistaken) the first African American GOP Chairman in Hart County. Words cannot express how proud I am of my young man.”

As for the distant future, Waggoner plans to one day write a devotional or other book. But for now she plans to continue working at SKYCTC, the place that she loves.

“I’m abundantly grateful for all of the opportunities at SKYCTC,” Waggoner said. “There are so many ways the college helps us to grow as faculty, but we have opportunities to help the community as well.”

“I also love the amazing people that I work with,” she added. “Everyone is so down-to-earth and willing to assist you with anything. I work with a very talented group of people and the administration at the college is top notch.”

For more information about SKYCTC, visit the college’s website at www.southcentral.kctcs.edu. 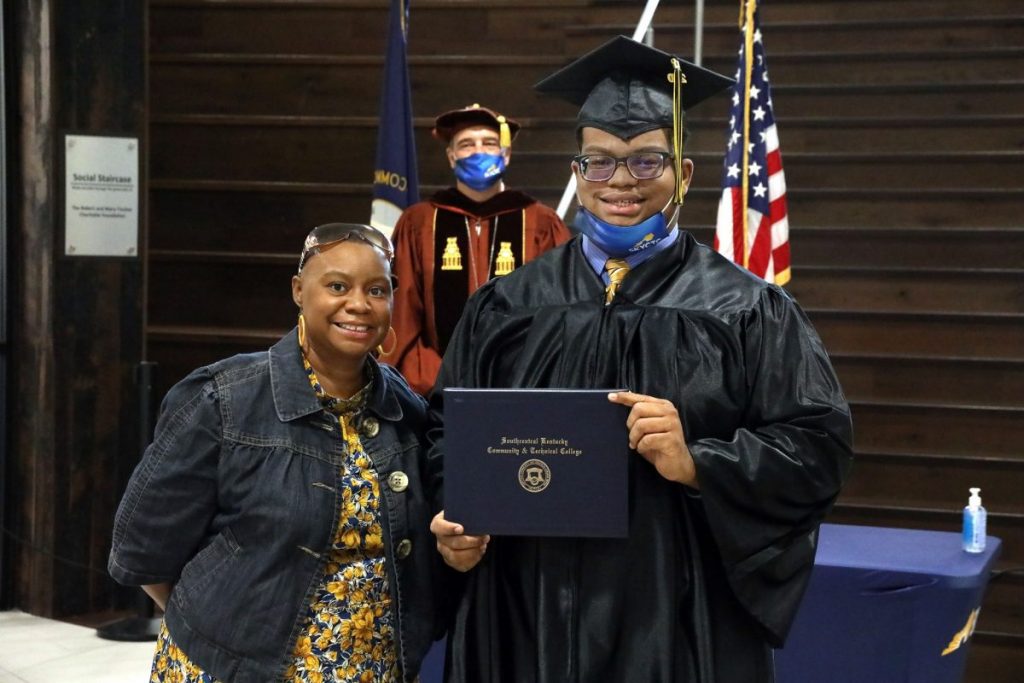 Coni Waggoner, left, is proud of her son Asa Waggoner, who graduated from SKYCTC in 2020. Photo submitted. 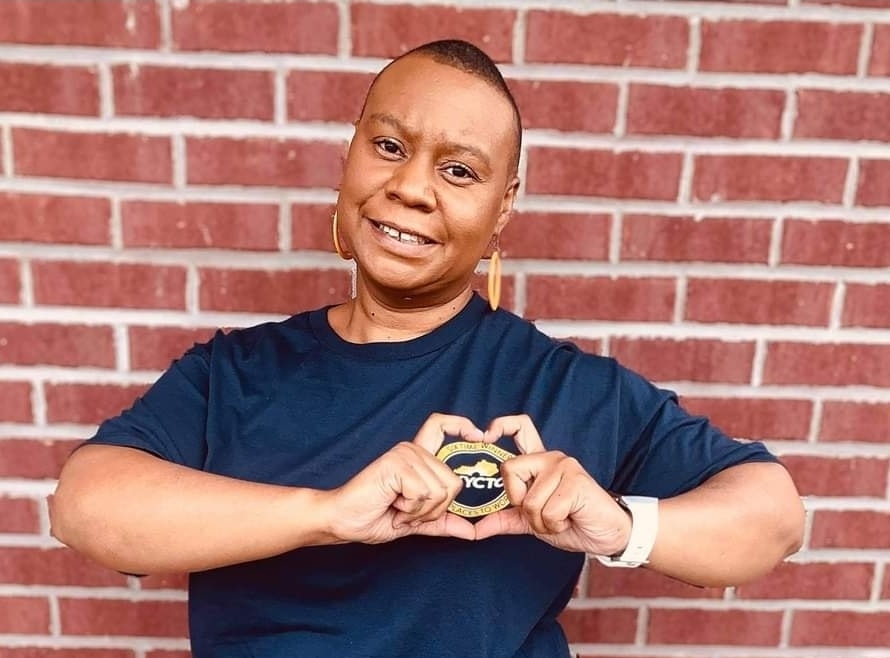 Coni Waggoner has been employed at SKYCTC for over 11 years. Photo submitted.