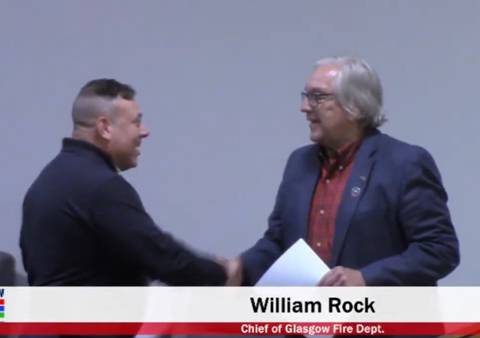 The Glasgow Fire Department has a new chief for the department. William Rock was sworn in and took his oath as chief with Glasgow Mayor Harold M.D. Armstrong in the March 28th city council meeting before any business items were addressed.

Fire Chief Rock was the Assistant Fire Chief before acting interim chief after the retirement of his predecessor last summer, Dereck Rogers.

City council members voted to approve the first reading of an ordinance establishing the acceptance of Montessori Way into the city’s street maintenance system. The official acceptance of the paved street is 583-feet in length and 24-feet wide. It also includes a 50-foot cul-de-sac with a 60-foot right-of-way.

Initially, the ordinance states, there were deficiencies in the proposed roadway that listed the measurements at 22-feet wide instead of the required 24-feet. Corrections were made and filed through the appropriate channels before Dept. of Public Works Superintendent Roger Simmons confirmed inspection and compliance for the necessary requirements. The second reading is expected at the next scheduled council meeting.

The council passed two resolutions at the request of the Barren River Area Development District (BRADD).

The first resolution pertained to a hazard mitigation plan under the Disaster Mitigation Act of 2000. Under this act, Federal Emergency Management Agency (FEMA) requires local jurisdictions to have a plan in place as a condition of receiving certain future federal funding in the event of damage caused by natural disasters. This is not for disaster response funding, but instead, for funding that may be advantageous for projects after a disaster, such as tornado safe rooms.

The resolution solidifies that the mitigation plan developed by BRADD is accepted as the official “Hazard Mitigation Plan” of Glasgow, gives BRADD the responsibility and authority to develop any warranted addendums, appoints BRADD Regional Economic Development Committee to review the plan and any adjustments needed to be presented to the Barren County Steering Committee and Glasgow City Council for consideration.

Additionally, the council also passed the second resolution for a strategic plan to implement identified goals and objectives over the next five years. That plan, developed by the local Steering Committee in partnership with BRADD, was adopted and designates the current steering committee as responsible entities in guiding the implementation of the plan.

Emily Hathcock with BRADD explained to the counsel that the mitigation plan’s objectives allow eligibility for the city to apply for FEMA mitigation funding and without it, certain funding would not be available to receive.

“It’s a gateway to get there,” Hathcock said, basically a “no plan, no money” situation for certain funding.

However, the county strategic plan gives a back up for other objectives that aren’t FEMA related.

The strategic plan “gives you a leverage point to say hey as a local committee and a community, we’ve decided this is important to us and we have a plan that says this is important to our citizens—it kind of helps you to have that back up for your grant application,” Hathcock explained.

She also explained that the objectives on the plan are not considered requirements, but rather “a citizen put together of goals and activities that they would like to see done over the next five years.” She said the steering committee is open to anyone to attend.

Both the strategic plan and the hazard mitigation plan can be viewed in full at: planning.bradd.org and hazards.bradd.org.

– Resolution for the city to apply for a recycling grant with the Kentucky Pride Fund for recycling equipment—the grant amount totals $69,900 with Glasgow’s match of $17,475 for a total project amount of $87,375;

– Resolution to apply for a Kentucky League of Cities Insurance Services Compensation Safety Grant for the purpose of personal protective equipment for the Glasgow Fire Dept., Public Works, Police Dept., and Parks and Recreation, and for a 2022 KLC Risk and Safety Conference—the grant amount is $3,000 with a city match of $3,000.

– Resolution authorizing a mowing agreement between Billy Carver and the City of Glasgow for the local landfill at Carver’s expense in exchange for any hay he may be able to gather from the mowing.

The next city council meeting is scheduled for Monday, April 11 at 7:00 PM in the City Hall Council Chambers. 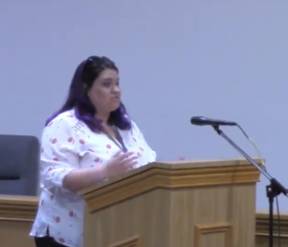