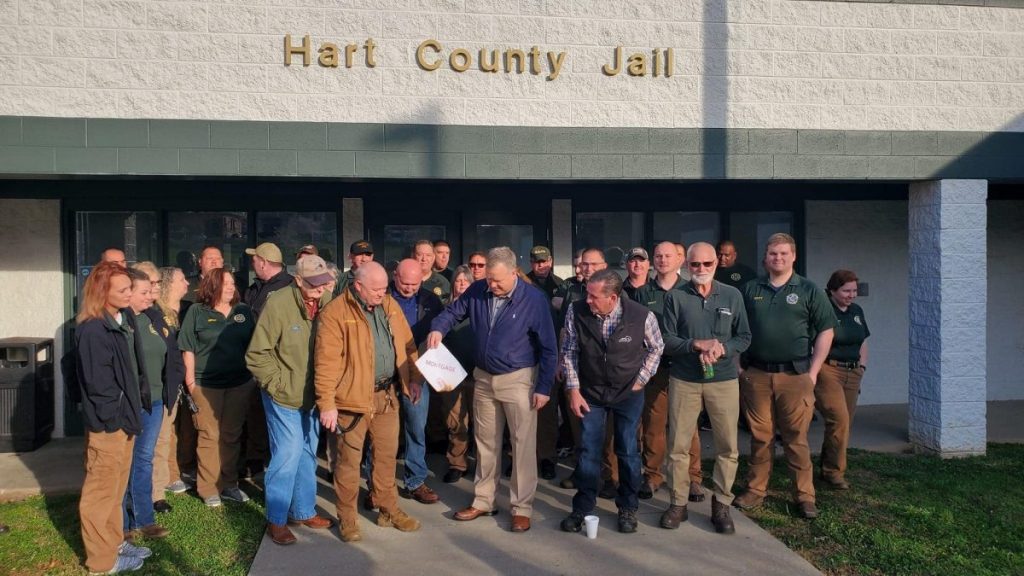 Next, Judge/Executive Joe Choate spoke on the note burning held before the meeting.

At 8 a.m., a note burning was held at the Hart County Jail. The event was to celebrate the jail being paid off five years early. For the event, Fiscal Court members and employees of the jail gathered at the jail. Judge Choate and Jailer Israel Bergenson held up a mock mortgage, which Jailer Bergenson then set aflame. Judge Choate said that by paying off the jail five years early, the county had saved over $225,000 of interest alone.

“…With the court and with Israel and the leadership, we made it happen, but the biggest thing was his employees, you know the jail staff and their dedication to the county and what they do,” Choate elaborated. “We’re just very blessed, and it it’s a really special day…”

At the note burning, Bergenson also expressed appreciation for the previous jailers, William Cartmill and Keith Riordan, who hired some of the deputies that are still with him today. “So when you take the three jailers that’s been here, you take all of their top people and put em’ together, that’s what gets us to where we’re at today. I appreciate each and every one of ‘em…” he said.

Bergenson gave the jail report during the fiscal court meeting, stating that the total population of inmates was 195. The total number of paying inmates was 152. There were 42 class Ds, 40 class Cs, 2 alternative sentence, 12 controlled intake, 4 parole violators, and 14 prisoner transports. The total included 37 Edmonson County inmates and 44 Hart County inmates.

Other items approved during the Fiscal Court meeting included:

The next fiscal court meeting will be held Thursday, April 7, 2022, at 9 a.m. on the second floor of the Hart County Courthouse.