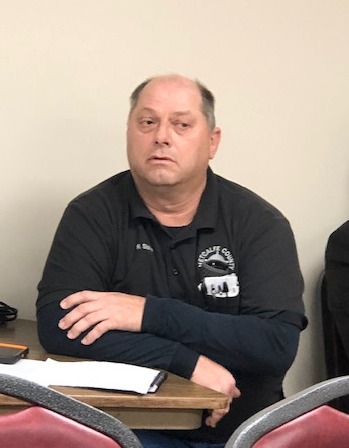 Jailer Randall Shive expressed his concern to the court. Photo by PJ Martin

The Metcalfe County Fiscal Court met in regular session on Tuesday, March 22nd with all in attendance except for County Attorney Barry Gilley.

The first order of business was the 1st reading of the 2022-2023 Jail Budget. Jailer Randall Shive spoke up stating, “I don’t agree…I’m gonna ask em not to pass this budget…I’ve had no input whatsoever. KRS 441.215 states that the County Judge/Executive, the County Treasurer, and the County Jailer shall prepare and submit it to the fiscal court. I don’t agree with this 5% that y’all want to give us.”

Shive explained that was for the CPI rate but, “as far as this salary increase, I don’t agree with it. Y’all want to give us 5% to last us for 4 years. I’m asking that you raise the transportation officer and the deputy transport officer to $800 a month.”

Stilts noted that this was discussed at the last budget meeting and the consensus of the court was to go 5% across the board with all county employees for a cost of living increase. Adding that inflation has gone up, but the county is not getting any extra revenue.

Stilts replied, “All I can say is if you was unhappy with the job, why is your name on the ballot again?”

He then asked if any of the court members had any comments or concerns. It was explained that the first reading could be approved and any changes could be made if needed before the second reading occurred.

Sheriff Lonnie Hodges addressed the court with the option of leasing three vehicles for the department and one for the jailer in a 2-year lease program with Don Franklin. The court then approved taking bids on the 4 surplus vehicles being replaced.

Emergency Manger Emory Kidd asked for the approval signature of the SAR Grant agreement for the North Metcalfe Rescue Squad. The grant amount of $6,157 will be used to purchase water rescue equipment. The court approved the grant.

The court approved negotiations with Barren County for the maintenance of a .2 mile of Guy Young Road, the inter-fund transfers, and claims.