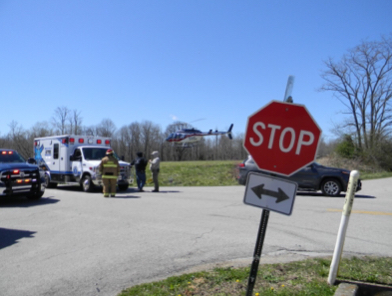 Three were injured over the weekend as a result of a two car collision in the north end of the county.

On Saturday, March 26 just after noon, the Metcalfe County Sheriff’s Office was notified of a two-vehicle injury collision with entrapment at the intersection of KY 314 and Ratliff Mitchell Road in the Savoyard community.

Preliminary information indicates that Tasha R. Cross was operating a 2013 Kia Forte northbound on Ratliff Mitchell Road when she failed to recognize the stop sign and stop at the intersection of KY 314. Cross’s vehicle then traveled directly into the path of a 2018 Chevy Silverado that was traveling eastbound on KY 314. The Silverado was operated by Eddie L. Garmon. The two vehicles collided in the intersection. The Kia Forte came to final rest off the eastbound shoulder of KY 314. The Silverado came to final rest in westbound lane of KY314. Cross was then mechanically extracted from her vehicle and transported via air ambulance to Tristar Skyline Medical Center, Nashville, TN, where she was admitted for injuries. Two passengers inside Cross’ vehicle were transported via ambulance to TJ Samson Community Hospital, Glasgow, KY, where they were treated and released for minor injuries. Garmon refused medical treatment at the scene.

Alcohol was not a factor in this collision. Seatbelts were in use at the time of the collision.

This collision remains under investigation by Sheriff Lonnie Hodges.  Sheriff Hodges was assisted at the scene by Constable Josh Cole, the North-Metcalfe VFD, the Hiseville VFD, Barren-Metcalfe EMS, and Air Methods Air Ambulance.