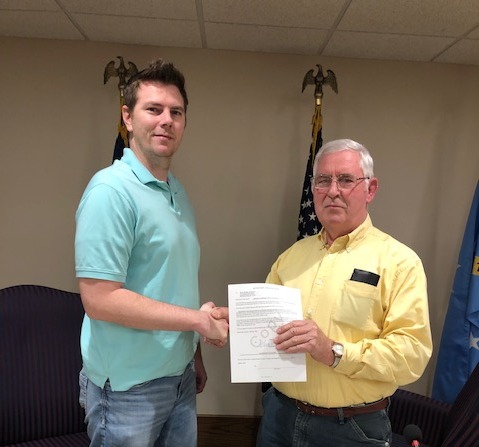 Chad Pennington and J/E Harold Stilts shook hands after the approval of the bid. Photo by PJ Martin

Metcalfe County Fiscal Court called a special meeting on Thursday evening with only one item on the agenda, the bids for the IDA Spec building fit-up for Pennington Stave and Cooperage.

The bid received from Scott, Murphy, and Daniel of Bowling Green was approved unanimously by magistrates Ronnie Miller, Kenny Scott, and Donnie Smith. Kevin Crain was unable to attend the last-minute meeting due to a conflicting meeting.

The bid in the amount of $1,945,124 (one million, nine hundred forty-five thousand, and one hundred twenty-four dollars) encompasses the addition of plumbing and electricity to the building, plus restrooms construction, pouring the concrete floor, and adding entry doors.

The approved bid form was forwarded to the engineers and BRADD so that a pre-construction meeting can be scheduled before work begins.

Chad Pennington was in attendance and stated, “I can have the equipment ready…as soon as the building is ready.” Adding that, “the demand for barrels is going crazy right now.”

According to Pennington, the first stage of the business will be cutting staves to use in barrel making and the equipment that will be used is all new and made in Central City.

Magistrate Kenny Scott asked. “Are you going to be trying to buy lumber and timber from local people?”

“Absolutely, anything we can get local,” Pennington replied. The lumber that will be used is white oak.