Black vulture on the left and a turkey vulture on the right. Notice the difference in head color and feather color between the two birds. Photo source: University of Kentucky College of Agriculture, Food, and Environment/Department of Forestry and Natural Resources website.

Nearly every day when Sue Thomas looks out her window, she sees them.

They are often perched on house roofs or settled in a nearby tree – watching, waiting.

“It’s awful. You can’t even walk out,” Thomas said. “We can’t let our animals out of a day time. They swoop down and try to get them. They even swoop down on my front porch.”

There are dozens and sometimes hundreds of black vultures circling above the subdivision where Thomas resides in Horse Cave. And, unfortunately for Thomas, the birds have taken roost in and around her home, which is located on the first street behind Gada’s Beauty Salon.

“These things are so tall. They’re so big,” Thomas said. “They’ll come up to your knees or higher. One was in my flower bed, and when I scared it, I reckon when I was going down (the porch steps), its wings came way out. When its wings are out, it’s at least a six-foot span, I would say.”

In the case of Thomas and her neighbors, black vultures are what have taken roost around their homes.

“When I bought the house, I didn’t know they were having the trouble over here (with vultures). They didn’t tell me anything about it,” Thomas said. “…When I first moved in here, I kept hearing something on my roof…And when I went out, they (the vultures) were lined all the way over my house and the next door, too. You could hear them walking on the roof. It scares you to death. I won’t go out.”

According to the Kentucky Department of Fish and Wildlife Resources (KDFWR), black vultures are considered more “social” than turkey vultures, often roosting in large groups near active food sources. They tend to roost in high trees or structures, and sometimes these roosts can be located in inconvenient areas like houses.

Jimmy Martin, Supervisor of the Horse Cave City Public Works Department, stated that the vultures tend to stay around the east side of town.

“I think it’s because their roost was up on top of the hill next to the quarry, and they would fly back down in this area of town near the cemetery and roost back and forth,” Martin said. “When we’d run them off, they’d go up there, and then in a matter of days, they’d come back…I’d say it’s probably a couple hundred of them anyway. It’s a pretty good size roost…It’s been an ongoing issue for sure.”

An ongoing issue, Thomas said, that needs to be solved immediately.

“It’s a health issue, too,” Thomas said. “…I have grandkids and great-grandkids here, and it’s a health hazard. It (vulture droppings) runs down off the side of my deck…It’s a mess over here. It’s dangerous.”

Because of their highly adapted digestive and immune systems, vultures are often called “nature’s garbage disposals” and feast on dead and diseased animal carcasses. Turkey vultures generally do not take live prey and typically only feed on animals that are already deceased. However, both across the state and locally, there have been several reports of black vultures preying on live animals, including newborn calves. Vultures tend to feed on the softest tissues first, including eyes, tongues, and hindquarters.

But regardless of how big of a nuisance the vultures are causing for homeowners and farmers in the area, both turkey vultures and black vultures are protected by federal law. It is illegal to kill a vulture unless a permit is granted.

Even so, it is legal to harass vultures away from roosting areas. Loud noises or other disturbances such as setting off “cannons” may cause the birds to become uncomfortable and choose a new roost. Pyrotechnics can also be used as a scare tactic towards the vultures.

But according to Thomas’ recollections, nothing has been done to alleviate the vulture problem in the area.

“We can’t even get the mayor (Randall Curry) to come over here to even look at it,” Thomas said. “…He (Jimmy Martin) told me they were going to try to get the things (cannons) to put them off. Nope. Has never been nothing…They didn’t apply for it (a permit). They were supposed to…I’ve checked into this.”

However, Martin stated that the City of Horse Cave has, in fact, exhausted every means possible to rid the area of the vultures.

“We got a permit out of Georgia, actually, from the Department of Fish & Wildlife in Georgia (where the Department of Migratory Birds is located), and they did grant the permit the first year,” Martin said. “We did take some of them out and made it a smaller group, but it didn’t seem to help. They came back…They had told us to hang one up and that would deter them from coming back and that kind of thing…We tried all that stuff and it didn’t really work, honestly.”

Martin stated that they also tried the loud noise of the cannons, but that wasn’t helpful either.

According to Martin, there has to be a certain length of time before the City of Horse Cave can be granted another permit to kill additional vultures or destroy roosts.

“We reapplied last year (for the permit), and we got information back that it hadn’t been long enough since we did it the first time to be able to do it again,” Martin explained. “We’re gonna have to wait a period of time…There’s not a whole lot other than the cannons and shooting them that we can do, so that’s kind of where we’re at right now is just trying to figure out what to do with them.”

As stated on the KDFWR website,”If black vulture attacks on livestock are documented, landowners can apply for a permit to reduce the black vulture population on their farms (fee required). The permit is issued by the USFWS, but in order to start the application process, landowners should contact the USDA Wildlife Services at 502-254-1592…Take photos of the damage whenever possible to accompany the application.”

Sub-permits are also available through Kentucky Farm Bureau (KFB) at no cost. These permits are available to farmers who are experiencing problems with vultures attacking livestock. There is a five vulture limit that can be taken via these sub-permits. Livestock farmers may request a KFB sub-permit application by emailing Joe Cain at joe.cain@kyfb.com or by calling 502-495-7738 or 502-303-3663.

For additional information about vultures in Kentucky, visit the KDFWR website at www.fw.ky.gov/Wildlife/Pages/Problems-with-Vultures.aspx.

Additional information about the KFB sub-permit can be found at www.fw.ky.gov/Wildlife/Documents/BlackVultureDepredationPermitProcess.pdf. 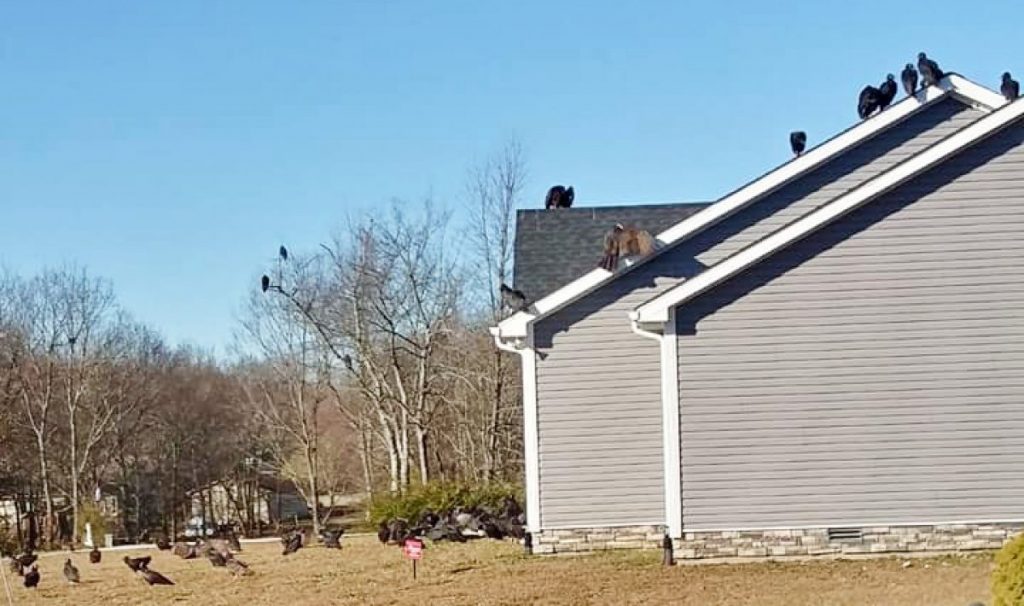 A subdivision in Horse Cave is experiencing an extreme amount of black vultures roosting near homes in the area. The vultures can be seen in this photo on the roof and throughout the yard. Photo submitted. 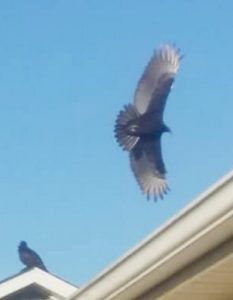 A black vulture can be identified by its black head and white tipped wings. This photo was captured as one soared over the house of Sue Thomas in Horse Cave. Photo submitted. 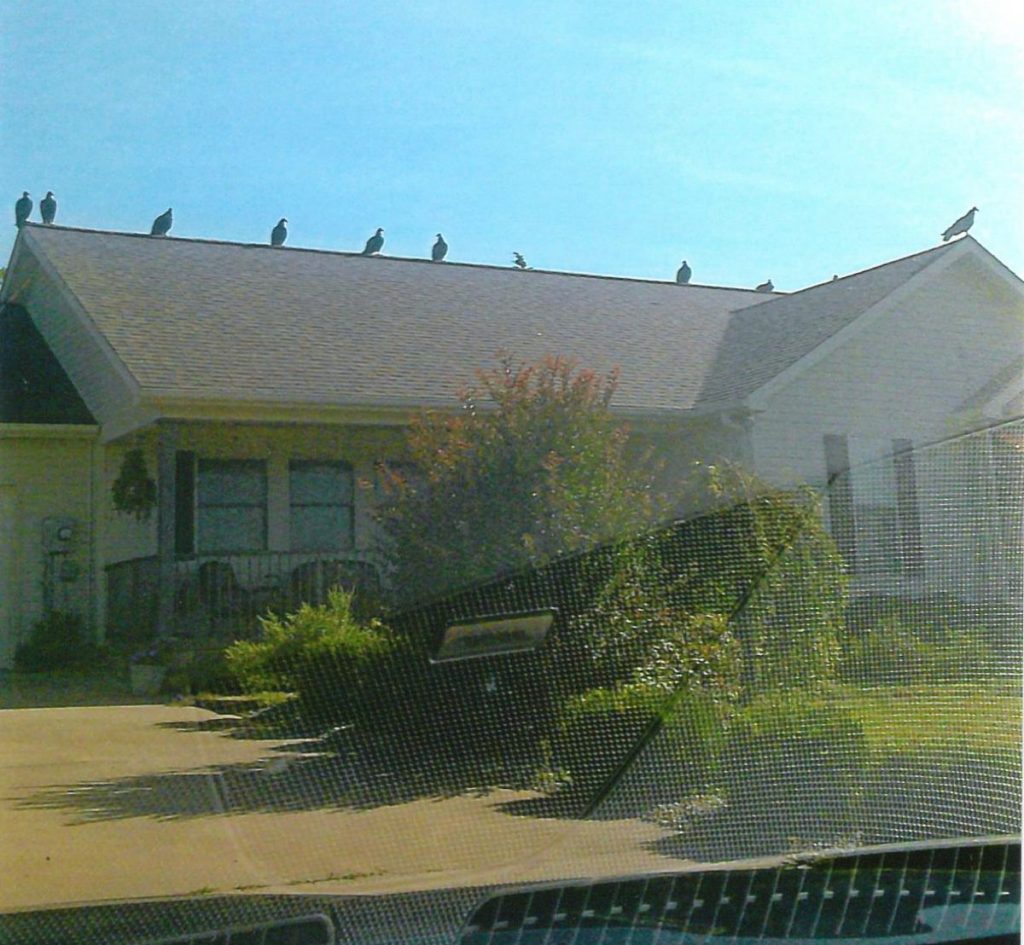 Vultures perched on the home of Sue Thomas. This photo was taken by Thomas from her car. Photo submitted.