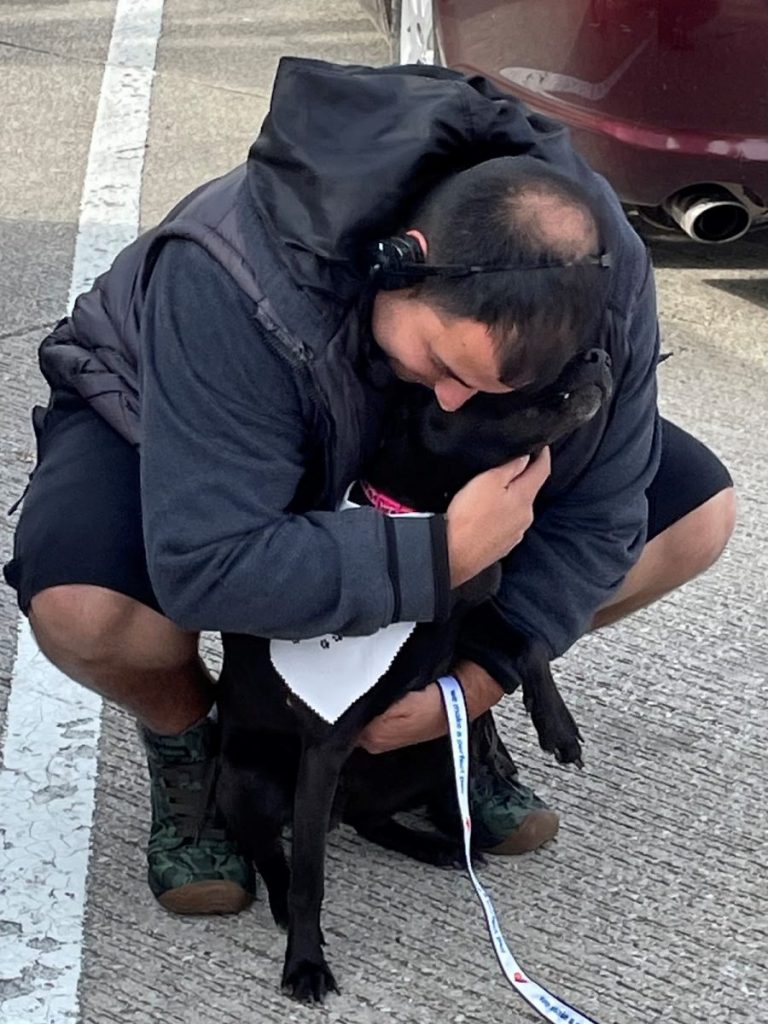 After accidentally being separated from his dog at the rest area, Rodriguez returned but couldn’t locate El Chapo. The family continued searching local lost and found sites, never giving up hope of a reunion. Photo Credit: Katrina England

On January 21st, Yan Rodriguez stopped his semi-truck at the northbound I-65 rest area in Horse Cave. Like usual, his faithful companion, El Chapo, was riding in the cab with him. Rodriguez and his wife, Yaramsi Comptiz had owned El Chapo for 6 years. Originally rescued by Rodriguez’ mother, the dog had instead bonded with the couple, and chose them as his family.

Of the couple’s two dogs, one usually rode with Rodriguez on trips, which is what El Chapo was doing the day the two were accidentally separated.

“The day he got lost, my husband had lost the keys to the truck and the truck was already having mechanical problems,” said Comptiz.  “He got out and left the door open and El Chapo got out of the truck.”

In the stress of lost keys and mechanical trouble, Rodriguez didn’t realize El Chapo had gotten out of the truck while the door was open.  After realizing El Chapo was missing, Rodriguez turned around and returned to the rest area, but couldn’t locate his dog. Then, the search of online rescue groups and lost and found posts began.

“We had no sign of anything, but we did not lose hope,” said Comptiz.

Meanwhile, everyone seemed to be interested and intrigued with the medium-sized black dog who suddenly appeared at the rest area.  Employees from all shifts took turns feeding and attempting to catch him, but the chase to catch El Chapo proved to be more difficult than expected.

“Everybody tried their best to catch him,” said Rest Area Employee Billy Russell. “All the employees, all three shifts, both sides, everybody kept him fed or tried to feed him. Lots of truck drivers left food. Everybody had a hand in this.”

Russell even brought a pet bed from his own home. They covered it in plastic to keep the wind out, and placed food inside. El Chapo still eluded everyone, and unbeknownst to all, was sleeping in the culvert under I-65, which is how he was showing up at both the northbound and southbound rest areas.

Posts were sent out across Facebook, and much like the legendary Big Foot, or perhaps more locally, Houdini the I-65 Goat, catching a glimpse of El Chapo became somewhat of a game.  Wanda Sandidge was able to snap the only known photograph of him, which was shared across Facebook. That’s when Horse Cave resident Len Chelius became involved

“The whole experience began simply because I read through lost dog pages on Facebook,” said Len Chelius, who eventually befriended and rescued El Chapo.  “Chapo’s tale of woe caught my attention mostly because I live within a 10-15 minute walk to the rest area, and walk that area often with my Husky named Buko… So the first day I strolled over the rest area to catch a sighting of Chapo, and was surprised that I did so quickly.  He had nothing to do with me and Buko and kept a healthy distance.”

On Day 2, Chelius took a handful of biscuits along on the walk, spotted him again, and was surprised when Chapo took the biscuits freely from his hand.  Also managing Buko, Chelius was unable to catch Chapo that day, but by Day 3, it was Chapo who first spotted Chelius and Buko, not the other way around.  On Day 4, a hungry Chapo made a beeline for Chelius and Buko, and ate what Chelius brought along with no hesitation.

“I got my leash ready, and on the third biscuit, I slowly and easily slipped it over his head,” said Chelius.  “I think he was relieved to be caught, as he didn’t react at all.”

Chelius took Chapo home and secured him in a kennel with warm bedding, food, and water.  By the next day, Chelius was so impressed with how well he behaved, he knew Chapo must have been a house dog.

However, Chapo escaped, and Chelius didn’t see any sign of him during the thunderstorms the next day.

“Just before dark, I see my security light on my garage come on,” said Chelius.  “I go outside to see why.  Lo and behold, who is shaking like a leaf and soaking wet but Chapo.”

Chelius decided to bring Chapo in the house, and by the following morning, he had received a message from ARK Chairperson June King letting him know Chapo’s owners had been located.

Finally, on February 26, Rodriguez and El Chapo were reunited in the same parking lot where they’d originally been separated.

As Rodriguez opened the back door of Len Chelius’ vehicle, a very happy Chapo bounded out, excited to see the owner he’d been waiting on, and ready for his next adventure.

After a few dozen pictures, some information from ARK, and smiles all around, El Chapo climbed back in his familiar truck and headed out with his owner, ending his month-long Kentucky adventure. 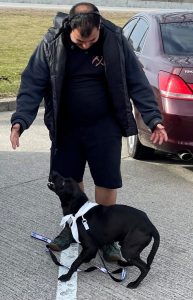 El Chapo was excited to see Rodriguez after being separated for 36 days. Photo Credit: Katrina England 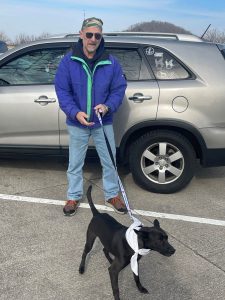 El Chapo was finally captured by Len Chelius, who had befriended him on daily walks with his husky, Buko. Photo Credit: Katrina England