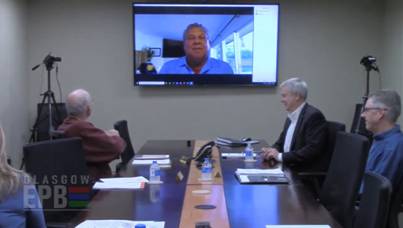 In his superintendent’s report, David Puskala discussed the fuel cost adjustments for March at the Feb. 22 board meeting for Glasgow Electric Plant Board.

The fuel cost adjustment for March will be 2.018 cents per kilowatt-hour, a slight increase from 1.947 cents in February, but still lower than January’s 2.5 cents, Puskala said.

Puskala said he trend with increased costs is mainly due to commodity prices as seen with a shift in the mix of generational resources and customers are going to end up paying for power as shift away from fossil fuels to the green energy mix.

Last month, the board approved a $21,500 cost for a new 750-kVA transformer for South Green Elementary School, which was the lowest of three bids received. However, Superintendent Puskala said when the vendor was contacted, a delivery estimate would be 80 weeks or longer before receiving the transformer. Due to the lengthy wait, Puskala said the customer requested to find another vendor. The superintendent said a vendor with a shorter lead (delivery) time was found, but the cost would be an additional $6,500.

“The customer has agreed to pay the difference for the shorter lead time,” Puskala said, “So, the net cost to the EPB is still going to be $21,500, but I wanted to make it transparent for everyone because we will be cutting a check for $28,000 to the vendor and then being reimbursed by the customer.”

Newly-seated Chairman Mark Haines asked if the vendor offering an earlier lead time is a good faith effort or a contractual obligation citing his inquiry is due to the possibility of the school being reluctant to pay the extra costs.

Puskala said, “I would say it’s probably a good faith effort instead of contractual obligation, but what we generally find is that when they give us a lead time, they usually meet or exceed it.” He told Haines he would inquire further.

Before the end of the meeting, the board received information that the vendor said they anticipate a 40-week lead time for delivery, but it isn’t a guarantee.

The board approved the transformer purchase as well as a 1.5 MVA transformer for an existing customer in the amount of $26,493.

Additionally, the Little TVA Act requires purchases made over $20,000 to be approved by the board. Puskala said transformer costs are increasing just as most everything else at this time.

Puskala also reported that after a substantial 400% rate increase to keep The Weather Channel (TWC) and a customer survey, Allen Broadcasting (owner of TWC) came back with a more reasonable proposal to continue airing the channel.

The superintendent said very early conversations have started with Warren Rural Electric Co-op (WRECC) to consider working with the Haywood Substation to create more stability and also allow them to use for service to some of their northeastern power loads in Warren Co. Puskala said it would reduce EPB’s cost of operations while also allowing WRECC to avoid costs for building a new substation for that area.

EPB has launched their new website www.glasgowepb.com despite the older website still being available. Eventually, the other domains will reroute to the new website. Puskala said the new website uses their new logo and EPB has received very positive feedback regarding the website.