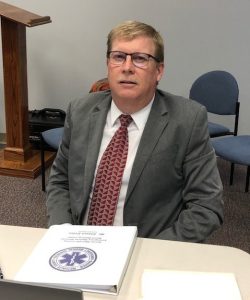 The Barren-Metcalfe Emergency Medical Services Board of Directors met in its regular session on Wednesday, February 23rd in the Barren County fiscal courtroom. All were present except Vice-Chairperson Neil Thornbury, who was att3ending another meeting,

Executive Director Joe Middleton began by introducing Shawn Estes, as Assistant Director Chief Financial Officer. Estes will move into the position being vacated by Steve Powell upon his retirement date.

After a long discussion, the motion was passed to order three ambulances from Roth Enterprises for delivery this year, and order two ambulances from Penn Care for next year’s delivery. This would bring the number of ambulances in the budget and replacement schedule up to date.

As explained at last month’s meeting, the goal is to pay off indebtedness on the current trucks so that upon receipt of the new trucks, those can be put on a 12-month term.

The board approved the finance and claims reports for January.

The average chute time [from time dispatched to the truck rolling out the door] is 1 minute 27 seconds and the average response time [time to get to the scene] is 9 minutes 59 seconds, which is under the target goal of 10 minutes. The average time on the scene was 14 minutes and 42 seconds.

“The reason our scene times are up on us near 15 minutes is because we were fighting snow…we still want to get that down closer to 10” added Gillian.

ARPA funds in the amount of $301,853.85 were received from the Barren County fiscal court and the plan was presented and approved for disbursement of the first check approximately March 14th.

The money will be disbursed in three checks, with disbursements planned for March, July, and December. A vote on whether to cap the premium fund amount at $9,000 per person was put on hold until a later meeting.

As soon as ARPA funds are received from the Metcalfe County Fiscal Court disbursement plans will be presented.

Director Middleton gave an update on staffing and training stating that currently, the service has 46 full-time employees and a pool of 43 PRN staff. PRN staff is backup staff, many of whom work for other ambulance services and have the same training. The PRN employees fill in when needed because ambulances cannot run without 2 personnel. Any PRN employee who works 100 hours in a month requires payment into the state retirement system to be made.

Currently, five full-time employees are working toward their paramedic license plus one that just completed training.

The next meeting is scheduled for March 23, 2022, at 4 p.m. at the Barren County fiscal courtroom.