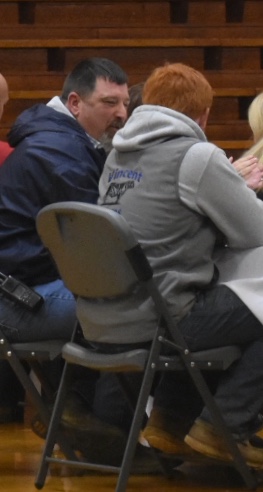 At the Republican Candidate Meet & Greet hosted by the Metcalfe County Young Republicans, the resounding theme for most candidates present seeking county offices, was their deep roots in Metcalfe County.

Incumbent District 4 Magistrate and Metcalfe native Ronnie Miller mentioned his 43 years of living in his district.

Daniel Bragg, who is running for Magistrate, sighted the multi-generation legacy of his family in the Summer Shade community. Dr. Benny Lile, Republican candidate for Judge/Executive, cited having lived in Center all his life, having grown up there on his family farm. The deep pride in the Metcalfe roots was apparent.

The exception was Mike Burton, who was somehow allowed to file for the office of Metcalfe County sheriff while a resident of Barren County.

According to Barren County PVA records, Burton resides in a home on a golf course in Glasgow, where his home-based business, Burton Logistics and Transport LLC, is also registered.

Burton initially filed in December, by using the address of a mobile home in Knob Lick.

He also has an address in the Wisdom community listed on his campaign Facebook page.

According to Kentucky Revised Statutes and various Kentucky case law a residence is defined as “an abode where someone lives, not a naked legal residence”. Meaning, a candidate’s residence must be the place where they live day to day life.

One of the legal requirements for running for sheriff in any Kentucky county is having an established residence in the county at least one year prior to the election.

According to a WBKO news report from January 28 of 2016, Burton’s time with the Glasgow Police Department ended when he was fired. The news report stated “Burton was charged with violating codes of Ethical Conduct, Conduct Unbecoming of an Officer, and Sexual Harassment.” He filed an appeal, but lost.

The newspaper attempted to confirm Mr. Burton’s to clarify by phone and email. At press time, the newspaper had not received a reply.

Constable Tony Shockley, lifelong Metcalfe Countian, is also seeking the office of sheriff. He stated that he would like to “fill the office with deputies”, but offered no specific solutions to budgetary restraints keeping such from being possible.

Josh Neal, former SRO, is seeking the office of sheriff again. Neal described himself as a “people person”, and candidate Eric Bryant spoke briefly, asking people to vote for him.

Incumbent Sheriff Lonnie Hodges was unable to attend due to an illness. Deputy Jarrod Steele was present and spoke on his behalf. Steele cited Hodges’ military experience, lengthy career in law enforcement, and countless hours of dedication to the office during former sheriff Ricky Brook’s illness, and since the special election.

Each magisterial district was represented by one individual, although numerous Republicans have filed for the positions. As far as Magistrate incumbents, only Ronnie Miller (District 4) was present.

For District 1, Brock Stilts spoke about his love of God and country. District 3 was represented by Daniel Bragg, who said that he could not make promises, but that he would work hard for the community where he lives and works.

District 2 is represented by Dagan Rock, who spoke to his strong Second Amendment beliefs.

Sharon Howard, the Republican Candidate for County Attorney, asked for votes and mentioned her previous experience as county attorney.

Dr. Benny Lile spoke of his experience with the school system, the knowledge of the county and fiscal responsibility.

Though Jailer Randal Shive faces no opposition in the election, he was present, to support the local Republican Party.

This event signifies the beginning of the political season. The Kentucky primary will be held on May 17.