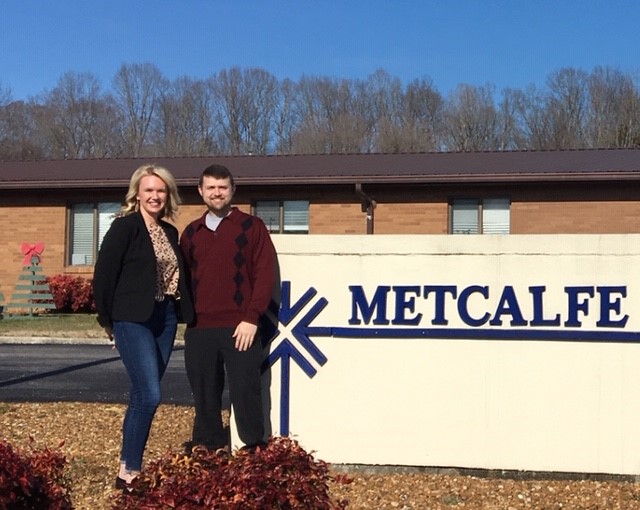 For the past 22 years, Amy Neighbors has been the Administrator of the Metcalfe Health Care Center in Edmonton. On January the 29th of this month, she will pass the torch to another lifelong resident of the county, Cody Brooks. Brooks says it’s Amy who was his greatest influence when it came to choosing a career path.

“If it had not been for her, I would not have taken this path. I admire her leadership style. She was always willing to help and encourage me when I worked here, and I want to build on the foundation she built here, and leave my own mark,” Brooks said.

Brooks began his work in the long-term care industry as a receptionist at the Metcalfe Health Care Center. At the time he was working on his Associate’s degree at SKYCTC, and through encouragement from and conversations with Neighbors, he then sought his Bachelors in Health Care Administration from WKU. His only trepidation was that he knew in order to find work he would have to leave home.

His work took him to many places, including Colorado and South Dakota. He eventually wound up in West Virginia in a permanent position during the onset of Covid. Brooks says he loved the work, but did not like being away from Kentucky. Then, six months ago he got a text from Neighbors.

“I told him I was pulling the trigger, and I asked if he was interested in coming back here,” she said. He was.

“I’m glad to be back here. Many of the residents are residents that were here when I was here before, and I know the staff and some of the families,” Brooks said.

As for Neighbors, she says the decision to retire was a combination of factors, and that she is looking forward to spending more time with her four grandchildren.

It was not a decision she took lightly, it is something she had been considering for a couple of years, but never felt the timing was right, especially once COVID came about, she just couldn’t leave her residents and staff during such a difficult time.

“You know how people talk about dog years versus human years? Well, I would equate the same to long-term care years, 22 years in this business feels so much longer,” she said. “I came to work here when I was 24 years old. I feel like in many ways this is my identity. It’s how people know me, and it’s what I’ve always done. But I am looking forward to something new.”

Aside from spending time with family, she says she doesn’t have any specific plans and wants to leave her options open for the future. Regardless of where the road leads Neighbors now, she knows what she is taking with her from the past 22 years.

“I’ve learned to take everything with a grain of salt, to always be fair and consistent, to value relationships made, and to put your heart into everything you do,” she said.