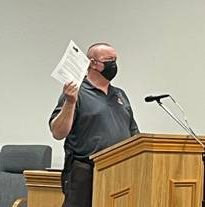 The emergency management department is responsible for testing the outdoor tornado sirens and Shirley discussed several issues recently found regarding them.

Shirley confirmed every siren had been tested and some were found to have blown fuses and some completely unplugged.

“We don’t know why that is,” Shirley said, “But have taken appropriate measures to make sure it doesn’t help again.”

He said he had received complaints that some sirens haven’t been heard “in months.” He asked the public to notify emergency management if sirens are not heard.

He also explained how they are tested. “We don’t see every siren. We get a radio report back from it and if the radio talks to it, and it talks back, and it says it’s good to go and makes no noise, then we have no way of knowing [they aren’t working] until we actually test them.”

Shirley said as far as testing the outdoor sirens that is completed annually. He added that the software used to activate the sirens has outdated software running on an outdated computer that is fifteen years old. The old software is not compatible with newer computers and newer software has been ordered.

Shirley cautioned the public in relying on the outdoor warning systems in the event of severe weather. The sirens are designed to warn individuals, ideally within a mile from the siren, who are outdoors when severe weather warnings are active.

Shirley urges every household to invest in a weather radio because the outdoor sirens are not designed to wake people up inside their homes. Weather radios can be programmed to activate when severe weather warnings have been issued for Barren County, as well as multiple counties.

The City of Glasgow is monetarily responsible for the costs associated with the outdoor warning systems.

A pending appointment to reappoint D.T. Froedge to the Board of Directors for the Glasgow Electric Plant Board failed after council members split in a 4-5 vote. His term expires at the end of this month.

Froedge has served the prior four years on the GEPB board, many of which were met with tumultuous and contentious issues as ongoing disagreements spiraled between board members during his tenure especially with regards to the peak usage “Infotricity” rate model. Froedge is currently the chairman of the GEPB board.

Some council members commended the current GEPB board.

“There is a great staff support now and unity [with] a great focus,” Norris said, “He’s a very likeable leader and I think we can go forward.”

Councilwoman Marna Kirkpatrick also said Puskala informed her that the board and company is “in a really pretty good place.”

Before voting ‘yes’ to approve Froedge’s reappointment, Councilman Terry Bunnell said he had received feedback over the last several weeks regarding the consideration.

“I want to say that I appreciate the feedback and the input from the citizens of Glasgow,” Bunnell said, “A lot [has] occurred at the Glasgow Electric Plant Board over the last 12 months and I’m very grateful to the people for the work that they’ve done to improve our local utility.”

Dissenting councilmembers did not elaborate on their ‘no’ votes, however, Councilman Patrick Gaunce said he would prefer a board member to represent the large industry.

Glasgow Mayor Harold Armstrong said he had contacted many industrial managers in the area with only one returned interest that ultimately changed directions and unable to serve at this time.

“He’s willing to serve and I talked to the CEO and President both out there and they’re both on board with that,” Gaunce said.

The council approved a resolution that will apply for a grant in the amount of $125,804.76 through FEMA assistance for the purpose of purchasing a mobile breathing air system for the Glasgow Fire Department. If the grant is received, the local share amount will be a 5% matching grant in the amount of $6,290.24, which brings the total to $132,095.00.

The council went into closed session to discuss the possible sale of property. No actions were made after the session.

City Hall, DPW Street, Sanitation, Transit, Stormwater and Landfill Departments will be closed on Monday, Jan. 17 in observance of Martin Luther King Jr. holiday. Monday’s garbage and recycling will be collected on Tuesday, Jan 18. Please have your garbage cart and bin at the curbside by 7:00 AM.

The next scheduled meeting is Jan. 24 at 7:00 PM in the City Hall Council Chambers.