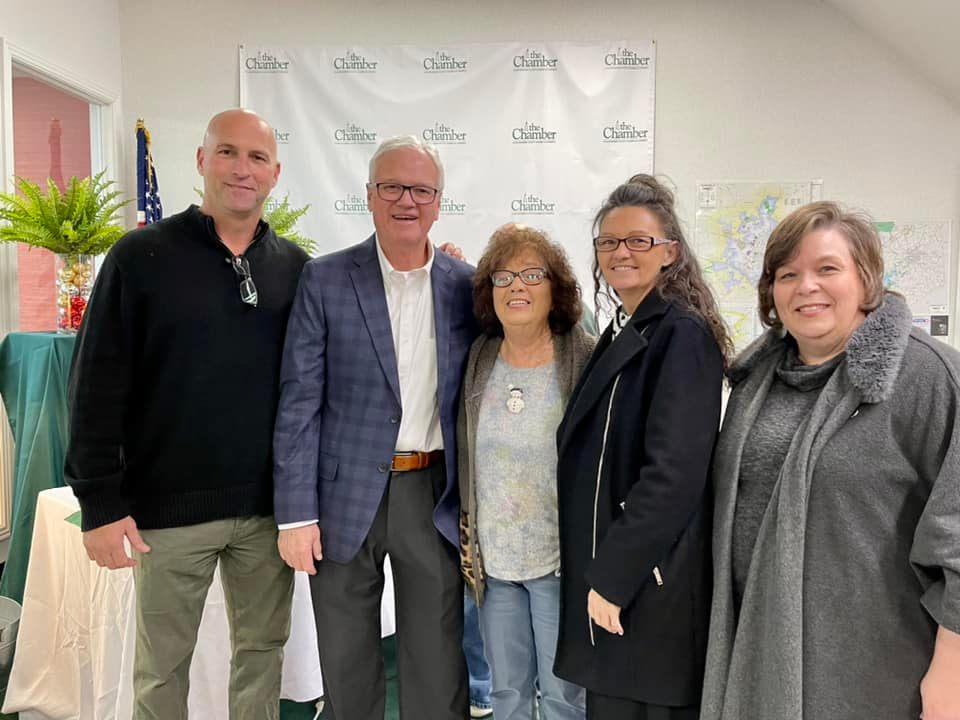 A retirement reception was held for Ernie Myers, second from left, as he retires from the Glasgow/Barren County Chamber of Commerce after 17 years of service. Photo/Chamber Facebook.

Ernie Myers knows quite well what it means to contribute to the community.

As a seventh-generation Glasgow native, Myers entered the workforce at the young age of 12. Consequently, over the past 60 years, his work ethic never wavered, nor did his humble demeanor or his service to others.

In 1989, Myers sold his family’s lumber company and began traveling throughout Kentucky, Indiana, and Tennessee selling lumber at wholesale. When his children needed more time with him at home, Myers applied for and accepted a job with the Glasgow/Barren County Industrial Development Economic Authority (IDEA) in 1997. 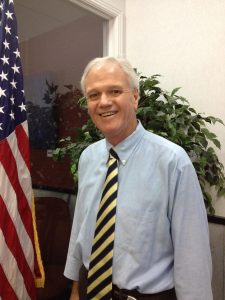 Ernie Myers has retired from the Glasgow/Barren County Chamber of Commerce after 17 years of service. Photo/Chamber Facebook.

By January of 2005, Myers became the Executive Vice-President/Chief Operating Officer (COO) for the Glasgow/Barren County Chamber of Commerce. Now, after faithfully serving in this position for 17 years, Myers has chosen to retire.

During his time at the Chamber, Myers served in a variety of capacities.

“I did everything from open the doors in the morning to taking the trash out and then everything in between, to be perfectly honest,” Myers said. “I had the responsibility for maintaining membership, maintaining all of the events and programs, and running all of the events that the Chamber did…Everything that the Chamber did, I was the chief cook and bottle washer for that event.”

Each year, Myers greatly enjoyed the various projects and events that the Chamber was involved in.

“Our annual golf tournament was always a great time. The South Central Kentucky Business Expo was a good thing,” Myers said. “We did an agriculture festival which turned into a Farm, Home, and Garden Show. That was a nice event. Industry Appreciation Week was always a nice time. Then our ambassadors did some philanthropic work at the Mayfield Plaza. We would take nice gifts to the folks there at the housing authority.”

“We’ve also had a very definite role in the Glasgow Highland Games, and I hope that is an event which can be reborn sometime within the next couple of years,” Myers added. “If not for the Chamber, that would not have happened.”

The Glasgow/Barren County annual Christmas parade has also been a favorite of Myer’s.

Not only has Myers been there through the years for Glasgow and Barren County’s major annual events, but he has also experienced firsthand both the good and bad times that the city and county have faced.

“In the past few years, Glasgow and Barren County have had their challenges,” Myers said. “…We’ve had our challenges in manufacturing jobs. We’ve taken some licks. RR Donnelley, for instance, left us. Dana (Incorporated) left us. That took away a number of jobs, but given new leadership in that area, looks like we are pretty much on the rebound. That is not because of my leadership. That is because of the leadership in the BCEA (Barren County Economic Authority), which is doing very well.”

As far as growth, Myers stated that the county remains a constant leader in the agriculture industry and is also seeing an increase in entrepreneurship.

“I know that speaking for Barren County alone, one of the areas of growth which has been, how should I put this, which has been maintained for decades, is the fact that we are and have been an agrarian society,” Myers said. “The agriculture used to be and remains our #1 industry, so I can say that as far as Barren County goes, pretty much everything is built around agriculture, and rightly so. That’s a good thing.”

“…As far as commercial business goes, I would say that we’ve held our own pretty well,” Myers continued. “We’ve had some entrepreneurs step up to the plate, and it seems like we’re gaining new stores, especially boutique stores and local stores like you would see on the Square. That growth is quite healthy as we speak right now…There are folks who are investing into the community, and they seem to realize the worth of Glasgow and Barren County as it relates to a good, solid commercial business.” 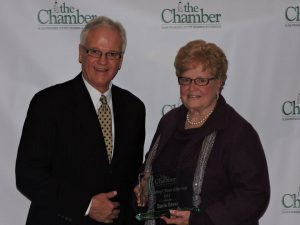 During his time as Vice-President and COO of the Chamber, Myers had quite a few accomplishments under his belt. But in pure humbleness, he said his greatest accomplishment was simply being part of the community and helping others along the way.

“I think that for most of those 17 years, the morale of the Chamber has been quite positive, and I hope I’ve been a part of that. I hope I have been some bit of an example of, what do you call it? A catalyst towards helping people within our Chamber,” Myers said. “…I believe if I’m going to point towards one thing, it’s going to be that I had good people surrounding me. I believe that is true with most good, successful organizations. I think the Chamber has been a successful organization for Glasgow and Barren County. I believe it does good work.”

When asked if he would have changed anything during his time with the Chamber, Myers said that perhaps he would have put forth additional efforts in inspiring more Chamber members to become involved in events and philanthropic work.

“The Chamber does not work without its membership. It seems like a lot of our events, a lot of our projects, the same people stepped up to the plate year after year,” he said. “So, I would say maybe I would’ve tried a bit harder to recruit more people to take part in the projects that we had.”

There is no doubt that Myers has dedicated countless hours to Chamber projects and events in admiration for the community. But when asked why he chose to retire now, Myer’s answer was quite simple: “I’m 72. You can write that in bold print.”

Myers plans to spend more time with his grandchildren, as well as do a bit of traveling. However, as his unwavering work ethic continues, Myers plans on reentering the workforce in what he calls, “one shape, form, or fashion.”

“I’ve worked since I was 12, and that’s all I know,” Myers said. “For these next few weeks, I’m going to be getting up in the morning, and I won’t have to be at work at 7:30. That’s going to be different…I imagine I’ll reenter the workforce doing something. We’ll just see what plays out there.”

Although most retirees move abroad and plant roots elsewhere, this is not the case for Myers. He has no intentions of leaving the place he calls home.

“Many of my peers have decided that when they quit work and retire, they’re going to move away from Glasgow,” he added. “Well, I’m not. Glasgow has put bread on my table now for 60 years, and I’m sticking around. I’m going to be here until they take me out feet first.”

With undeniable gratitude, Myers is appreciative for the opportunity to have served others during his time with the Chamber.

“I would like to thank the community of Glasgow and Barren County simply for the support. The support that is outpouring from our community to the Chamber of Commerce and to me personally has been astounding,” Myers said. “That is something that I appreciate more than I’ll be able to say in just a few words, so thank you to our community for the cooperation that you’ve shown over these 17 years.”

On behalf of Jobe Publishing, Inc. and our newspaper, we extend our deepest appreciation to Ernie Myers for his service to the Chamber and our community. We wish him a happy and healthy retirement. 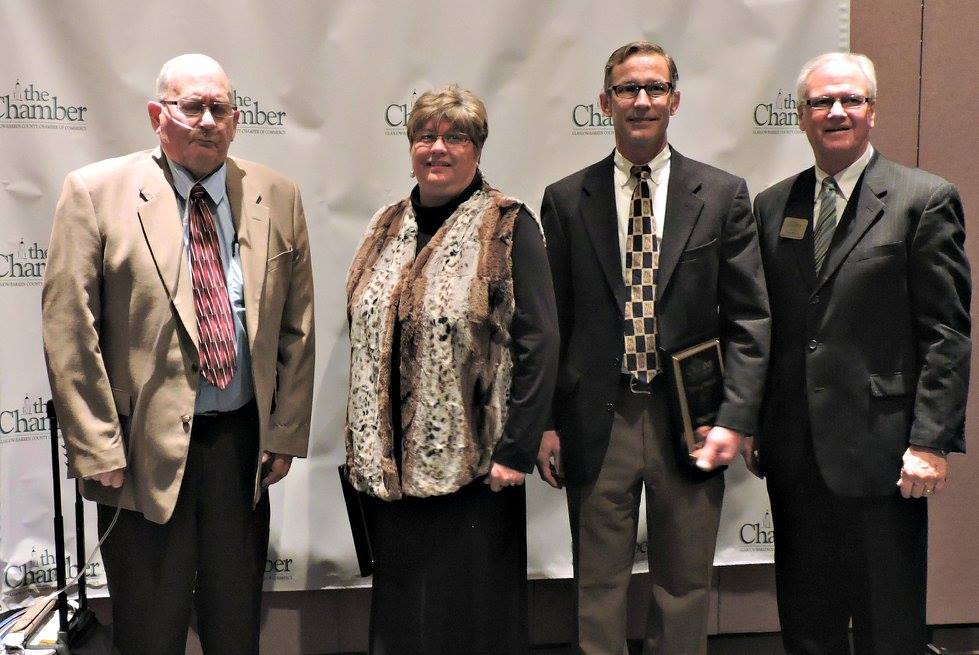 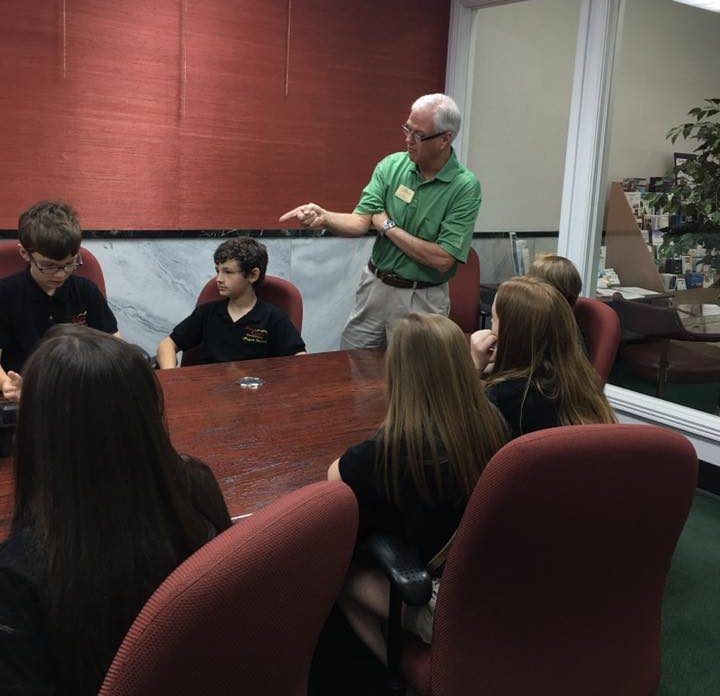 Ernie Myers in 2016 as he spoke with Red Cross Elementary Magnet students about the importance of the Chamber of Commerce. Photo/Chamber Facebook. 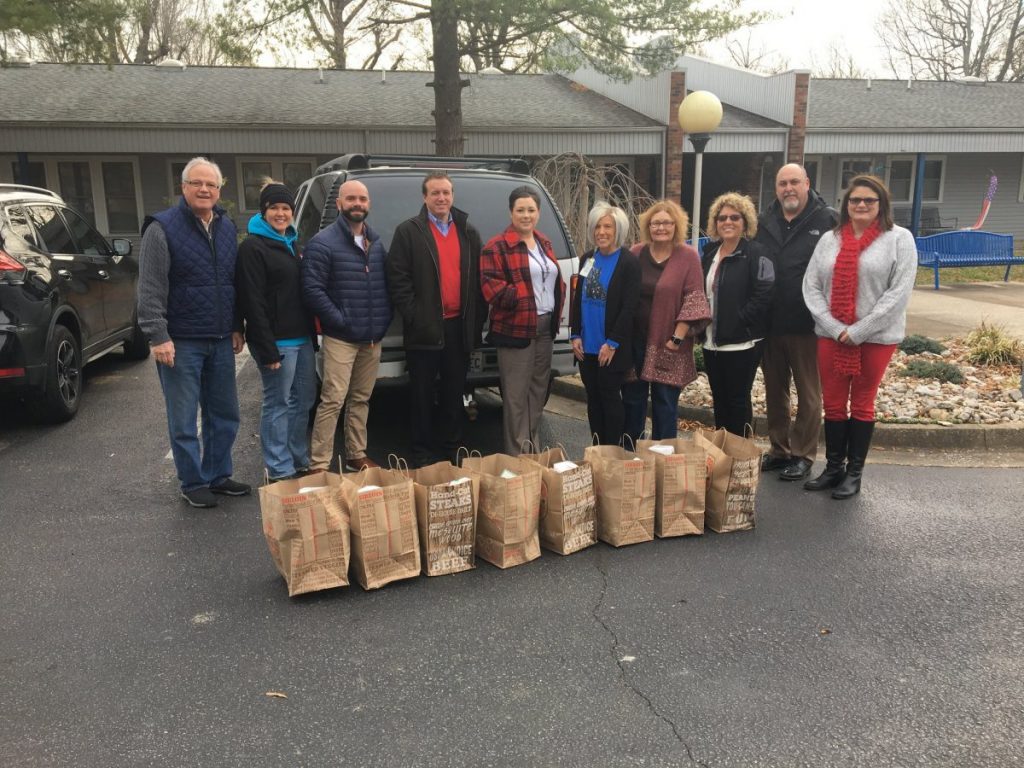 Ernie Myers, far left, played a big role in the Chamber’s Ambassador Annual Mayfield Plaza Day in which the Chamber donated household items, hygiene items, and other needs to the residents of the Mayfield Plaza. Photo/Chamber Facebook. 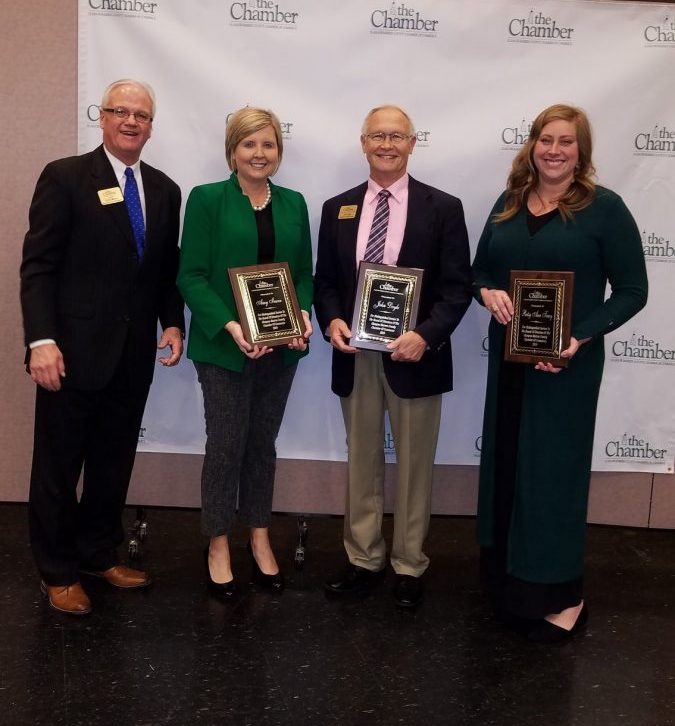 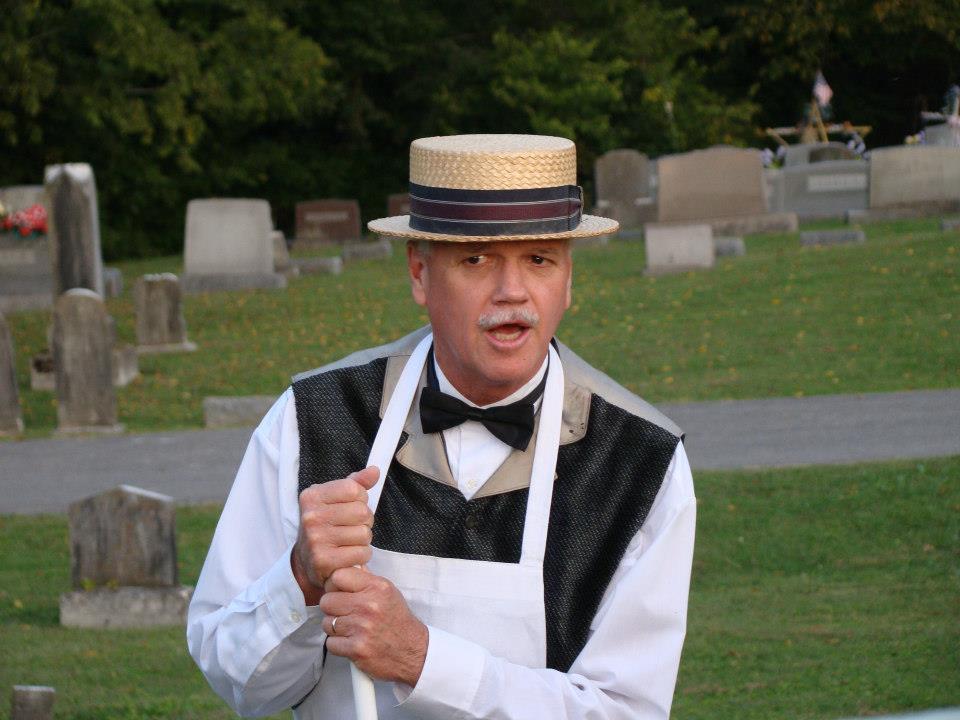 Ernie Myers in his portrayal as Henry Raubold in 2012. Photo/Progress Archives. 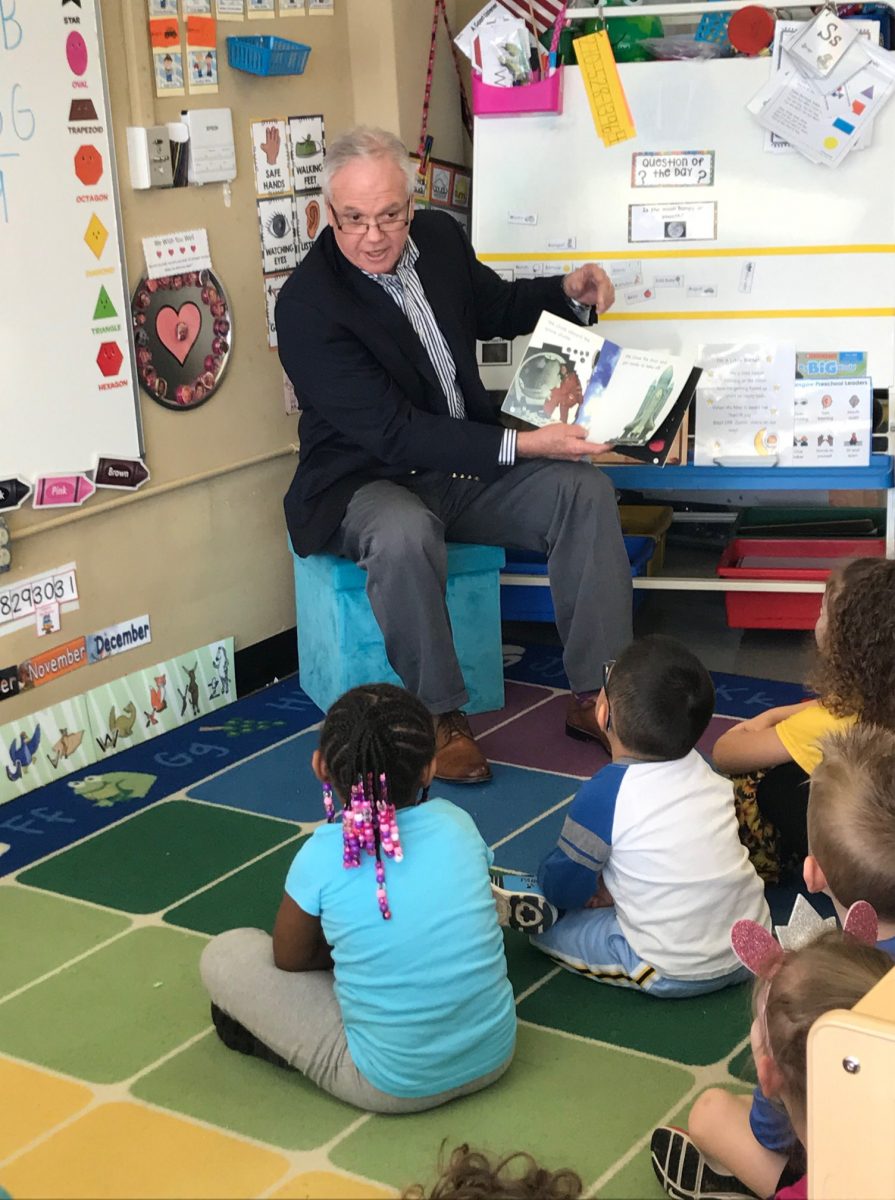 Ernie Myers reading to a group of preschool students. Photo/Facebook. 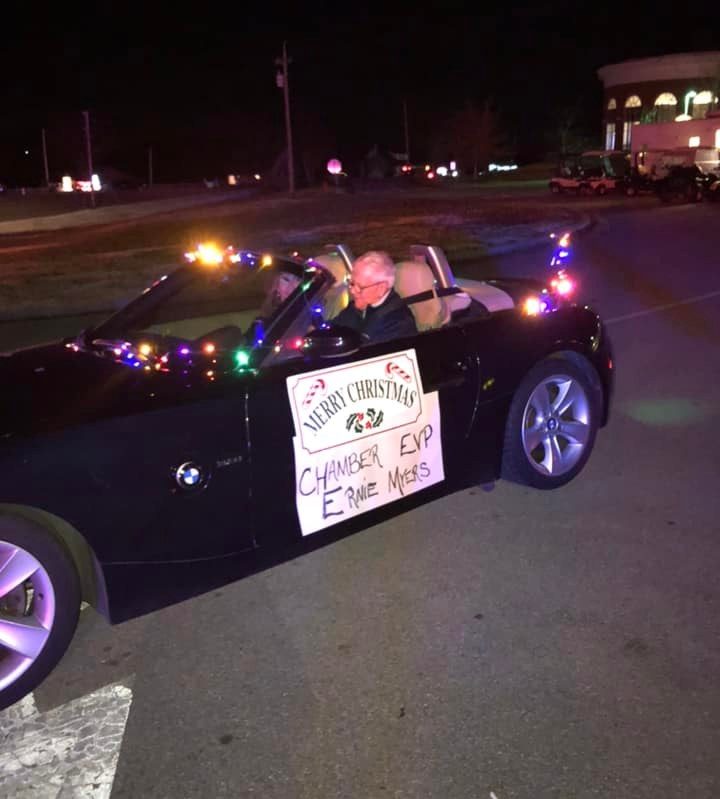