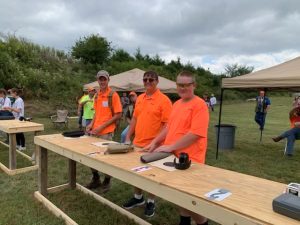 Hunting and fishing are more than a hobby, for many, it’s a way of life coupled with age-old family traditions. In the 1980s, the Metcalfe County rod and gun club was a thriving organization with numerous members, that shared in the joys of the great outdoors as well as camaraderie.

“My children were raised in the Rod and Gun Club,” said Ken Childers who spoke on the group’s behalf.

35 names have signed in support of the re-organization of the club. More are being gathered.

“At this time there is a great deal of interest in re-organizing the club, because there are more hunters and fishermen in the county and there have been in my lifetime,” Childers said.

He reiterated that although it would be the reestablishment of a tradition there would be changes.

“There are more women and teenagers interested in hunting and fishing than ever before,” he said.

“In today’s world, I think we need it more than ever. It’s great fellowship, and it was always a good community atmosphere that we would like to have restored,” said Childers.

He suggested that the club use the buildings at the county lake which they helped to build in previous years.

Barry Gilley, county attorney, reported that the club was still registered, but as inactive and that tax-exempt status was revoked in 2011, but could be easily reinstated.

Childers and the group of supporters to continue gathering support for the re-organization.