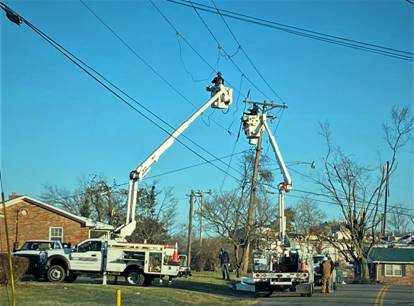 After a deadly tornado outbreak that swept across six states on Dec. 10th into the morning of Dec. 11th, many communities across the Commonwealth were left without electricity including Glasgow Electric Plant Board customers.

The damage across Kentucky was extensive. Northern Barren County into Hart County experienced damages caused by an EF-1 tornado while an EF-3 ripped through eastern areas of Bowling Green leaving behind significant destruction and loss of life, including entire families. Seventy-four people lost their lives in Kentucky.

While Glasgow did not see damage from the statewide tornado outbreak as nearby communities did, a citywide power outage did occur as a result of the damaging storms.

GEPB customers were without electricity for approximately four hours after two towers from the East Bowling Green Substation were torn to the ground.

GEPB receives electricity from the Tennessee Valley Authority (TVA) at two delivery points and there is currently a new 161kV Switching Station being installed between those two points in South Glasgow. During the final stages of this project, GEPB was receiving power radially from the East Bowling Green station. The tornado took out two towers on the 161kV transmission line from East Bowling Green to Haywood.

This resulted in GEPB needing to reconfigure its system to receive power from a different delivery point once they lost the transmission line.

“We started the process of talking with East Kentucky Power,” Puskala said, “We had about 25 megawatts that we needed to bring on and they said, ‘it looks like we have probably 50 megawatts of capacity so don’t bring it on all at once.”

That is when GEPB started the process of slowly shifting the city’s power from TVA to EKP approximately 1.5 hours into the outage. Puskala said the conversion went great without issues.

GEPB customers, though unbeknownst to most, were receiving their electricity from East Kentucky Power from Dec. 10th through Dec. 15th before shifting back to TVA through the South Glasgow Substation.

Despite receiving electricity from EKP, Glasgow Electric Plant Board will not incur any extra expenses.

Puskala explained after the meeting, “Even though we were connected to EKP for several days, TVA will still be invoicing us at the rates per our contract with them.”

He said through a prearranged agreement to cover situations like this, TVA would be paying EKP for the power supplied to Glasgow.

“The three companies, Glasgow EPB, TVA, and EKP will work together to compile the information necessary for billing…and the end result will be as if we purchased the power from TVA as normal and per our contract terms with them,” Puskala said.

After realizing the extent of damage, Puskala said they began communicating with Bowling Green to offer resources for the damaged city. They also sent linemen to Haywood for line patrolling.

“As the sun rose on Saturday, we started to understand what had really happened,” Puskala said. He told board members an EPB crew went to assist in Bowling Green on Sunday, Dec. 12, and continued to assist for a total of nine days until no longer needed.

“We were fortunate,” Puskala said, referring to the near-miss widespread tornadoes across the state.

Puskala said the crew had a great learning experience for them with regards to working lines after storm damage.

“They learned a lot,” he said, “Storm trouble is one of the best places to learn [despite] it also being dangerous.”

The GEPB linemen were under the direction of a retired Bowling Green Municipal Utilities lineman and learned a lot from him.

“[Our crew was] impressed by the way he was able to analyze that particular project that they were going to tackle that day and work safely,” Puskala said.

Despite the catastrophe, for our local GEPB crew, it was a great team effort.

Tobe Morgan, a foreman at GEPB, told the Barren County Progress the entire experience for him and his crew was a humbling one. Morgan also discussed their experience being on the frontlines of the aftermath in Bowling Green.

“It was just devastating,” Morgan said, “It was really hard to comprehend what had happened even looking at it—the damage was so extensive.”

Morgan said a bird dog, or leader familiar with the system they were working with, led his crew around. He told Morgan, out of his 27 years this storm was almost the worst he had seen in his life.

Morgan said over the 9-day span, they repaired lines that turned on electricity for 800 people.

Morgan, who started as a groundsman at GEPB fifteen years ago and worked his way to line foreman, touched on the humbling aspect of the catastrophic situation he found himself in.

“It was a very humbling experience for us all and seeing what could happen. It could have been us just as easily thirty miles up the road and hit Glasgow rather than Bowling Green.”

Morgan said the community coming together as it has, has been unreal.

“The outpouring support of the community as a whole—the neighbors, the strangers—coming together to help was unreal,” Morgan said.

“It kind of gives you a little bit of hope for humanity,” Morgan continued, “The way everything is nowadays, you just wonder about the human race sometimes and when something like this happens and you see how everybody’s pulled together just to come help neighbors they don’t even know, it’s very humbling.”

He said those that went to help from GEPB were lucky because often people want to help but are unsure how or what to do, but working at GEPB gave him and his crew a skill set that would be useful to help those who needed it most.

Alongside Morgan, three others spent the nine days in Bowling Green working to turn the power back on for the tornado survivors: Kirk Brooks and Brian Gruber, both journeyman linemen, and Bruce King, apprentice lineman. Also assisted on the last day were apprentice linemen Jessie Jones and Gill Thomas. 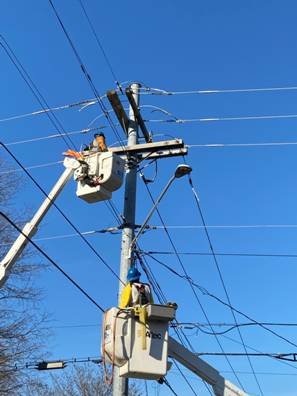 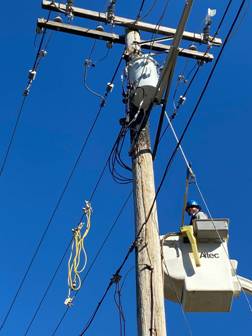 A lineman from Glasgow Electric Plant Board assisting in the storm damage that resulted in Bowling Green from an EF-3 tornado in mid-December. Photo courtesy/GEPB Construction-Operations Manager Trigg Perkins