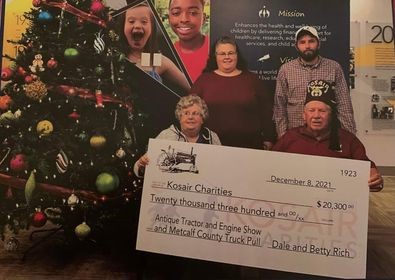 Pictured in front holding the donation check are Betty and Dale Rich and in the back are Kristina and Darrell Anderson. Photo submitted

Some songs will always stick with you and you will know them from the first few notes you hear. And some people in our community…well, they are the same.

From the tone of their voice, their laugh, or their many good deeds…they are just familiar and known. Like those lyrics coming through the radio of an old 90s song. Weathered and worn, but still as good as the first time you ever heard the song or you met the man. You hear the name, and you just know.

…he wrote ‘Billy Bob loves Charlene,’ in letters three foot high. And the whole town said that he should have used red, but it looked good to Charlene… in John Deere Green.    –Sung by Joe Diffie

If you have ever been around Dale Rich, you know the name, you know the man, you know the story (or you are about to) and you know when his phone rings you are gonna hear that song. You may even substitute in the names Dale and Mrs. Betty as they are affectionately known by their whole town when you hear those first few notes.

And the green…if you have ever been to their farm…you know.

Dale loves his Betty Lou, his John Deere Tractors, his farm, and children-his own, his grandchildren, and those in the community.

He has been helping children and their families for more than 20 years, with his famous Antique Tractor and Engine Show and all of the fundraisers that have branched off of it over the years.

When talking to Dale, who notes he could talk about his beloved charity-Kosair Children’s Charities, all day, he speaks of 20 years ago like it was yesterday.

“A lot of people think it began because we had children in Kosair and had been helped by them. We didn’t. We were very blessed not to, but you just never know what the future holds or when it may affect you or your loved ones.”

Dale first became acquainted with Kosair in 2001 when he was asked to attend a St. Judes Shriners fundraiser in Mt. Gilead.

He laughs, “There was a little boy, I will never forget him…Julio. He was nine years old and he had Leukemia. He was fascinated with my tractor and he ran over to me and I took him for a ride. He spent the rest of the day with me. Stuck right to me.”

Dale, continued, noting, “We were auctioning/selling toys that day and Julio asked me about them. I told him to go pick out anything he wanted and to tell the lady running it that the man on the tractor said it was free. He ran over there and pointed at me and she just laughed and gave it to him. He came back with a big ol’ 4×4-probably cost $70 back then. His parents tried to ask me about it and I told them, “this is between me and him, don’t you worry about it.”

The following year, in 2002, Dale decided he was going to start his own Kosair Children’s Charities fundraiser, benefitting local children in Monroe, Barren, and Metcalfe Counties, and the Antique Tractor and Engine Show were born.

The event was held on the Rich farm on Cap Harlan Rd., in Tompkinsville, kicking off with a flag-raising and recognition of all Kosair kids in attendance and those who had passed away.

And the green? We’re getting there…

Perhaps a highlight of the day, for the big kids at least, was the John Deere Silo-an old grain bin remodeled into a giant round display case, complete with a JD Green spiral staircase, full of toy tractors and other JD toys, knives, coins, guns, and other collectibles, open for guests to explore throughout the day.

And that was only the beginning.

Over the years the event grew tremendously as wagon loads of people were shuttled in to spend the day. Volunteers spent weeks readying for the event, held in August each year. Businesses donated towards the auction and entire families donned their Kosiar shirts with the blue, red, and yellow kites on them and headed out, putting in their time to make the event bigger and better each year.

“There is a lot more to it than people think. It takes two to three years just to figure out what you are doing. I started it all…It was my idea, but I can’t and I won’t take credit. It would not be possible without the many, many volunteers. The entire community came together for this event and they have been the ones to keep it going when Betty Lou and I were no longer able.”

Dale noted that when he began the charity he had some choices to make on how it worked and where the money would go. “They asked me if I wanted it to go to the kids or to the hospital. I said the kids.”

The kids and their families need this. I put my name on it, but it is not just me. Like I said, it is the volunteers and the ones who have taken it over, putting their own spin on the different fundraisers over the years.”

There are way too many names for me to mention here, but the community knows who all was involved.

Those fundraisers? Over the years they have ranged from an annual yard sale, chili suppers, a cruise-in, toy drives, and even a special event where Dale had to shave his head and another where he and a friend, Monroe County’s own JJ Likens, dyed their beards blue…and you guessed it…John Deere Green.

Dale tells us that these events were not just in Monroe County, as Doug Harris, a father to a child who was helped by Kosair Charities, called up Dale one day and wanted to have a Tractor Pull to raise funds toward Dale’s endeavors.

“Again, he and his volunteers did all the work. My name was just on it. That has been an ongoing event for several years as well. This year they had over 100 trucks and tractors and raised right at $11,000. ”

Over the past several years the funds raised at the events have gone from that original $3,300 to sometimes $26 to $27,000 a year, written in giant checks and delivered by Dale himself as he travels to Louisville to present them.

And this year was no different.

Dale notes that due to health issues and simply growing older, that he and his Betty Lou were no longer able to do the fundraisers-the main event on the farm is no longer held, but his friends, his community, the volunteers…well they said, “We’re not quitting!”

On Saturday, Dec. 4, at the Main Street Auction, in Tompkinsville, the annual chili supper and auction, which began a few years ago, was held.

Dale notes again that this event would not have been possible without the organization and work from Lisa Jobe and Darrel and Kristina Anderson, of the Main Street Auction. “I helped, but it was all them and other volunteers-too many to mention, but the auction folk, they organized it all. They have ran the chili supper the past couple years…and this one…well it was the best auction we ever had.”

“There were people bidding-spending money…the economy is not the best this year, but they didn’t care. It was all for the children. I was really tickled with it.”

This year’s check, including funds raised from the Truck and Tractor Pull in Edmonton, will be written for a grand total of $20,300. It will be delivered on Wednesday, Dec. 8, along with what Dale calls, “All the toys you can shove in a pickup truck,” from the toy drive held at the Main Street Auction.

And while Dale does not like to have the credit or the spotlight fall on him and makes sure to point out the volunteers who have worked tirelessly for the past 20 years, he will be the one to deliver that check. And his legacy will no doubt continue for the next 20 years and even more to come, just like those old songs, weathered and worn, that you know immediately from the first few notes.

*Now more than once the town has discovered painting over it ain’t no use.

There ain’t no paint in the world that’ll cover it, the heart keeps showing through…*

And that is something you can be sure of. He may not have been out painting water towers, but his heart shines for the whole county to see and his name, Dale Rich, and all he has done for the children of Kosair will go down in Monroe County history. 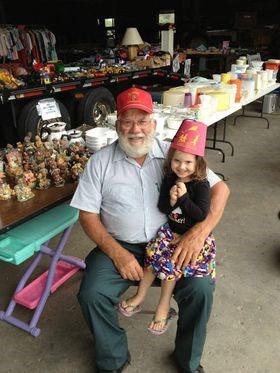