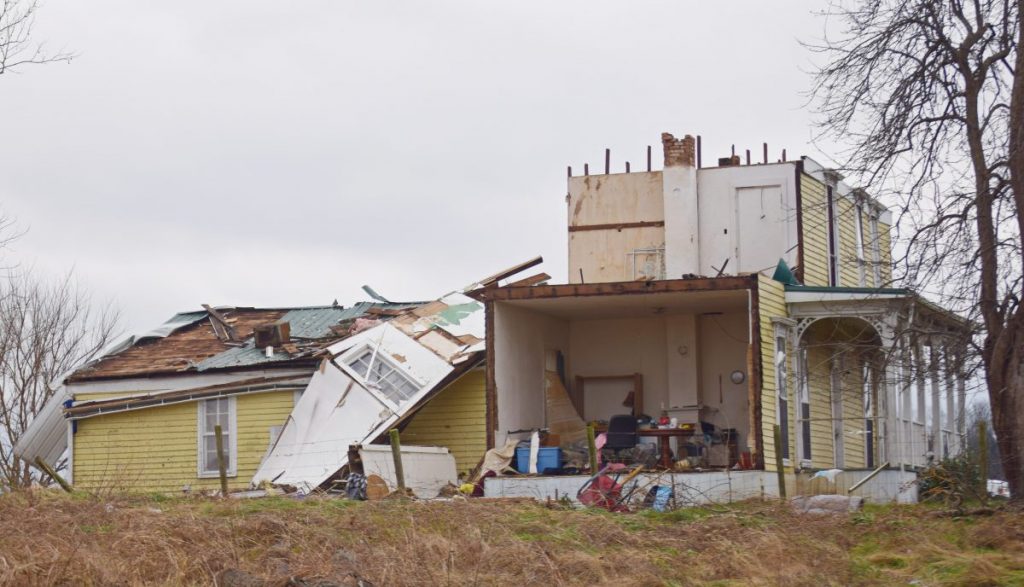 This house, located on 31-E in Hardyville, was destroyed by an EF-2 tornado that swept through the community. Photo by Mary Beth Sallee.

In the early morning hours of December 11, Hart County was struck by tornadic activity as areas in Hardyville, Canmer, Munfordville, and Horse Cave received damage.

According to the National Weather Service, an EF-1 tornado (90 mph winds) swept through Horse Cave and intensified into an EF-2 tornado (115 mph winds) as it hit Hardyville. The tornado lost intensity as it swept through Canmer and continued on into neighboring Green County.

No fatalities have been reported within the county. However, several homes were severely damaged.

Bonnie and Russell Puckett have lived on Shady Lane Church Road in Hardyville for the past 15 years. Their home was destroyed by the tornado.

“It was just terrible. I mean, this happened so quick,” Bonnie said. “There was no way we could get out to safety. It happened that quick.”

As Bonnie was watching the news around 2 a.m., she heard that a possible tornado was heading towards Bunnell Crossing. As she warned her husband of what was coming, she immediately got her 11-year-old granddaughter and 9-year-old grandson in the bathtub and placed pillows on top of them.

“I did not hear no sirens at all going off anywhere. I did not hear anything of that…Our electric went off, and then it hit,” Bonnie said of the tornado. “…It sounded like a train blowing, and then all at once it sounded like a bomb blowed up. It just hit so hard. I said, ‘Oh my, God, we’ve lost our trailer.’ I said, ‘Russell, it’s gone.’ Then the kids came out of the bathroom crying, screaming, ‘Are we okay, mamaw? Are we really okay?’ I said, ‘Yes, baby, we’re fine.’”

But the damage to the family’s home was devastating.

“It (the tornado) shredded the whole back end of my trailer,” Bonnie said. “It took the porches…The water had soaked up in the house where it took my roof. It started leaking into the house, started damaging, and the ceilings were falling in.”

“We had bought a tool shed to put Russell’s tools in it. It took all of that,” Bonnie continued. “Then I had bought another little building just to keep Christmas stuff in. It took all of that. Then I had a carport that I went and bought. My car was under it. It spin the car around and put holes all in my car. We got it out, but it took my carport up. It’s tore all to pieces. Ain’t nothing left of any of that.”

Bonnie and Russell’s 23-year-old grandson from Michigan was staying in a camper on their property when the tornado swept through.

“It trapped him in it, and it shredded that trailer (camper). I mean, there’s nothing left,” Bonnie said. “He was trapped in it for a little bit, but he did get out. He got some cuts and scratches. I mean, he lost everything, too, clothes-wise…Then my grandson’s car was sitting there. Our wood splitter and the air tank went through his car and just demolished it.”

As soon as they were able, Bonnie and Russell began checking on their neighbors.

“We could only go so far,” Bonnie said. “We got to a couple of them, and we got Mr. Prescott out, took him down to the Amish school. He’s an older gentleman. Then we checked on Linda and Kenny Miller, and they was sitting in their truck. They said they were okay. Then the other lady that lived in front of me, her trailer was gone, too…It just demolished everything.”

As daylight came, Bonnie saw just how much damage the tornado had done to the community.

But in the midst of tragedy, Bonnie said it has been a blessing to have neighbors and the community come together.

“The community’s been tremendous about helping. They’ve been coming together, the Amish has, and doing stuff for us,” Bonnie said. “The McDaniel guy, he rented the motel for us for three or four nights. Then the Amish is going to try to put us up in an apartment that he owns, and then go from there until I see what our insurance is going to do…I thank them from the bottom of our hearts for what they are doing. They (the Amish) brought their stuff, loading stuff, and cooking food. I mean, they’re really trying to help everybody.”

“I wanna thank everybody for helping out and for coming together in the community,” Bonnie added. “I mean, I can’t thank them enough.”

Despite losing so much, Bonnie said she is just thankful that God saw fit to spare her family’s lives.

“I know it’s devastating. I know there’s a lot of things I can’t replace, but I definitely know we couldn’t replace our lives either,” Bonnie said. “It could’ve been a lot worse than what it was, but thank God that we got out.” 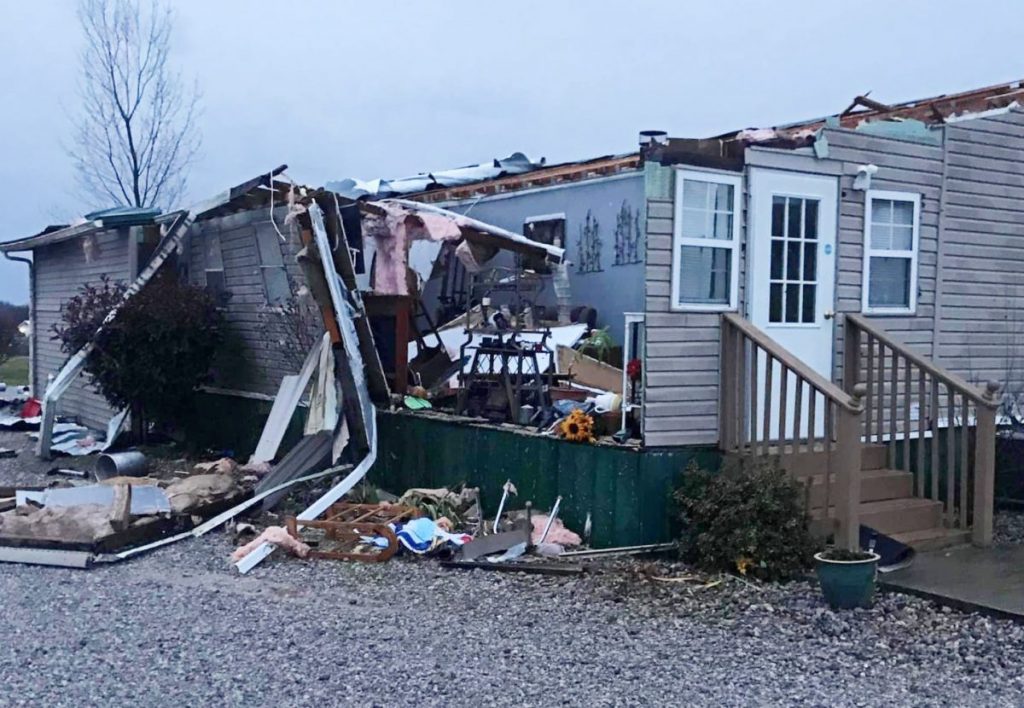 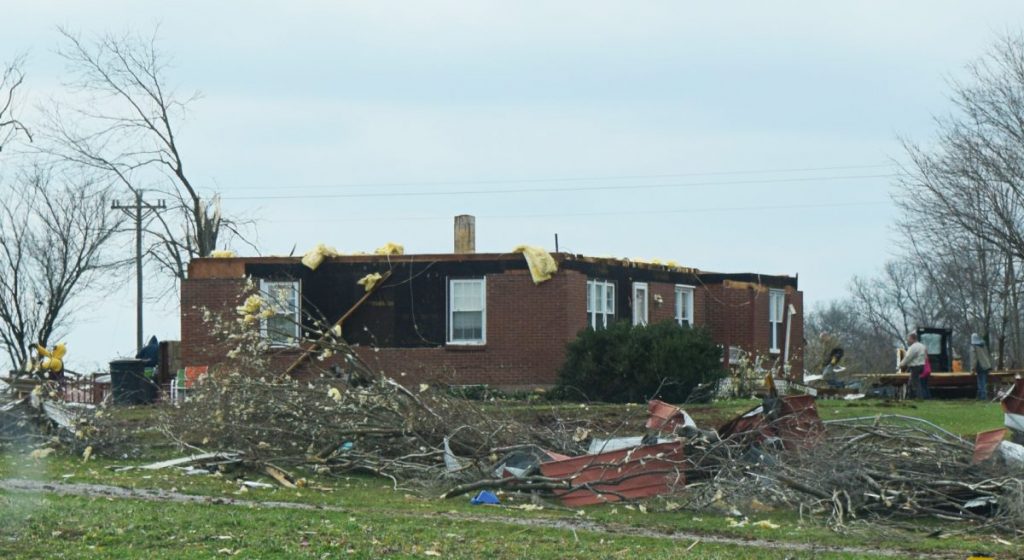 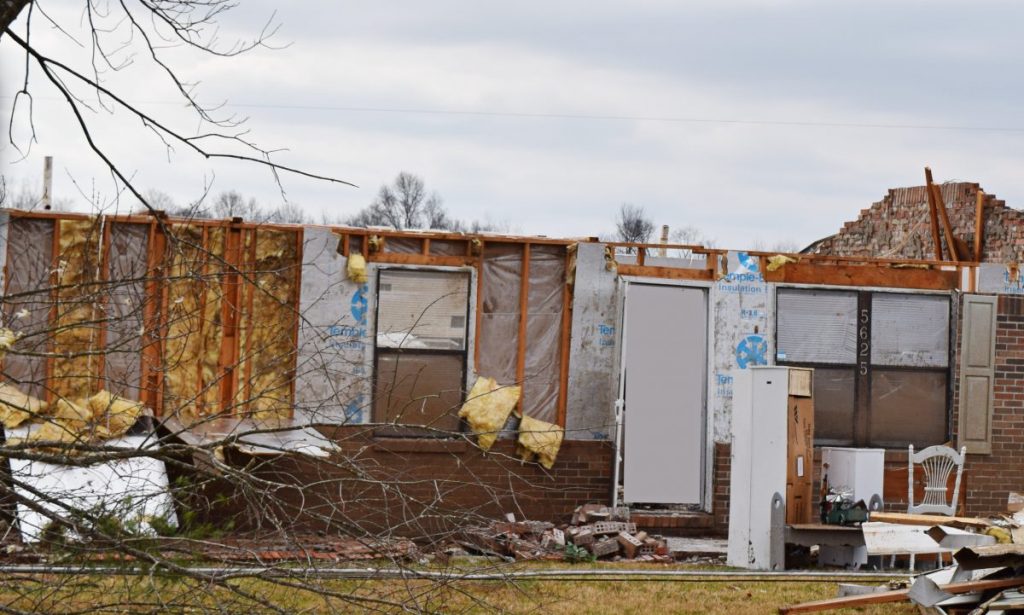 Home on Hwy. 88 in Hardyville. Photo by Mary Beth Sallee. 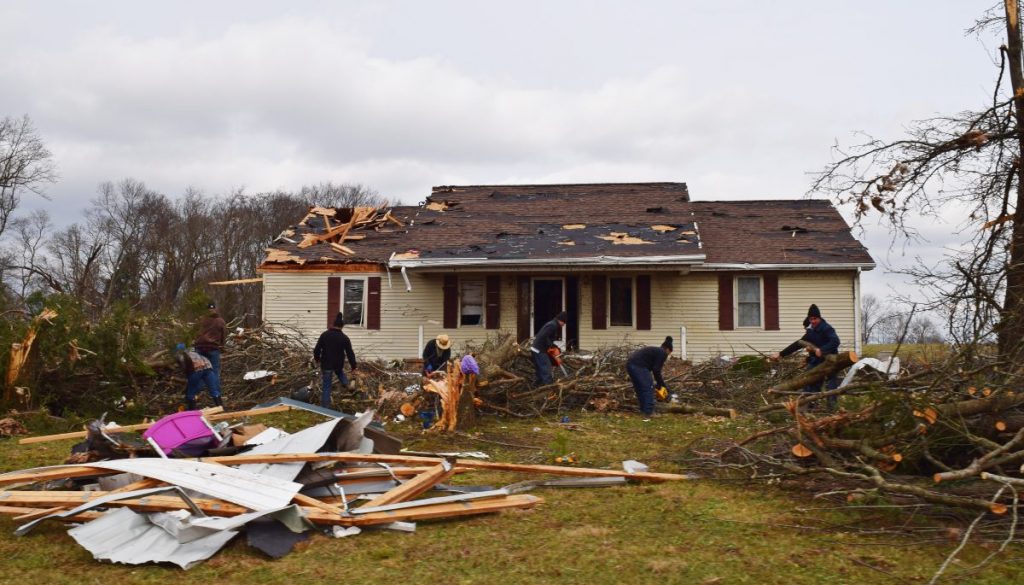 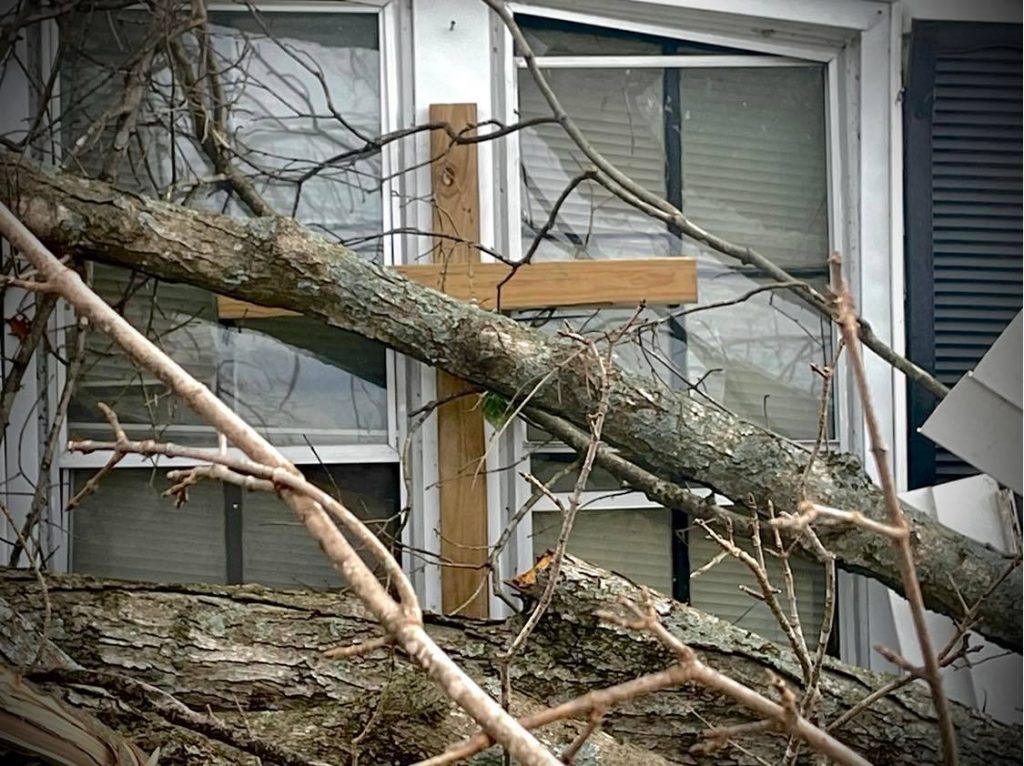 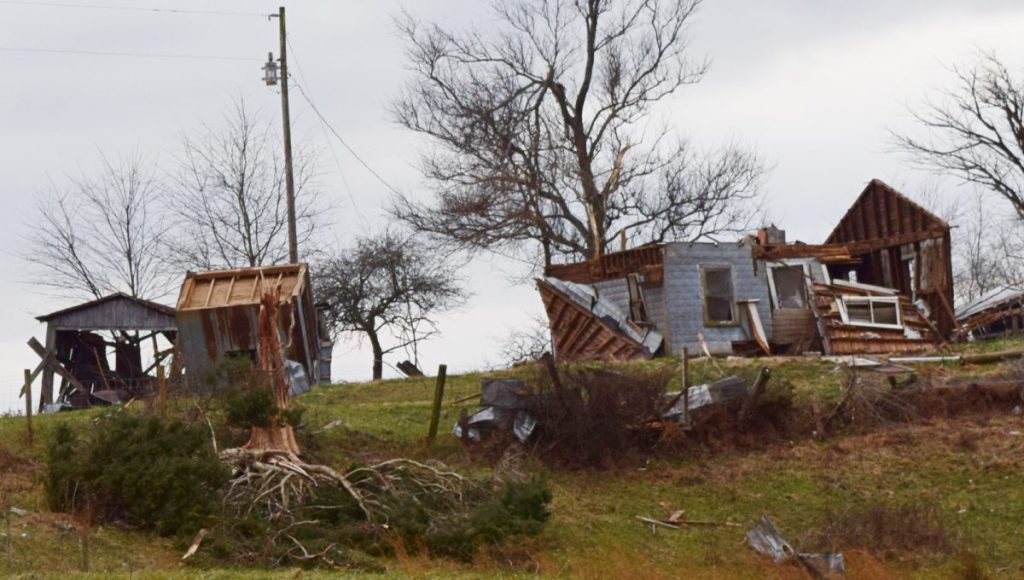