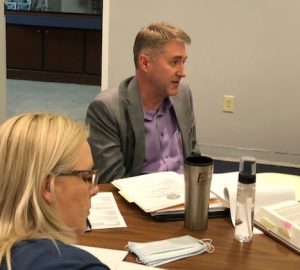 The Edmonton City Council met Monday, December 6th with all members present except Cathy Nunn who was feeling ill.

The board voted unanimously to appoint Terry Garrett to the Chairman position on the Metcalfe County Industrial Board. The position was left vacant by Matt South who turned in his resignation. Also reappointed were Donna Caffee and Mark Linkous.

KRS 83A.130 Mayor-council plan — Powers and duties of mayor and council. Section 9: The mayor shall be the appointing authority with power to appoint and remove all city employees, including police officers, except as tenure and terms of employment are protected by statute, ordinance, or contract, and except for employees of the council.

“It is illegal to have any employee of the city not appointed by the mayor. Ok. So you all do with that what you would, but I’m telling you there is no exception to that rule,” noted Pack who added it was a good time to address this at the first of the year.

Pack presented a proposed ordinance to raise the arrest fee from $10 to $30 for the City Police as requested. The first reading of Ordinance 2021-22-05 passed by unanimous vote.

Park Director Brian Garrett reported that the parks have been winterized and the sprinkler systems shut down. He also stated that the Christmas lights/decorations were installed and are ready for public viewing.