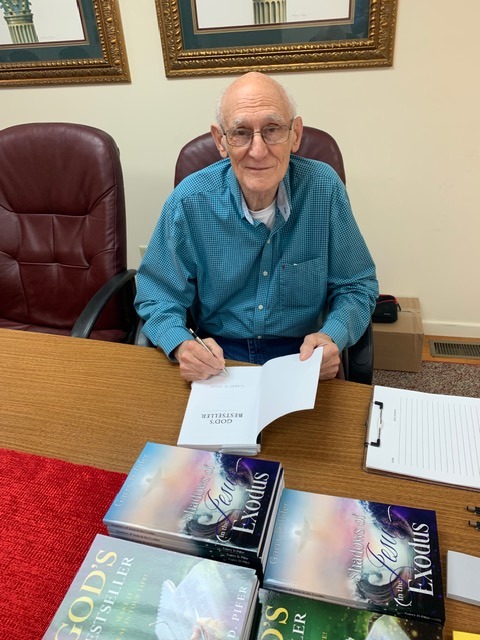 On Friday, December 10th, Metcalfe retiree and new author Garry Pifer held a book signing at the chamber of commerce for his two Christian genre publications.

My books are Christian books. The first one, which was published early September of 2020, God’s Bestseller: Make It Real I Your Life! is a handbook on how to study the Bible,” Pifer said.

“It was put onto my heart to get this book into prisons. I’ve been calling and contacting prisons and jails across the country and have now donated over 1220 copies.”

Pifer’s second book, Shadows of Jesus in the Exodus, is a study showing the fulfillment of the events of the Exodus in the final days of Jesus’ life, His death, burial, and resurrection.

Pifer sights his own personal transformation in Christianity as a source of inspiration.

“I grew up in a very legalistic church but always considered myself a Christian. It has been a journey out of that legalism and into what is New Covenant Christianity. This is brief but I do give a bit more in the introduction in my books,” Pifer said.

Although being a published author is a somewhat new experience for Pifer, writing is not.

“These are my only books to date I began writing my Biblical studies in article or essay form beginning in the 1990s. Many were placed on a web page and later a blog,” he said.

“I hope to write more books and they will be Christian/Biblical based.”

Garry Pifer was born and raised in Central Illinois. After high school, he went to college at a small private college in California, got married, and remained there for about 9 more years. He moved back to Illinois and remained there until March of 2004 when he and his wife moved to Metcalfe County. One of Pifer’s sons moved here in 2003 and wanted his parents to follow.

Pifer has been retired for several years.

“I held a number of jobs over the years but the 10 years or so before moving here I had a small business in Bloomington Illinois, sharpening saws and tools,” he said.

People interested in his publications may contact Pifer directly or go to Amazon to obtain copies of the books.