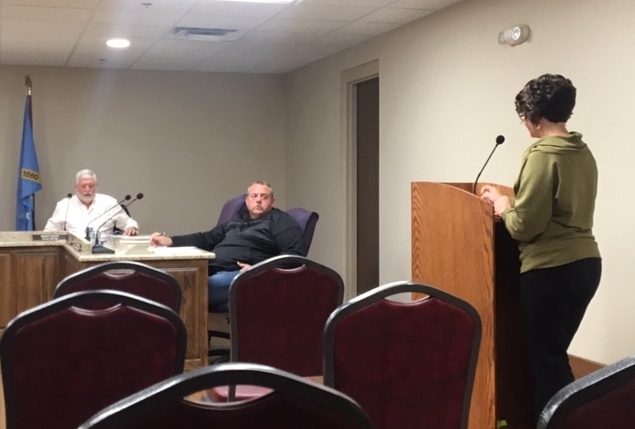 County Clerk Shannon Fields addresses Fiscal Court about the need for new voting machines. The machine is currently owned by the county have been in use for 16 years. Photo by Jennifer Moonsong

At the November 23 regularly scheduled meeting of Metcalfe County Fiscal Court, the main topic of discussion was the purchase of new voting machines for the upcoming election.

“This is a big election, because we are all on the ballot,” said County Clerk, Shannon Fields, who was present to discuss the variables.

Fields stated that the county needs 15 new voting machines; one of each of the 12 precincts, and two absentee machines to meet the needs of all existing precincts.

Judge/Executive Stilts questioned whether or not it was time for our rural county with a relatively small population to have fewer precincts. Fields stated it was her opinion, after meeting with the election board, to keep the same locations, sighting voter confusion as the reason.

“I have talked to several people about it,” said Fields. “I don’t think people would like the change.”

Stilts replied, “It is always time for a change, and it would be a lot easier on the county financially.”

Fields inquired as to whether or not the ARCA money coming to Metcalfe County could be used to fund the new machines.

Stilts replied that he would not be opposed to such, but that strict guidelines were in place regarding what the money is spent on, and that it was not yet decided how the funds would be spent.

Field stated that KACo could also offer a loan at 3.74% interest rate in order to obtain the new voting machines.

Regardless of how the new machines are funded, Fields stated that in order to get them by the primary they would have to be ordered within the month of December.

Otherwise, it would be the fall of 2022 before the machines were in place and ready to use.

The matter was tabled until the next regularly scheduled fiscal court meeting.

They also acknowledged the MCPL 2021 audit, approved the ARPA fund lost revenue for 2020 and approved a resolution for the Metcalfe County Industrial Park #2 Project.

Wes Jolly was reappointed to the industrial board, as his appointment expired in December. Matt South has officially resigned from the helm.

Claims, budgets, and inter-fund transfers were all approved.