Court unites on premium pay up to $9,900 per employee to be disbursed in three payments. 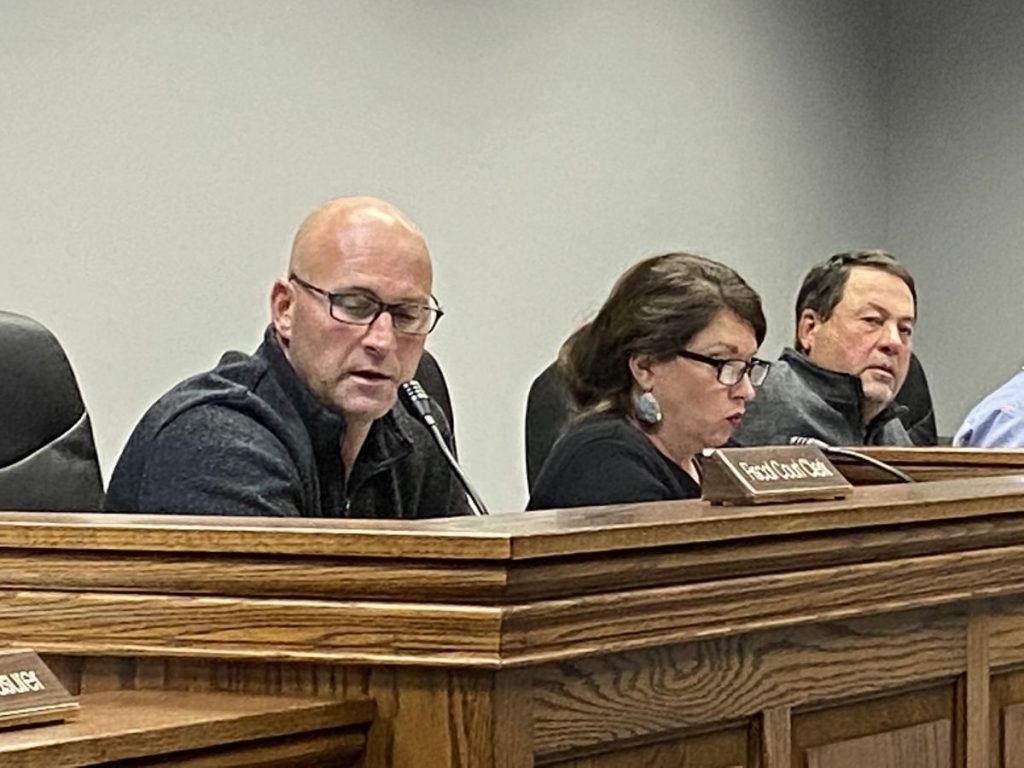 In an expected special called meeting, the Barren County Fiscal Court voted unanimously to approve premium pay for three payments of up to $3,300 per payment in the next year—a big reduction from the $36,082 initially proposed.

The court unified their previously opposing stances regarding premium pay after Magistrate Carl Dickerson called for a revote earlier in the month.

The new proposal brought forth by Magistrate Tim Coomer on behalf of the court was expanded to include paramedics, EMTs, and the eight local fire departments.

Premium pay is the term used to reward employees with a monetary check from the American Rescue Act Plan (ARPA) funds for their dedication to working through the COVID-19 pandemic.

Coomer’s original motion was for county employees to receive three separate payments based on $1 per hour worked with a maximum package amount of $3,000.00 per payment, which would leave the maximum amount that could be paid per employee at $9,000 by Dec. 2022.

The court later amended the amount to $3,300 per payment to help offset the taxes that would be taken out. The total payout will be up to $9,900.

Additionally, a one-time lump sum payment to the Barren employees of the Barren-Metcalfe EMS for $3 an hour based on hours worked for Barren County to be distributed to their personnel.

For the volunteer fire departments, each would receive $20,000.00 to be used for equipment purchases as needed. Coomer said attempting to decide who made runs and who didn’t would be difficult so the monies would need to be for equipment only and will require court approval when fire departments request the money.

Coomer added that all remaining funds would be held in the Barren County Treasury to be classified as ARPA funds for later spending as a part of his motion.

The hours worked that qualify for premium pay are hours only worked at their physical locations. As such, work time completed from home, video conference calls, vacation time, COVID-19 quarantines, etc. would not qualify as hours worked.

Some questions were asked regarding the taxes being withheld and whether the $3,000 payments were a gross or net amount. This led the court to unanimously vote to amend the amount to $3,300 to offset some of the taxes that would be taken from the checks.

The original pie chart that was approved on Oct. 19th then retracted less than a month later for ARPA fund goals appears to be off the table and was not revisited for any type of approval at this time.

Some magistrates have voiced the premium pay vote that began in October was a “rushed” decision due by Oct 31st and now that the court was made aware of a deadline extension for reporting to the federal government, the court has had more time to consider all the options and areas for where and how they should spend the premium pay funds. It was discovered that an e-mail was missed by the County Treasurer sent in Sept. extending that deadline.

In October, the approved $5 per hour for employees in a county-provided document had some employees receiving amounts that exceeded the maximum amount set by the federal government of $25,000.00 when combining retirement contributions. The top payout approved previously was a combined package amount of $36,082.50, which would have left the county in non-compliance of federal guidelines.

Additionally, the court previously approved a time frame for hours worked to include 1/27/20 through 9/3/21. At this time, no set dates were established. A year has been used as the basis of up to the $3,300 amount, with discussion of March 2020 until 2021.

The finance committee assured those in attendance and placed on the record that this proposal will have a legal opinion to assure this one is compliant with federal regulations.

Before Coomer introduced the new proposal, he wanted to remind everyone why the county even has ARPA funds.

“Let’s remember how this money came to Barren County,” Coomer said, “People across our country have suffered and died because of this pandemic. In Barren County, we’ve lost approximately 157 citizens, which is more than Barren County even employs.”

Coomer said those that had worked on the new proposed plan feel it is a fair plan and is meant with appreciation and expresses generosity to those who worked on behalf of the county for all residents during the pandemic.

Dickerson wanted to ensure employees would at least receive a payment before Christmas and was assured that could happen.

“I think if we had started here, $9,900—I think that everybody would have been happy,” Riddle said.

Magistrate Jeff Botts recapped what had led the court to where they are regarding the ARPA funds at the beginning of the meeting.

Barren County Judge/Executive Micheal Hale made a motion to amend the fire department portion to clarify they’d receive the $20,000 in addition to their regular contributions from the budget. The amendment passed unanimously.

Hale commended the work done by Magistrates Dickerson and Coomer, who were more vocal in their opposition of the “rushed” payout for premium pay voted on in October. Despite the opposition, magistrates questioning the premium pay made it clear in previous meetings that they were fully supportive of rewarding employees.

Hale added what he was most proud of from the court was that “maybe sometimes it takes a little division to make us stronger” after expressions of gratitude for the employees of Barren County.

Regarding the retirement aspect of premium pay, County Treasurer Jenny Hoffman told the court that it would be impossible for the payroll system to separate or calculate the way the court was asking for it to be done.

It is expected, based on Hale’s request, that Administrative Budget Committee members will meet with Hoffman to review the payroll system in regards to the premium pay.

Chair of the Transportation Committee Billy Houchens requested to close three-tenths of Quarry Road in Green Valley. Hale said Scotty’s requested for a section of the road to be closed due to dumped garbage as well as drug and other activity that happens in the area.

Hale said it was illegal for the county to close or gate off any rural secondary roads. Scotty’s owns both sides of the road that the County has maintained. It is expected the first reading over the matter will take place in December to address the issue.

Chair of Building and Property Committee Tim Coomer reported that during the remodel of the current courthouse, some damage was found with rot in the gables on either side. He said the Administrative Office of the Courts (AOC) approved the funds requested for the additional work needed. The court unanimously approved a reimbursement by the AOC of $7,675 with a down payment of $2,300.

“She will be the second female in the state of Kentucky to assume a role of this magnitude,” Hale said.

The Transportation Department Operations Manager Scott Taylor told the court that all 15 employees in their department support the appointment of Gibson. 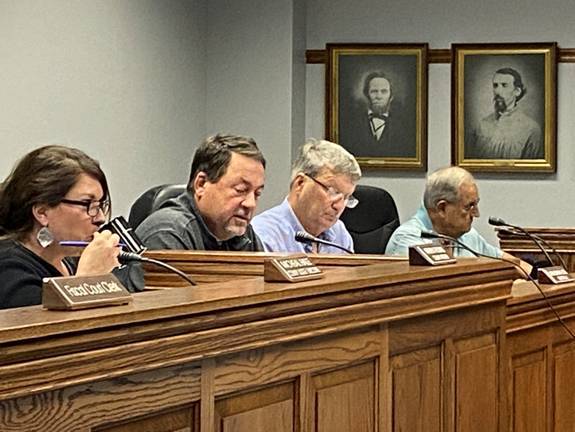 The Barren County Fiscal Court approved premium pay for employees up to $9,900 spread out over three payments based on hours worked for an undetermined timeframe during the height of the COVID-19 pandemic. From left, Barren County Attorney Kathryn Thomas, Magistrates Tim Coomer, Mark Bowman, and Billy Houchens. Photo/Jeff Jobe